That is us, JuggernautWarmachine, on World 3 in Lord of Ultima, list on the front page of the game. 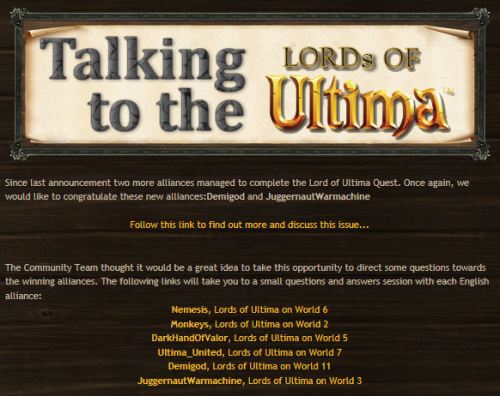 It only took about a year to win, though they didn’t actually put in the way to win until a couple of months back.

Winning will likely take less time now that there is, you know, a way to win.

Technically, “we” won is a mis-statement.  There were actually four alliances that worked in conjunction to win.  I was in one of the support alliances, JuggornautWarmachine (note the slight spelling variation) and I was only part of that because I still appeared to be “on the books” of another alliance I had left and thus got an invite when they merged.

So there is no little “Lord of Ultima” crown next to my name.  Not that I really deserve one.

I helped a little bit.  I sent excess resources and a few troops to help out, but mostly I played a very long game of SimCity as I figured out how best to build up cities.  I don’t think I altered the outcome in the slightest when it came down to it.

Still, I learned enough that I might actually know what I am doing should I decide to play again.

Not a bad game overall.  Definitely a team sport.