Turbine has announced the next expansion, Rise of Isengard. which should arrive on September 27th of this year.  This will bring out new zones and raise the level cap to 75 from the current 65.

However, my highest level character is only 44.  I haven’t seen any of the key content of the first expansion, Mines of Moria, slacker that I am.

There is, perhaps a glimmer of hope.

As with past LOTRO expansions, there are some pre-order incentives to consider.

There are, in fact, three tiers of pre-order, base, heroic, and legendary.   The differences between them is mostly about access to a variety of cosmetic items (including horses), the opening of some content that I already have with my lifetime subscription, and some additional Turbine points.

But all of the packages include one key item, Derudh’s Stone. 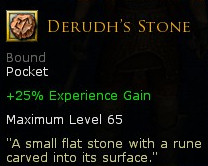 I’m not sure who Derudh is, but his stone grants a 25% boos to experience gain when equipped.  And it is a pocket item, perhaps the best slot in the LOTRO equipment hierarchy. (Giving one the answer to the eternal question, “What has it got in its pocketses?”)

It is actually very nice that this is an item as opposed to a potion with a timer, as EQ2 tends to hand out, or a general cut in the experience curve with each expansion, the WoW way of things (though that tactic has been used by EQ2, LOTRO, and others as well).  When you want your experience boost, you can equip it.  If you feel the need to slow down, you can just take it out of your pocket and put it back in your bag.

Like most such items, you get the stone on every character, including characters you make going forward.  It appears in your bags when you log a character in or create one anew.

I went through some of my characters, just to see who got what, being of a suspicious mind.  I was surprised to see that almost all of my many characters on Firefoot already had an item in their pocket.  My mind must be slipping.  Back at launch, such items were somewhat rare.  I would bet that if I logged on to Winfola and checked characters made at launch, few would have anything at all in their pocketses.

As for which pre-order I chose, I went heroic.  And I did it specifically to get the green versions of the special cosmetic gear and horse. 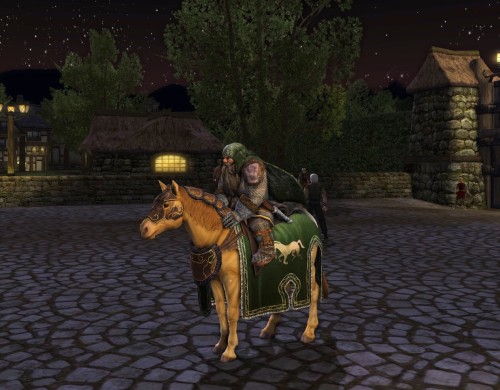 The pre-order process is not without wrinkles, the first being the order system seeming to insist that you create a new account (the term it uses!) when you know you already have one.  But it really just wants an email address to which to send the activation code.  You might want to check out the pre-order FAQ put together by A Casual Stroll to Mordor if you find yourself at a loss.

Will a pre-order item from the third LOTRO expansion help me get to the FIRST expansion?

What do you think of this sort of experience boost item?

Would you rather have something more temporary like a potion with a timer, or something more sweeping, like a general cut in the experience curve with the launch of an expansion?

8 thoughts on “Will This Help Me To Moria?”