Telara is, of course, the world in which the game Rift takes place.

And it seems that the temptation of the Rift Digital Collector’s Edition for $10 was too much.  I broke down and bought it about an hour before the offer expired last week.

But my purchase was not completely impulse.

There was some speculation as to whether Rift might be a decent vehicle around which to reform the instance group after its summer hiatus.  Autumn is upon us, after all, the traditional start of the virtual campaign season.  It is even raining in Silicon Valley this week.

Of course, I have no real interest in playing Rift solo, so I prodded Potshot and his wife into coming along with me.  The grabbed the 7 day trial version and we were pretty much downloaded, patched, and ready to go by Saturday.

Steam sort of let me down.  One of the few things I will grant Steam is that they make patches and updates easy.  Not so with MMOs though, or so it seems.

I had Steam download the game client over night, launched the game in the morning, then had to let the client launcher patch another few gigabytes of updates.  (This is one of those things that I like about CCP, the EVE Online client is always up to date when you grab it.)

So Steam is completely useless past the purchase, as far as I can tell.  It is just a log in I have to do before I can launch the client and actually log in.

And if that hadn’t worked, I was just going to download the client from Trion, another option, to break the link with Steam.  Unless connections like that just bug me.

Anyway, by Friday night I was able to log in and make my first character in Rift since beta.

I picked the Alsbeth server (Hey HZ!) and went with the warrior archetype, starting with a beastmaster soul.  This was on the side of the Defiant, whom I recalled had worse character models (went with an ugly male Eth rather than one of the ridiculous male blue meanies) but a less annoying set of starter quests than their opposition, the Guardians.

Over the course of the weekend I got him to level 15 and arrived at the Defiant city of Meridian.

I also rolled up a rogue and cleric archetype and ran them both out to the Freemarch.

The whole soul mechanism still seems a bit of a blessing and a curse to me, but I am not a fan of having too many choices.  One of the joys of going back to play EverQuest with Potshot earlier in the years was freedom from choice.  When you played a class in old EQ, you got what you got and if you didn’t like it you could go play a ranger and really feel slighted.

I get that some people like the mix-and-match element of the souls, but I have not been at the game long enough to what to pick to do what I want to do.  So I just pick what sounds interesting, knowing that a few months down the road somebody will say, “LOL noob! You went with beastmaster/champion/warlord for warrior DPS?”  I just hope the peril of bad choices is not as great as it was for Champions Online at launch.

And with three souls, there are three talent trees to compare.  Which do I climb and which do I ignore?  Too much to think about. 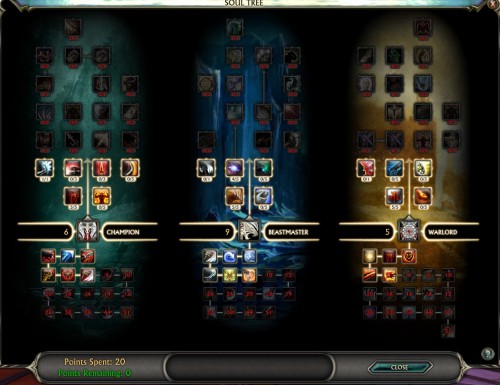 Pretty much just winging it...

But souls and talent points and the like were an issue for the future, we were scouting to see if Telara could potentially be a place for the instance group to regroup before SWTOR comes along. (Everybody seems to be on board for that.)

Fortunately, Rift seems to have improved some since my time in beta, and it was still very smooth back then.  If anything it seems even more refined.  And that was an important point.  One of the things that ended up failing for people in the group with LOTRO and EverQuest IIx was the user interface.

When World of Warcraft is your benchmark for interface responsiveness, both of those games clearly come up short.  I tell myself that the difference isn’t that great, and then I go back and play WoW and realize that it is.

Rift comes as close to WoW in smoothness as any MMO I have played recently.  Like the rest of the game, while it tries to set itself apart… it doesn’t mimic WoW exactly in any look… it still strives for a sense of familiarity.

It isn't an MMO without boars!

And with the dark atmosphere in the starting zones, the choice of fonts, and the public group/public quests (rifts) all going on, it feels like it plucked some of the more striking bits of Warhammer Online and laid them on top of a WoW PvE world.

The fights themselves can take a bit and you can easily get in over your head and die in the new player zones.  I will nit pick that it can be tough to tell which mobs require a group and which do not.  I suppose I should have assumed that giant just outside the Defiant starting place was more than I could handle, but I did not see any feedback telling me to steer clear when I targeted and examined him.  But I might be missing something in the UI.

Can I take these guys or not?

The world itself is as pretty as it seemed in beta.  Out in the Freemarch, where the skies are blue when the sun is up, the rifts make pretty backgrounds. 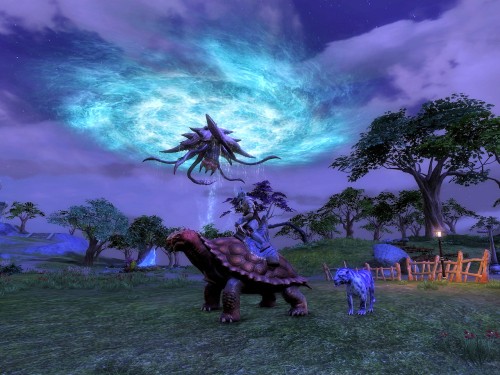 Turtle before the rift

They seemed to be everywhere as I was working my way through the quest line.

Rift in the distance

And, as I suspected might be the case seven months after launch, at least at the early levels, most of the rifts were going uncontested.

Another one over there!

If I was here to play the game solo, this would probably seem like a bad thing.  But since the idea is to get the group together with the intent of taking on group content, having rifts handy and available might very well be a good thing.  The five of us can form the nucleus of rift hunting raids as we work our way through the game.

And frankly, I would rather have that than the way rifts seemed to go in beta, with dozens of people rampaging after each rift in a giant, endless zerg rush.

It's the tier 1 Telara marathon!

By the end of the weekend, at least Potshot and I thought that Rift might serve well as a way point for the instance group.

An email out to the group regarding Rift was well received.  I think the group is interested in the new game, which Potshot described much more succinctly than I, as well as getting back to a regular gaming night with the whole group.

Earl is actually tied up for the next two weekends, so we won’t be jumping into the game as a group right away.  But everybody has committed to having the client installed and patched up so we will be ready to go.

It might be a good time to take a look at the Guardian side of the game while we wait.

But it looks like Rift will be where you will find us for the next few months.