Just because I have been on an EverQuest coverage binge with the Fippy Darkpaw progression server, I thought I would mention that SOE has announced that the 18th EverQuest expansion, the Veil of Alaris, is available for pre-order from now through November 14th. 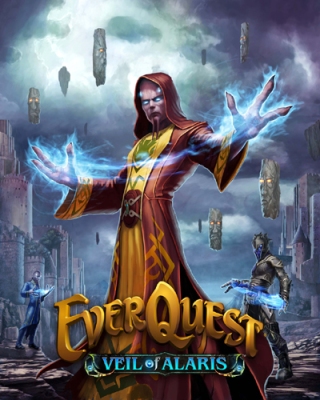 There is also Digital Collector’s Edition because, God help us, there always is one of those these days.

There are two items, according to the list, that you only get in the November 14th or before pre-order with either the standard or collector’s edition.

The painting actually sounds pretty good.  I’d like that in EQII, where I can actually afford the upkeep on a house.

The expansion itself adds the following to the game, copied directly from their site, so the prose is all official SOE and not my own:

I have to imagine that the whole improved hotbar system is most likely the only feature I will notice, given that I am in the low 20s on Fippy Darkpaw and somewhere in my 40s on Luclin.  And I am going to guess I will get that for free no matter what I do.  So I will likely pass on this expansion.

I suppose it says something that SOE at least thinks it can sell a 90 dollar box… a 90 dollar virtual box… for the 18th expansion of a 12 year old game.

I mean, the 90 dollar WoW collector’s editions take up a crap load of space on your book shelf, but at least you get a physical art book and the music from the expansion on a CD.

I guess they know who they have over a barrel… those people who need to have it all, even if “all” is all virtual these days.

How about you?  Who out there is eager to hit level 95?

Or who is at least happy to see an update to the EQ hot bars?

Over at the Need for Speed World home page, there was a little news item I hadn’t seen any place else so far.

Electronic Arts is going to unify the currencies used for… most of their Play4Free titles.

Play4Free has six titles under its banner:

Of those titles, the following four are going to be merged into a single currency that will be shared across games using the same account.  Since EA has been on the great account merger hunt, which came as a bit of a shock when they merged my Star Wars: The Old Republic account into another account, all the EA games I play, plus Origin, EA’s new digital distribution platform, are now on a single login.

I am not sure I like that.  I certainly want an authenticator for my EA account, since getting into one gets you into them all, so I have to worry about their low rent web games paying as much attention to security as their triple-A MMO.  I am sure that seemed like a good idea to somebody. 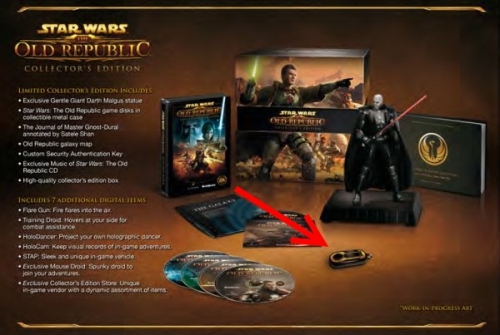 Gimme that thing there!

Anyway, the following four currencies will be going away.

Those four will be replaced by a new currency which will be called… and this is really a sign of creativity at EA… Play4Free Funds.

Yeah, somebody in marketing got a bonus for that I’m sure.

As for the other two… well, Dragon Age Legends is on Facebook, so if it uses any currency, it is probably Facebook Credits.  And BattleForge… I don’t know why that isn’t on the list.  But I have never tried it, so no matter.

In a way, this might be a good thing for me.  I have some diamonds in Lord or Ultima, which I stopped playing since updates killed the game for me (I was going to write about that, wasn’t I?) which I might now prefer to use in Need for Speed World.

There is no word on the exchange rate… how much I will get in Play4Free Funds from my diamonds and speedboost… nor has there been any hint on what the new pricing schemes will look like both in and out of game.  But EA had better have that all lined up because this whole consolidation is supposed to go live on November 16, 2011.

Probably the hardest thing about going back to visit TorilMUD is remembering the odd syntax that used to be second nature to me at one time.

Those two I picked up pretty quickly.  After that, it started to become a challenge.

The weekend kicked off with Gaff’s conjurer Nerral dying.

Yes, I got him killed by the Tako Demon, but that was later, after we sort of got ourselves back into the groove of the game.  That was preceded by some “getting back on the bicycle” antics.

It started with an IM from him tell me he had died in the Faerie Forest and asking if I could help him get his corpse.

I had to chuckle because Nerral is a level 50 conjurer and the Faerie Forest is… a bit tame.  Oh, there are things in the Faerie Forest that can kill any player going at them solo and unprepared, but I didn’t think he was going after Finn or his ilk, which pretty much left Lubberkins and Flower Fairies. 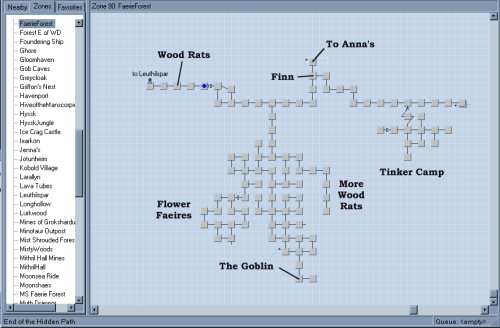 Welcome to the Faerie Forest

I logged on with my druid and caught up with him at the Leuthilspar gate, which was closed and locked.  He was waiting for it to open.  I had to remind him that you can just say the magic word (“peace”) and it unlocks.

That was once we learned how to speak again (see above bit about forward slash) and not incessantly repeat the last thing we said/did (and the bit about not hitting return).  Once we got past that, he explained that he had summoned an elemental, the conjurer’s stock in trade, and it had turned aggro on him.  These things happen, one of the perils of the profession, and which is something a conjurer can usually deal.

Unless, of course, the conjurer doesn’t remember any of his combat spell, in which case an angry elemental is likely to beat him into the ground, which is exactly what happened.

So he wanted to know if I could run and get his corpse, in case the elemental was still lurking.

And then we stood there for a minute while I tried to remember how to form a group.  Finally I said, “consent me,” which he did, and then I could type in, “group Nerral” which formed the group.  Having him “follow” me would have also allowed me to form a group, but I also needed consent just in case I needed to move his corpse.

That accomplished, I left him there while I ran off to the Faerie Forest.  It was dark and he didn’t have a light source, so he was kind of stuck there.  Thanks to innate infravision, he could see the room exits, but he couldn’t see anything in the room.

I started looking around for his corpse, which he helpfully described as “near a lubberkin.”  That is like saying something is “near a parking meter” in your average downtown setting.  Still, there aren’t that many rooms in the Faerie Forest.  I just had to run through about two thirds of them before I found his corpse.

At his corpse, I immediately cast my spell “moonwell,” which opens a portal between two people on the prime material plane, so long as they are in rooms that all teleportation.  The devs love to limit your options by flagging rooms !teleport.  Leuthilspar, for example, has only one room within it where I can cast moonwell as I recall.

This is why I left him out on the road outside of Leuthilspar, so I could open a moonwell to him.  My expectation was that he could then hop through the moonwell and grab deal with his corpse.

Unfortunately, it was night time, he was in a room without a light, so he couldn’t see the moonwell and thus could not enter it.  I had to bring the corpse to him.  This meant a bit of thinking to come up with the right syntax.

A player corpse can be dragged to move it from room to room, and can be indicated by the player name or the generic name “pcorpse.”  The syntax for that, which I recalled pretty quickly, is “drag pcorpse west” to move the corpse out of the west exit.  But into a moonwell, that took a bit more digging in the unused spaces in my memory before I came up with the right set of commands.

They are the title of this post.  Drag pcorpse enter moonwell.

That finally remembered, I was able to open another moonwell to him and drag his corpse through.

After that, we decided to warm up in Kobold Village.  That seemed like a good place to warm up.  And we know how that turned out.

Still, that forced us to remember the rudiments of the game.

Now I have to remember what all the scripts, triggers, and short cuts I programmed into ZMud over the years actually do.