With last week’s announcement that EverQuest II is going free to play on all servers, and DC Universe Online having just made the transition to free to play, Sony Online Entertainment feels like it has turned a corner. 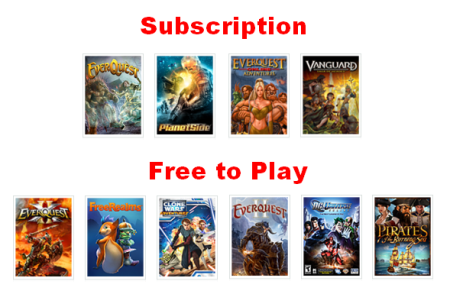 The SOE Options for New Players

Technically, the title line up will shortly be five free and five subscription, if you consider EverQuest II to be a single merged game now, and you count Star Wars Galaxies.  But new players cannot join SWG, and it will be going away on December 15th in any case.

Okay, Pirates of the Burning Sea isn’t popular by any stretch.  But EverQuest II is arguably the flagship game for the company.

While the subscription only lineup looks pretty long in the tooth.

Those are some old titles in terms of video games, and the only one that still draws a crowd is EverQuest, the one time champion of the subscription MMO world.

So what happens to subscription titles at a company that appears to see free to play as the future?  Will any of the remainders join the free to play bunch?

EQOA, peaking at ~30K subscribers, has never been a big title.  It is only for PlayStation 2 and hasn’t seen any new content for almost five years.  It is being sustained as long as it remains profitable to run, but its days are numbered.  I think the era of benign neglect will continue until the subscription base dwindles to the point that SOE turns out the lights. (You can read more about EQOA over at Massively or, as Harbinger Zero suggested, check out Stoney’s EQOA Blog.)

PlanetSide, also something of a dormant title, down a single sparsely populated server.  PlanetSide will remain until PlanetSide 2 launches and that will be that.  PlanetSide 2 will, of course, have a free to play subscription model.

Vanguard is probably more popular than Pirates of the Burning Sea, which made the move to free to play, so it seems like it might have a chance for a move as well.  But PotBS is not actually an SOE title.  SOE only hosts and publishes the game.  Flying Lab Software is responsible for development and apparently are able to sustain themselves on its meager population.

Vanguard though, appears to be in a maintenance only mode, with no devs assigned to it.  A transition to free to play requires an investment of resources.  Previously SOE opted to add in LiveGamer, a system that allows players to buy and sell from each other with realm money; sanctioned RMT.  However, LiveGamer is going away, so perhaps the door is open to some change on free to play front. (Though LiveGamer seems to be doing okay without SOE.)

But somehow I doubt it.

There are only two groups of players that are going to be more prickly about adding in a cash shot with enough viable items to make money, and one of them is Vanguard players.  And for a game that is not generating enough revenue to get more than bug fixes slowly over time, the possibility of annoying the player base has to be viewed as a serious risk.  My guess is that SOE will just leave Vanguard on the subscription model and keep it around as long as enough people are willing to pay.

And then there is EverQuest.

Here is the one game on the list that has the population and the name recognition to making going free to play a viable option.

But EQ players are the second group of prickly players when it comes to cash shop items.

On the other hand, SOE has actually been working on the UI in EQ.  One of the features of the latest expansion, Veil of Alaris (which goes live today), is improved hot bars which, from the description, sound like they are going to try to make them work the way they do in most current MMOs.

That makes me wonder if SOE is planning some sort of free to play option for EQ in the next year or so.

What do you think?  Will EverQuest get a free to play option?  Will Vanguard?

And will it matter?

While the free to play option is out there, the subscriptions still exist if you want to play without some of the more onerous restrictions on a free account.  And with the new and attractively priced SOE All Access available if you play more than one SOE game, is free to play anything more than an unlimited trial at SOE?

Do you still have to subscribe to “really” be playing any of these games?

10 thoughts on “SOE – What Other Titles Will Go Free to Play?”