John Smedley,President of Sony Online Entertainment has been active on Twitter again, this time giving updates on how DC Universe Online has been doing since the transition to a free to play business model.

Really happy with how DCUO is doing. Here are some interesting facts

DCUO's playerbase is growing at 6% a day.. great to see all the new players!

More than 85% of daily log-ins are returning players.

QFT – You never know when a tweet will face a delete:

Really happy with how DCUO is doing. Here are some interesting facts

DCUO’s playerbase is growing at 6% a day.. great to see all the new players!

More than 85% of daily log-ins are returning players.

The change in business model appeared to have lured blogger Green Armadillo of Player Versus Developer into the game, and he has been posting about it quite a bit.

Have you joined the rush into (or back into) DCUO since the business model change?

One of the more controversial of Blizzard’s upcoming Diablo III release is their plans to offer an auction house where players will be able to purchase in-game items from other players for real money.

For me though, the history of Diablo II was enough for this decision to be completely logical from Blizzard’s point of view.

If you played Diablo II as a single-player or LAN party sort of game, avoiding Battle.net and eschewing the ladder and other competitive measures, the idea that there was a very active RMT underground for the game might seem bizarre. (That is my word of the month.)

Heck, even if you were a big player on Battle.net, you probably still find it odd.  I know I do.

But it was out there, whole sites dedicated to nothing but selling you that piece of equipment you were dying to have.

All of that was brought back to mind when I was over on Cracked.com this weekend (the site is addictive) and noticed one of the ads at the bottom of the story through which I was paging.

Between ads for T-shirts and Rift Platinum, I saw this: 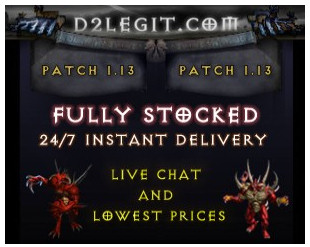 I was shocked.  Diablo II has been out for 11 years.  It isn’t an MMO.  And there are sites out there not only still willing to sell you equipment for the game, but which think the plan is lucrative enough to buy ad placements to help promote it.

I’m not even going to obliterate the URL in that ad, as I would with some skanky WoW gold seller, because I am afraid you will think I made it up.

And yet, there it is!

You might not think that an 11 year old game worthy of such efforts, but somebody does, and you can be sure that Blizzard is aware of it.  And if you cannot solve a problem… and nobody has shown they can (or will) expend the resources required to do so… you might as well just take control of the problem.

And so Diablo III will have the aforementioned auction house complete with real money option.

Of course the next scam will be to convince you that you can profit from working this real money auction house.  That sort of thing will now make money for Blizzard, since they are taking a cut of each transaction, so you can expect them to be pretty quiet on that particular subject.

Okay, now it might seem that I am completely using that headline as a troll for this post.

But this is also a little bit of MMO blogesphere history, so I claim legitimacy!

A couple of years back, WoW Insider, which is basically the “All World of Warcraft All The Time” sister publication of Massively, managed to get a hold of the domain wow.com.  Up to that point, if memory serves, they used the domain wowinsider.com.

Overjoyed at scoring such a good domain name, they changed the name of the whole site to WoW.com.

That lasted for a while… what, a year maybe?

This is a blog campfire tale, in the great oral tradition, so there are no exact dates in my head.  They aren’t important.

What is important is the story.

Anyway, after some time passed, their parent company, whatever passes for America Online these days, decided that such a cool domain name was wasted on them.

And what did AOL do with this hot property, this asset too valuable for a mere gaming site?

Why, this great URL was seen as the cornerstone of their plan to create yet another Groupon clone for the web, which they planned to call Wow.

Because that is what, more sites attempting to clone the success of others.

And how did that work out?

Due to an outdated bookmark deep in Firefox, I stumbled upon the site this morning.  AOL is shutting it down.

So much for that idea!  But yet another AOL acquisition will be providing local coupons.  I wonder how the people at Patch.com feel about picking up that task?

And what will become of the wow.com domain?  It is way too valuable to let it lapse.

Maybe AOL could sell it to Blizzard?  They certainly seem to have money.

What would you do with the domain wow.com?