Oh the wacky things that come out of the mouth of Dr. Richard Allen Garriott de Cayeux! 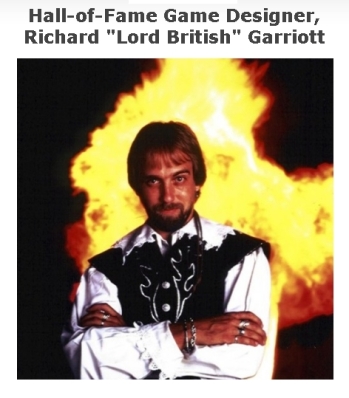 The first image from the Portalarium site

Now maybe the press is just catching him at the wrong moments, but I am having problems parsing the meanings of his statements of late.  He seems to be all over the map.

About a month ago he was scolding EA and Blizzard for “letting” Zynga have the casual market, which seemed to me to be like scolding Peterbilt for letting Daihatsu beat it in the Kei car market in Japan.  And on thinking about it, since he is all about the whole casual game scene at the moment, he seems to be complaining that EA isn’t in a position to kick him in the ass yet again.

Then he starts talking about his ultimate RPG game, all the while hinting that if only EA would hire him back and give him creative control, (or at least just let him use the name and IP) he could banish elves and ninjas and make the Ultima franchise great again.  But that didn’t sound very casual.

This was followed up by the big interview over at Industry Gamers where, after comparing himself to Tolkien, he goes on to say that gaming consoles are doomed… we MIGHT see one more generation… and that the future is in portable devices, which coincidentally happens to be a platform he is targeting.  At least that seemed to be clearly self-serving in a Bobby Kotick sort of way.  I can grasp that, especially when I recall him saying at GDC 2007 that MMOs were the way to go… because, of course, he was making an MMO. (He’s done with MMOs now.)

On top of that, add in the background noise of one of his manors going up for sale, which includes some stunning amenities, winning his lawsuit with NCsoft, where his last big effort, Tabula Rasa  went live 4 years ago and closed 16 months later, his space faring ventures, which gets played up a lot, the rather limited focus of in his company, Portalarium, with its loathsome twitter feed, the big output from which appears to be online Poker and Blackjack, and how he runs the company via robotic interface… and an appearance with Martha Stewart…

…you start to wonder how seriously you should take the guy these days, at least when it comes to computer games.

You cannot take away what he has accomplished.  The Ultima series of games was huge and innovative and influential and in ways remains unmatched to this day.  But even that series seemed to be faltering until Ultima Online came along.  And since then his efforts on the gaming front seem to have dissipated.

Thus while the thought of EA bringing him back and, say, teaming him up with BioWare to produce the ultimate Ultima RPG is a great “What if…” scenario, it seems only just slightly more likely to happen than EA handing Richard Bartle a pile of money to create the ultimate virtual world.

So if he is serious about building his dream RPG, it seems like it will have to be in a land besides Britannia.

All of which still leaves me in kind of a “what the hell?” state of mind.

Would you want to play Mr. Garriott de Cayeux’s ultimate RPG even if it wasn’t set in the lands of Ultima and he had to place himself in game as… I don’t know… Seigneur Cayeux sur Mer?

Would you play it if it was only on Android or iOS?

Would you play it if it involved talking to trees?

Has anybody checked the color of his urine lately?

14 thoughts on “The Madness of Lord British”