Raptr, the game play tracking and social network tool thing that seems a lot like Xfire… because it was created by the same people who made Xfire… where was I going with this…

Raptr announced their Most Played Games for 2011, restricted to games launched in 2011, despite the fact that we still have 23 days to go here.  Maybe nothing else important is launching this year. 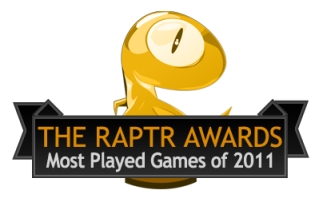 What?  Star Wars: The Old Republic is launching this year?

Well, too late and too bad!

In fact, of the categories Raptr chose to acknowledge, MMOs barely make the cut.

And while you might think “Open-World Game” would include MMOs, that is actually just single player open world games like Batman: Arkham City or L.A. Noire.

No, the only mention of MMOs is in the final category, the one about Paid-to-F2P conversions.  That covers MMOs, because it seems if you ran some sort of crime or crime fighting MMO… Champions Online, DC Universe Online, City of Heroes, All Points Bulletin, or… well, it doesn’t quite fit but I’ll make it fit… Global Agenda… then apparently 2011 was your year to go Free to Play.

So, from one angle I suppose congratulations are in order.  Raptr managed to do a “Most Played” list that squeezed in MMOs from such an angle that they avoided mentioning any fantasy MMOs… like Rift maybe… along with Star Wars: The Old Republic.

Was it really that bad of a year for MMOs?  I know my 2011 MMO Outlook ended up on the sad end of things, but were there really so few launches?