As lukewarm as I was about Star Wars: The Old Republic during beta, I have found some pleasure in reading the myriad of viewpoints on the game.  People have all sorts of things to say about how good the game is, how it plays as an MMO, how innovative (or not) it is, and what the long term prospects look like in a galaxy far, far away. 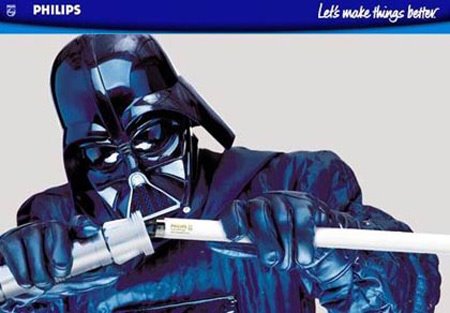 Hold on a second, I am almost ready…

Tycho and Gabe at Penny Arcade seem quite enthused with the SWTOR experience.

The esteemed Edward Castronova calls it Star Wars: The Dead Republic and says that Skyrim feels more like a real populated world that the massively multiplayer SWTOR.

Dr. Richard Bartle won’t go into a detailed discussion of the game for a couple of reasons, but does write of self-actualization and the opportunity BioWare has if they truly believe that story is the value they bring to the genre.

And then there is Tarnsman who wins the prize for the angriest screed I have yet seen about the game. But for all his anger, he does have some interesting points, especially about the discongruity of the setting.

And those are just a few of the many opinions out there.

Naturally, some of this controversy was predestined.

Anything that involves Star Wars comes with controversy as part of the package.  As well, anything about MMOs and MMO design, especially with a big budget MMO project, is guaranteed to start a war between the various player “tribes.” (PvPers, raiders, solo player, role players, old schoolers, etc.)  Even BioWare itself brings division to the table.  People who like BioWare games seem to REALLY like them, and those who do not tend to not get the whole BioWare mystique.

Add in the undercurrents caused by the threat SWTOR seems to represent (correctly or not) to those who fear it may steal players from their own favorite game or jeopardize the success of a game yet to launch, and we start to see a rich a roiling pot of emotions boiling over in a metaphor which threatens to escape my grasp.

The question is, of course, whether all of this useful.  Does all of this debate and controversy have value?  Does it at least serve as a measure of how far we have come?

Value is, of course, relative.  One person’s junk may be treasure to another.

As I said, I like it.  But I like to read opinions that disagree with my own, if for no other reason than to test how strongly held those opinions are and how they are balanced by emotional versus logic.  And with SWTOR, about which I do not think I hold any strong opinions, it is all the more interesting because I can mentally “try on” the viewpoints presented.  I can feel Gabe’s excitement and understand his desire for a simple brown robe as well as getting the lore-twisting illogical decision to make Sith ships look like early Imperial ships when the Empire is actually a child of the Republic.

So it is all great fun for me.  How about you?

In the end, it came down to my eyes no longer being able to focus on the type in your typical paper back book.

The array of ebook readers out there was not foreign to me.  Both of my parents have an Amazon Kindle.  My daughter has a Nook Color.  A friend of ours has a Kindle Fire.

But being something of a Luddite at times, I clung to books in their physical form.

Until this past summer when middle age struck again, and I ceased to be able to focus on anything within “book range” of my face without a pair of 1.25 diopter reading glasses.  Getting old sucks.

Oddly, I do not have problems with text on the computer screen and am able to read the default teeny-eyestrain-o-vision font used in EVE Online without having to blow it up into human proportions

Glasses are a pain.  I have not built up a lifetime of eyewear management like many of my family and friends.  I have to have multiple pairs of sunglasses just to ensure I can find one pair when I need them.  And even that isn’t always doable.

So an ebook reader, where one can increase the size of the type to read, seemed like an idea whose time had come for me.  But I wanted something backlit, light for reading being a rare commodity in our home, which left the standard Kindle devices off the list.  As for the Nook Color and Kindle Fire, those 7″ screens seemed a bit wee.  I like to get more than a short paragraph read per “page.”

Which left me with a muddle of Android based tablets and the iPad.

But with the holidays and money being tight, I didn’t want to face another $500 on the already potentially scary credit card bill.  So my wife managed to piece together an array of gift cards that were all redeemable at one local Target that also happened to be in a Westfield Shoppingtown mall.  I only had to pay the tax out of cash in my wallet.

So that was my post-Christmas present, a base model iPad 2.

I immediately downloaded the Amazon Kindle app for the iPad.  I have a nearly 15 year relationship with Amazon, so that seemed the best place to start.

A couple of books in, I have to say that the iPad works find as an ebook reader.

I also grabbed the Barnes & Noble app, which lets me download any books my daughter has on her Color Nook.  While all of those Warrior Cats books are not so interesting, I have been reading The Hunger Games trilogy with her.

I haven’t done anything with iBooks yet, though I see that a number of publishers have an option to buy ebooks directly that can be imported into iBooks.

Of course, with this brand new tablet, I could not just read books.  I had to get some apps.

And there are apps out there for everyone. 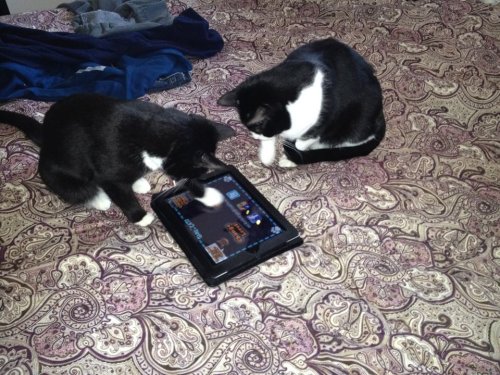 Everyone in the house has played with my iPad

There are lots of apps in the Apple store.  But as with iTunes… and frankly almost all online shopping… browsing is a pain.  If you know exactly what you want, you can get it, but just sifting through the lists of apps… not so much.

I refused to get Angry Birds, since I think we have that on enough devices already.  I did indulge my daughter and let her get Fruit Ninja, a game at which I am comically bad.

And there was, of course, the Games for Cats app pictured above.  A simulated laser pointed works as well as the real thing, though sometimes Trixie starts digging under the iPad when it goes off screen.

I also grabbed a few reference apps, such as the ones for NPR, BBC, PBS, WordPress, and the Internet Movie Database.  I am semi-disappointed in the lot of them, as none seem to improve much (or at all) on just using their web sites with a browser.

There was a nice EVE Online app, EVE Universe, which I grabbed.  It just shows information based on your API Key, but it looks good.

On the science front, among the many astronomy choices, I bought Celestron’s SkyQ app.  I can stand in the family room now, waving a 10″ diagonal window around, showing my daughter the sky we would be able to see if the city lights were not so bright that they blot out pretty much anything dimmer than the moon, Venus, Mars, Jupiter, Sirius, Polaris, and Orion’s Belt.

But so far the most entertaining app I have downloaded has been the iPad version of the board game Ticket to Ride.  I actually own the physical game, but the iPad version is so good that I may never use that again.  It translate the game to the tablet very well, picks up all the minor administrative tasks, and offers solo play against bots, local play via hot swap or wireless connection, and online play against strangers. (Though, par for the course, people still disconnect the moment they are going to lose. I hate that.)  More games like this please, as opposed to the EA games which, if I read the reviews correctly, you pay for and then they pop up ads during play that obscure the game.  Nice.

I also grabbed the Rift Mobile app, which is somewhat limited in functionality, but which does give me palanarite lotto scratcher every hour, up to a maximum of six queued up, that have been helping to feed my planarite needs in the game.

And, finally, I resubscribed to NetFlix stream and have streamed some movies and TV shows to the iPad with very good success.  I have used it ala the Syp method, allowing me to watch a show and play EVE Online.

All in all, I quite like the iPad.  I have to take it away from my daughter now and again, who will sit in her room and stream Futurama if I don’t keep an eye on her.  Mostly it gets used for reading and playing Ticket to Ride.  I have hit something of a wall when it comes to apps though.  Not that I need a lot more.  But every time I use the iTunes app store, I just feel in my bones that there has to be a better way to organize and display apps.