I was somewhat bemused at SOE introducing wings as a flying mount in EverQuest II.

I have such a long history of bemusement with SOE on that front.  I have literally been complaining since the Desert of Flames expansion… the very first expansion… introduced lying carpets as a mount.  I have posts more than five years old on the subject at this point. 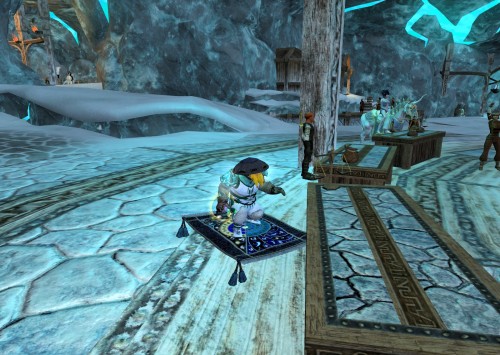 So many things wrong with this picture... 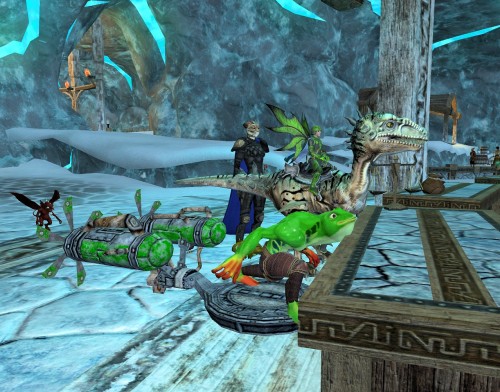 The setup to a "frog in a blender" joke

And while ugly mounts pre-date the Station Cash store, the whole drive of mount mania… mounts with stats, hideously ugly mounts, hovering mounts, flying mounts, leaping mounts, gliding mounts, and now wings as mounts… seems to have been accelerating ever since the store went live.

As Raph Koster pointed out in his recent post on the free to play model, the ongoing process of buying decisions by the free to play players acts as a safety valve to keep the company from doing anything the comes across as too greedy.

The flip side though is that the cash shop, being an essential part of the revenue model, will have a sales quota to meet because people won’t buy your RMT currency if they cannot buy anything cool with it.  You need a plan for every month, every quarter, and every year that lays out your sales goals and how you plan to get there.

It is nice if you can sell consumables, things that boost experience or faction gain.  But if you’ve already drastically softened the leveling curve and handed out dozens of experience boost potions as veteran rewards in you game (I have even more unused potions sitting around now that all my characters are six year vets) that might not be enough.  I am sure SOE sells some of those potions (though they seem a bit pricey for a consumable), but I am far more likely to buy a deed accelerator in LOTRO since deed are still grind-tastic and I do not have a pile of them already.

An expansion is nice to have, though I bet the cash shop only gets partial credit on those sales.

You can always juice things up a bit by having a sale on your RMT currency.  The thought of everything in the store essentially being half off will get some people to buy, but only if there is something they want in the first place.

And on the flip side, you can always put things on the store on sale as well.  We all read that splash screen that comes up with the latest sale items in detail every time we log in, right?  Okay, maybe not.  And most people won’t buy something they didn’t already want even if it goes on deep discount.

All of which has to lead the cash shop planners to focus on what people have bought in the past.  What was a success before?  Just looking around on the Freeport server, I am going to have to say that mounts have sold well in the past.

And if mounts were a success in the past, that is a big incentive to make more.  And while there are no doubt people out there who will buy any new mount just to collect them all… and I speak as somebody whose main in WoW has 87 mounts… a lot more people will buy in if the latest mount is cooler than, or at least different from, anything that has gone before.

And so, as tough as it is for me to admit, wings on your character as a flying mount do seem cooler than just a flying mount.  I am sure that sales will be brisk, and not just with people who name their characters something like “Stabzudead.”

So that will cover some part of sales quota.  But eventually sales will slow and, to repeat that success, SOE will have to top the whole wings thing.  And so the chain of events that lead us to wings goes on, and something new and more outrageous will likely replace it.

And so it is.  Due to its success, we will likely see something in World of Tanks that will top the Type 59.  And, if they sell well, I am sure that LOTRO will offer us more gear with stats.

Raph Koster was certainly correct in the summary at the end of his post in saying, “Free to play is not evil, it’s just different.”

It is just different, and one of the differences is who and what matters when a cash shop is part of the plan.  If goofy stuff sells in your game, be prepared to see a lot more of it.

Meanwhile, I wonder what will come after those wings in the Station Cash store.