In Rift, things are warming up for the latest in-game event, the Carnival of the Ascended, the celebration of the first anniversary of Rift.

Carnival of the Ascended Schedule

That empty corner in Meridian is filling up again.

It has been empty for weeks...

They are apparently setting up just the sort of games you expect from a carnival.

It has never been quite that obvious to me...

And as a warm up to the whole thing, the kick-off is to run out and find dragon pinatas. (And yes, I know in Spanish it is spelled “piñata.”  Trion didn’t feel the need to spell it that way in the English client, and we are talking about their pinatas.)

This has got to be one of those little MMO jokes, since one of the derogatory terms for NPCs in MMOs is “loot pinatas.”  They exist solely to be beat on until they dispense prizes.

Still, I am game to get involved with Trion’s little joke.  So I set out to find some pinatas.  I went to Scarlet Gorge where I immediately spotted one, because they appear on the map with a special little balloon icon. 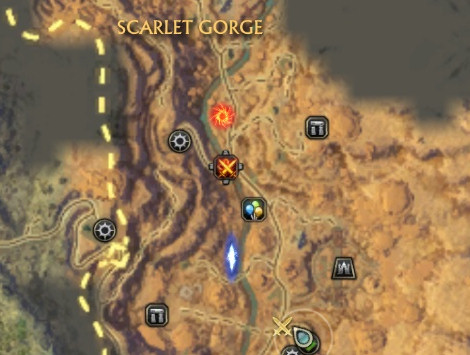 I ran out, found the little guy, and started beating on it. 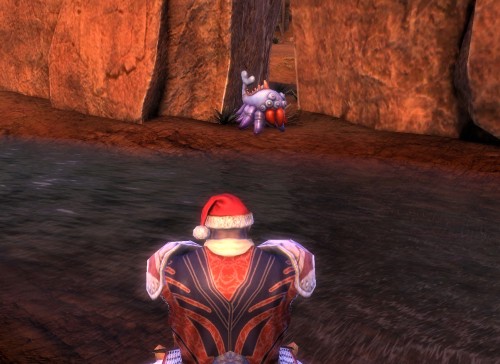 There you are, time to die!

And I beat on it, and cast, and beat on it some more.  But it did not seem to be losing very much health, so I moused over its health bar to see what I was up against. 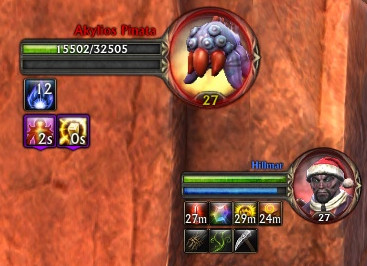 Now, for comparison, Hillmar, a level 27 blueberry cleric, has 1820 hit points and his best spell hits for about 200.  He is a healer, but still.

Fortunately, there is also a debuff on the pinatas.

They wear out naturally

But it takes a while for that debuff to build up, and it doesn’t start until you commence a whackin’ on the thing, so Hillmar had to spend a while beating on various pinatas before they started to actually lose significant hit points.

Still, a little patience and I was able to bring down the pinata.

The basic reward is glass beads, which will be the vendor currency for the Carnival of the Ascended, once it gets going.

But the pinatas also appear to drop cosmetic items from past world events.  Hillmar ended up with several clothing items, three pets, and an effect that can be applied to weapons that makes them glow purple. 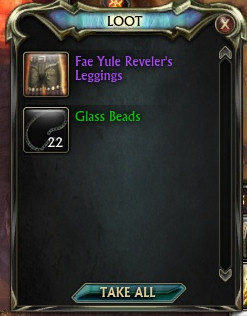 So I have a start on glass beads at least, and at least a few items I like.  I’m not sure I really needed… or wanted… the Fae Yule stuff.  And now I can say I have hunted literal loot pinatas. 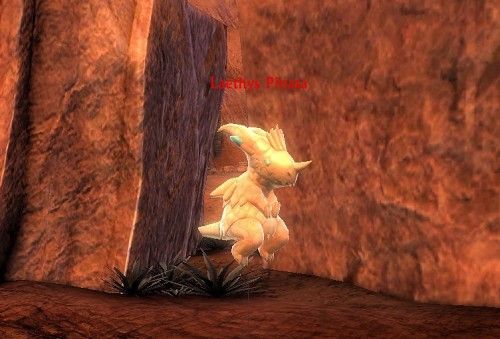 I'm coming for you!

As part of the video production over the last couple weeks, I have been logging into World of Warcraft and poking around.

I started with our original guild, the Twilight Cadre on Eldre’Thalas, which I consider to be our home.

At one point though, I decided to check in on our horde guild.

After finishing up the last instance in Wrath of the Lich King (at the time), in October of 2009 we rolled up on Lightninghoof, an RP-PvP server, and created a guild called Dawn of Anarchy.

That was our attempt to find new experiences by doing as much different as possible.  And it was reasonably successful I suppose.  But there was another hiatus, time spent in Middle-earth, and then Cataclysm.  So our last venture out with the guild on Lightninghoof was back in June 2010, when we were doing Burning Crusade instances. (This is why I blog all this, because I would never remember it.)

The guild has been quiet since then.

But when I went back to check on it this past weekend, I found that my characters were no longer in the guild. None of us were in the guild.

It appears that somebody named Deviuus… and I am not even sure who that is… I think it was an invite based on a friend of a friend sort of thing… petitioned to be made guild master since we had all be absent for so long, then kicked us all out of the guild.

Deviuus by name and nature...

Not that this is a big hairy deal.  I don’t think we were headed back to WoW until the dawn of the Age of Pandas, and even then I doubt that the horde guild on the RP-PvP server would be our destination.  The guild bank was probably full of stuff of dubious value, and we hadn’t advanced the guild or even gotten any guild achievements, since we didn’t play on Lightninghoof when Cataclysm launched.

When it came down to it, I couldn’t even remember the name our guild there until I asked Potshot.  Somehow I hadn’t even mentioned it in a post.  I just knew one was missing.

It is just one of those little lessons in life.  If you are not sure you know somebody well enough to trust them, then you probably can’t.