CCP has come out with their ruling on the actions of The Mittani at the Alliances Panel at the 2012 FanFest in Iceland.

CCP issues a 30 day ban from the game and declared that he had also forfeited his right to sit on CSM 7. 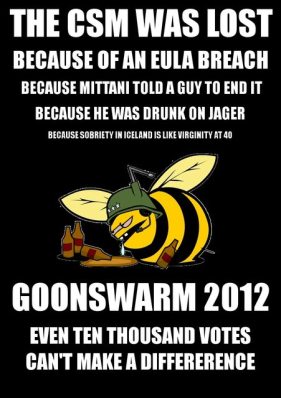 A more detailed look at this and what it means can be found here.

So The Mittani, who had just received an unprecedented 10K votes in the CSM 7 elections, securing him the chairmanship for another term and giving him a clear mandate to continue his policies, has seen all that come to naught due to his actions at the alliance panel. 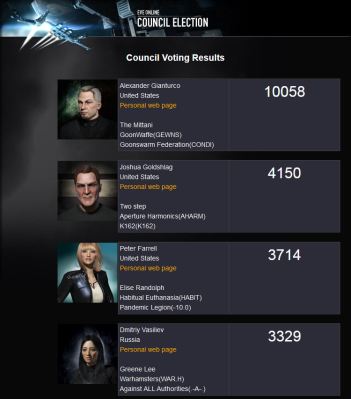 The results announced on March 24

The ban will not affect his position as the leader of the Goonswarm.  The Mittani is famous for running the alliance while rarely ever logging in.

As Jester pointed out, and The Mittani confirmed, one of the The Mittani’s problems has been wearing hats that represent conflicting roles.  Being the leader of Goonswarm, the mastermind behind the most controversial alliance in EVE, is a role that does not mesh well with being the chairman of the CSM, which is a political position that requires being a good citizen.

Relieved of the second responsibility, The Mittani now returns to the role that built his reputation, the leader of Goonswarm.

And his first post-ban declaration is that Tenal must burn.  The State of the Goonion broadcast announcing this can be found here.

The war with Raiden will go from harassing cross-board exchanges to a full scale conflict.

The fury of the Goons will be thus focused.

April 4 Addendum: Seleene has been elected Chairman of CSM7.

29 thoughts on “The Mittani Removed from CSM7, Banned from EVE for 30 Days”