As predicted in a comment thread on another post, Potshot and I found ourselves in EverQuest mid-afternoon on Sunday.  I was on as Wilhelm the warrior while Potshot was dual-boxing with Garfinkel the bard and Foggen the ranger.

We had mucked around a bit and gotten ourselves to level 20 and decided it was high time we found one of these lost dungeons.  Actually, we could have gone earlier I would guess.  We all got a pop-up at level 17 that said we were clear for LDON missions, but 20 really isn’t that much further along with the way levels come in the Blightfire Moors.

I had already heeded the call of the wayfarers and was ready to go.  Potshot had visited Vladnelg Galvern, but still had to speak to somebody at the wayfarer’s camp, so we headed off to the Commonlands tunnel to find Barstre Songweaver.

Potshot got through the questions, got his stones, and then it was time to ask for a mission.  Answering the questions and getting your stone now gets you an achievement.

The achievement seems to be mis-informed though.  The representative in my home town sent me somewhere else to get my Adventurer’s Stone.  But all these achievements are new and LDON is nearly nine years old.

Anyway, we hit up the adventure recruiter and found we had four options.  We could kill a boss, kill a set number of mobs, rescue somebody, or do some fourth thing that sounded like more work and less fun than the rest, but which has since slipped my mind.

We opted for slaying a boss, which is certainly the standard in the post-WoW world, and got assigned our mission.  There was also an option to set the risk level, which had the choices “normal” and “hard.”  We went with normal for our first run. 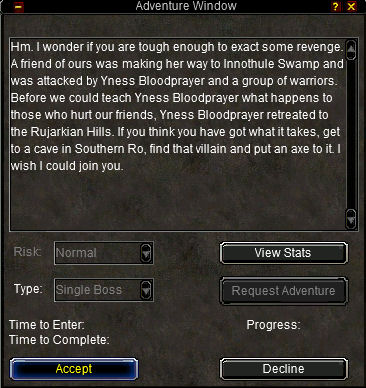 Kill Yness Bloodprayer, and orc in the Rujarkian Hills.  How hard could that be?

We shall see.  Pictures, a map, and potential spoilers after the cut.

I did like the “I wish I could join you” at the end there.  This guy obviously aspires to be a ranger in LOTRO.

So I clicked “accept” and the only thing that changed was a 30 minute timer started counting down next to the “Time to Enter” slot on the window.

It these days of dungeon finders and teleport stones and the like, it took me a moment to realize that he meant us to, you know, walk there.  By ourselves.  With nothing more than the fact that there is a cave in a zone a couple of zones over.

Well, Southern Ro I could find.  The cave though… well, we would see.  So off we went.

Running through the desert

We got to Southern Ro and we hit a bit of luck.  It turned out that the in-game map I had for the zone had a point on the south western end of the zone marked “instance.”  That turned out to be the location of a likely looking cave.

EQ pre-dates the practice of putting shimmering spirals and such on portals to instances and the like.  It is just a dark hole in the side of a cliff.  We ran in and found we were in the right place.  The mission in the adventure window updated.  A new timer started, giving us 90 minutes to finish our task.

90 minutes?  That should be more than enough time!  After all, we were teleported into what I can only call a very small room for a dungeon, with only a door on the far corner and a couple of blue con mobs hanging about.  I figured the boss was probably in the next room and that we’d knock him off and have time for another run or three.

But no, having cleared the room and moved on, we found we were facing a more sizable location. 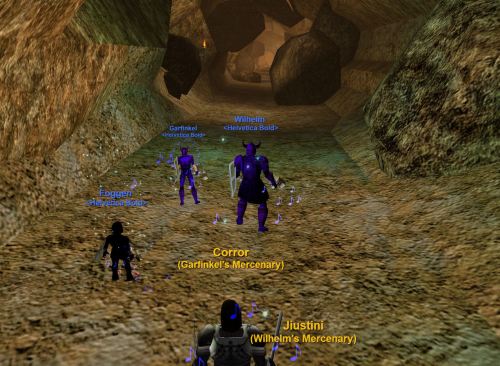 Six expansions in, somebody finally makes a straight cave

There was nothing for it except to start heading down each passage to find the Yness Bloodprayer.  And given that there was a mob or two every few yards, that meant some work.  Still, 90 minutes seemed to give us a fair margin.

Later, after we finished up, I found a map of the zone at Magelo that showed the full extent of the dungeon. 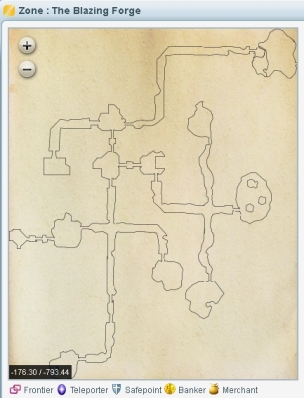 In the picture above, we are standing in the hallway just after the curve at the bottom left of the map.

On we went.  I began to suspect that we might have opted for hard, if only because almost everything we encounter was blue to us, and with a full group of three player (warrior, bard, ranger) and three mercenaries (two healers and a tank), we were tearing through stuff without much issue.

We started off clearing each and every side passage, only being slowed down during fights where a healer was in the mix of bad guys.  One fight we had two healers and became a wait for them to run out of mana as we knocked them down and they healed back up.

Eventually a grew a bit impatient and skipped that whole middle side passage with three forks and drove for what seemed to be the main chamber the top right corner of the map.  It was a big room with a waterfall and a selection of bad guys. 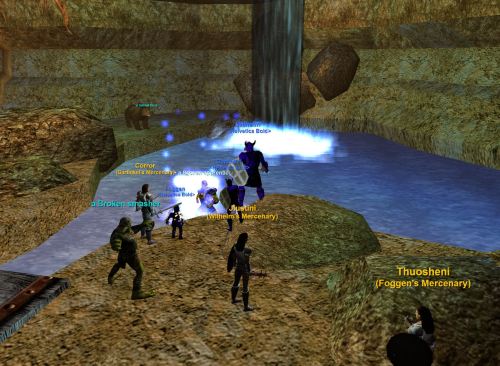 A nice change from cave walls

But, alas, there was no Yness to be found up there.  So it was back to full clear mode as we sought the elusive orc.

Eventually we reached the big room on the east side of the map, south of the waterfall room.  After a bigger than usual fight in the doorway… again with two healers… we looked around and spotted our target.

Yness was actually our level… so was probably a level above us before we entered, since two of us leveled up in the process of clearing the instance.  The six of us fell upon him and slew him without much ado.

And then there was a quick message about our adventure being complete.  We were awarded a point.  And that was that.  We were standing at the end of the instance.  So we took a picture.

It took us a bit more than 75 minutes, with only one short break in the middle, so the 90 minute timer seemed to be an actual indicator of the time you should expect to set aside.

The ending was a bit anti-climactic.  And we were left with the usual “okay, now to walk home” routine, though EQ now gives you the “origin” skill, which is a once per hour recall to your home town.  We used that.  I need to figure out if the recall point can be reset, since dropping into the noob zone in Crescent Reach isn’t exactly where I want to go most days.

I was pleased to find that some of the drops, especially the weapons, were worth a couple of platinum coins each.  My mercenary is up to the point where she costs 4 plat an hour, so I have to earn to stay ahead of that game.  So while I am not going to get rich off of drops, at least it is a step up from getting to the vendor and finding those rat’s whiskers are only selling for 3 copper.

The experience was okay, about a level for each of us.  After Blightfire Moor, that didn’t seem like much, but in the perspective of the history of EverQuest, a level in 75 minutes seems pretty speedy.  We might opt for “hard” next time, in the hope of getting some tougher mobs.

And, of course, there are the points.  We have one each now.  I suspect that there is nothing to buy for one point.  I will have to check the vendor at the wayfarer’s camp to see if there is something for which we should be saving up.

Given how things went, I think that next time we might opt for the “slay x enemies” version of the adventure.  You seem to have to do that in any case.

2 thoughts on “We Find Our First “Lost” Dungeon”