The LEGO Rifter project at LEGO CUUSOO which I mentioned a little over a month ago made it to its first milestone.  It got the 10,000 votes necessary to be considered for conversion into an actual LEGO kit.

Now we just have to wait and find out if and when this will make an appearance at the LEGO Store.

Meanwhile, what of other EVE ships.  I see a LEGO Mymidon being proposed already, and there is the “which other frigates” poll thread in the EVE Online forums.

And will we get a minifigure to go with it?

You’ve done it! You and all of the EVE Online fans voting for this have together achieved 10,000 supporters for the EVE Online Ships – Rifter project. We’re fans of awesome spaceships too, so we’re excited about this one.

You’ve built quite an impressive LEGO Rifter. It captures the essence of the ship with LEGO bricks, and it will serve as a good starting point as we explore the possibility of transforming this into a LEGO product.

Congratulations on achieving 10,000 supporters. We now officially advance this project to the Review phase.

So the LEGO master builders will try to come up with a sellable version of the Rifter.  I hope they use more rust colored bricks.

Last week’s patch to Rift had all sorts of things in it.  The patch notes go on for ages.

But the key item for me in this update is the new trade skill.  Fishing!

Yes, I have some odd ideas about fishing.  It is inexplicable to some, but whenever an MMO I play offers up a fishing experience, I must indulge in that experience.

I am not a complete nutter on the subject.  For example, I have a lot of the fishing achievements in WoW.  I fished up all those coins from the fountain in Dalaran.  But I haven’t bothered with some of the others, and I have never won a fishing tournament in-game.

But I do like that fishing is in games.  It is something of a change from the constant running around to kill, deliver, harvest, or just get place.  Instead, you pick a spot, get out your fishing gear, cast your line in the water, and wait to see what comes along.

So, once the patch was installed, I went fishing.

And I have to say that I like how they have implemented fishing.

Right off the bat, it does not take up a trade skill spot.  Like cooking, fishing, and first aid in WoW, you can have your main trade skills along with it.  But it is more of a hobby, the way that LOTRO implemented things.

Trion added in another skill with the patch called Survival.  Survival seems primarily focused on giving you something to do with the fish you catch.  It is basically cooking… seafood… along with the ability to make some camping gear.  When the female survival trainer said, “Do you need help pitching a tent?” I thought perhaps I mis-heard… or that it was some sort of reference to the Diablo III demon hunter… everybody seems to be mentioning that.

But then I found that I could, with sufficient skill, make a tent and pitch it.  If I have read right, making the tent, or bedroll, or whichever, gives you the rested bonus you usually only get in Meridian if you log out on it.  Or something.

But Survival is mostly about cooking fish.

The fish menu so far

All of which is a long way of saying that you can do something with the fish you catch, which is saying something since there was not a cooking skill in the game before this patch.  Back to fishing.

The mechanics of fishing are simple.  You get a beginners fishing pole from the fishing trainer when you start off. 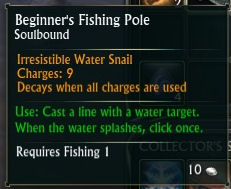 You do not have to equip the fishing pole, it simply has to be in your inventory.   You then drag it to a hot key… and fishing is always mapped to 1 on my hot bar… auto-attack or starting attack is 2, fishing is 1… and you are about set.  You can add a lure to your pole.  Fishing has abilities you can unlock as you skill up, which mostly involves making lures and upgrading your fishing pole.

Once you hit the fishing icon on your hotbar, you get a targeting reticule, which you place out over the water where you want to fish. 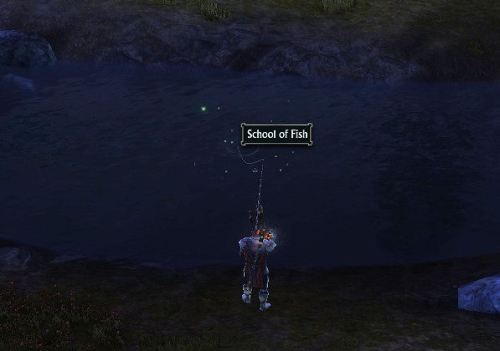 This comes in handy as there are schools of fish you may want to hit.  It does seem a little unrealistic though.  People spend years practicing casting to be able to hit a spot with the accuracy you get with your very first cast.  Still, a simulation is always a set of compromises.

When your line is in the water for GOD’S SAKE DON’T MOVE YOUR CURSOR.

Seriously, when you cast, leave the cursor right where it is.  When you hook a fish the cursor will turn to a fish icon and you will get a message in chat instructing you to reel the fish in.  You do this by clicking on your line, which your cursor is sitting on… unless you moved it.  You didn’t move it, did you?

So you do not have to mouse around a lot to reel the fish in.  It is especially convenient if you have a tackball, as I do, and you can lay the cursor in the water and just fish with the 1 key and the mouse button.  This, by the way, is going to make creating a fishing bot for Rift extremely easy.  I do test automation professionally, so this is always something that always springs to mind.

You may have to reel in the fish two or three times.  There is no timer bar, as with WoW.  You just wait for a strike while your character fiddles with the reel, making the bait dance under water.

So the fishing mechanic works for me, and seemed to compromise in the right places.  But what do you catch?

The next thing I like about the new fishing in Rift is that you can fish up a wide variety of things.  There are, of course, regular fish.  You cook with those, or make lures out of them.

Then there are special fish which you can turn into an NPC in the zone in which you caught it (in groups of 8) for a boost in faction or a box of goodies. (Which has been more lures when I have done it.)

You will also get some gray vendor trash.  Fishing up trash is part of the grand tradition of MMO fishing.  The trash seems reasonable… fish scales and the like.

And then there are special items.  I have fished up items for collections… artifacts I guess they are called… which is good, because I need help there.  The next collection I complete will be the first not counting the tutorial collection.  I also fished up a box with 40 gold coins in it, which again was good, as I seem to be unable to make much headway in accumulating money.  I seem to perpetually have 8 plat.

The fishing skill, which goes up as you fish, determines where you can fish.  This is somewhat like the way it used to work in WoW, where there was a minimum skill level to fish in a given body of water a well as a point where fishing in that body of water would no longer grant skill increases.

I cannot fish here yet

There are also two types of water, deep and shallow, and each yield up different varieties of fish.

I can totally fish here

And you will want to fish in both depths in order to get the achievements.

And there are plenty of achievements.

Rift is the one game that I have played that comes close to WoW in effective presentation of achievements.  I cannot tell you what magic Blizzard has, just that their achievements seem… happy… shiny… just goofy enough… and easy to read in the achievements panel.  And Rift is pretty close on that front.

And there we have fishing in Rift.

I will go max it out and get many of the achievements with one character, which is what I usually do with fishing.

And some day I will get around to writing the giant MMO fishing comparison post to determine who has the best MMO fishing mechanics around.

Addendum: Karen at Massively also has a look at fishing in Rift posted today.  I knew I should have posted this yesterday.