Yesterday I decided to pull a game out of the unplayed pile… the virtual unplayed pile, since Steam is the prime holder of unplayed games for me thanks to their Summer sale.  Why did I buy all those games?

Anyway, I picked one that has not only been talked to death, but has had a sequel that has also been just about talked out.  So now at least I am not as far behind the curve as before. 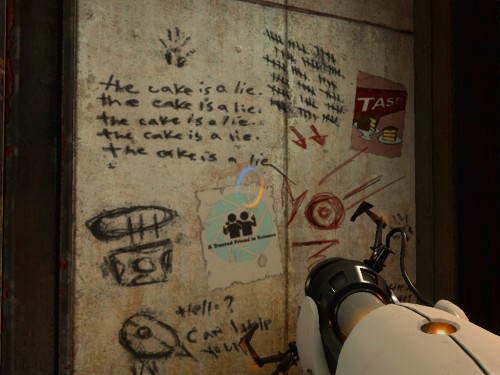 Oh, I see where this line came from now

You see, I hadn’t actually played Portal up until yesterday.  Valve was giving it away for free on Steam a while back, so I grabbed it.  But it has just sat on my hard drive ever since.

In an odd twist, the reason I started the game was because my daughter brought it up while we were driving around yesterday.  Somebody in her class has been playing it recently and talking about it, so she started asking me about it.  So I broke it out and we played through some of it together.

One of the amusing asides is that, despite not playing Portal before, I was already familiar with the GLaDOS AI personality as she also appears in some of the DLC levels for Defense Grid: The Awakening. (Still my favorite tower defense game.)

The game itself is good simple fun.  My daughter found GLaDOS a bit creepy, especially when it was announced that once testing was over, we would be “minced.”

We played through until it was time for her to get ready for bed.  And then I stopped when I reached a level that required more manual dexterity than I was able to muster at the end of the day.  But we got fairly far into the game.  I think we will be able to finish it up, especially since when you die, you just go back to your last save point.

Though we had better finish it up tonight.  Tomorrow I will be playing something else.

And since I am now part of the “club,” I feel fully justified throwing in my two cents worth of repetition.

I am only about five years behind.

6 thoughts on “Seeking The Origin of Cake Myths”