Rift?  Why yes, we still do more in Rift that just fish.

It has been a while since I posted something about the instance group actually living up to its name and running an instance.  Last time we had been sent packing from King’s Breach because, frankly, we just were not high enough level.  The yard trash was causing wipes.

So we spent a couple of Saturday’s running quests and chasing rifts out in the Droughtlands, home of the famed caves of Lantern Hook.

Let us ride to Lantern Hook!

And this work payed off in levels.  Finally we were all assembled together on a Saturday night and ready to face King’s Breach again.  The party was:

And we were going in… right after the cut… the usual crap ton of holiday snaps and such.

This space occupied merely to push the actual text I hope you will read down into your field of vision.

We assembled in Meridian and, having decided that riding out there on our own a couple of times allowed us to take a short cut, we decided to use the Looking For Group tool to whisk us away to King’s Breach.

And, of course, the tool wouldn’t let us go in because SOMEBODY had an UNSPENT soul point.  You know, this talent tree stuff is all Blizzard’s fault, having put it in Diablo.  And even they are ditching it.

Anyway, eventually we were teleported to the dungeon and faced again that which had previously smote us.

Here we are again…

We started off slow, taking on the bad guys we had been previously able to manage.  As that seemed to go well, we next picked on the big baddies who were wandering the field and who had pretty much one-shotted us the last tie around.

That went well enough that we started moving out of the cover of the instance start and into the actual field, taking on more of the mobs who had previously seen us off.

Actually moving into the instance

We were able to move fairly quickly around the open first section of the instance, clearing as we went.  Upon taking out the last group, the first boss, Hunter Suleng spawned center stage.  So we went after him.  While he summoned help during the fight, it was all over pretty quickly. 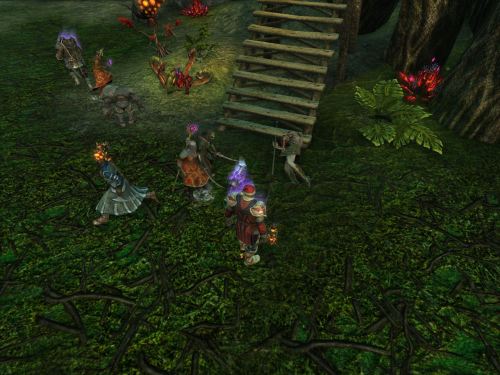 As seems to be usual in Rift instances, the next segment was gated and opened up to us upon defeating the first boss.

It was in the second section that we ran into a problem.

We were able to clean up the patrols and other guardians as we went.  But there, off to the side, was a foothold.  Taking the “everything must die” viewpoint, we jumped right in and attacked.  I mean, footholds?  Piece of cake.

Which lead to our first wipe of the night.

Yeah, sure, the guardians of the foothold, marching in their usual circle about it, went down like clowns.  But the foothold itself was shooting things at us.  And as we attacked it, it summoned helpers, along with one of the nearby patrols we had neglected to kill.

So the wheels came off pretty quickly at that point as we all tried to react to the situation.  Wipe.

I used my soul walk to move away to ress people, but I did not walk far enough away.  When I came back, I was still within range of the foothold and it began shooting at me as well as bringing down that patrol.  I was dead again.

So Earl, who is our alternate resser… odd job for a tank, but you work with what you have… soul walked, being sure to move further away, and got us all back on our feet. 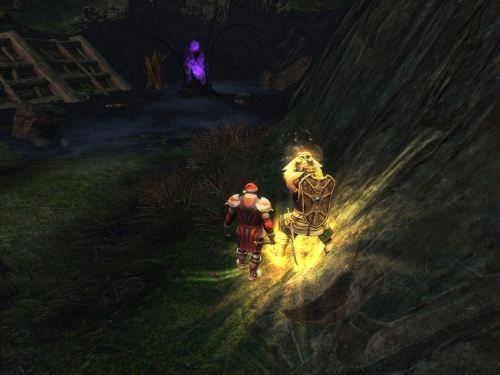 Once all back and buffed, we took out the patrol and then carefully went back, aware of the adds and managed to take the whole thing down.  Go us.

From there we moved on the the next boss, Ravalos, a big lizard-ish fellow with some friends.  Aside from the fact that the casters quickly found out that standing behind him was bad idea… good thing for group heals… he was another fairly straightforward fight. 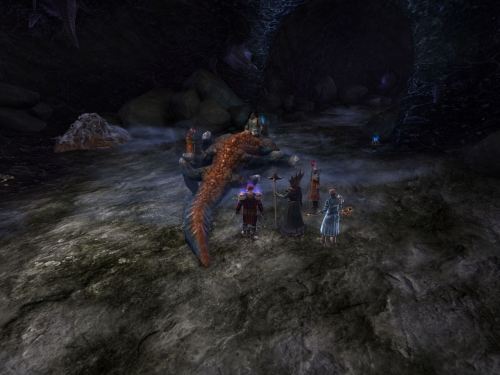 Ravalos ready to be skinned

He was the guardian of the route to the third and final segment of the instance.

The third segment had the usual yard trash.  It also had another foothold.  This one behaved in the exact same way the other one did.  But we apparently learned nothing from that encounter and wipe in pretty much the same way we did before. 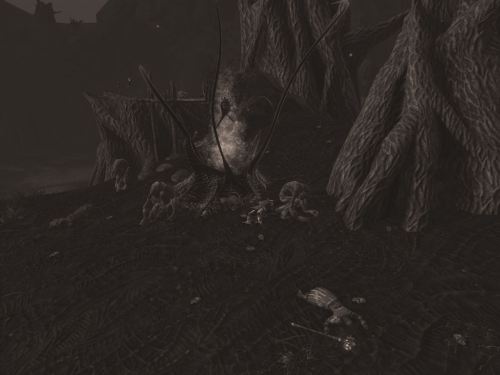 Foothold and yard trash cleared, we had a pair of death beacons sitting around which, as expected, spawned the next boss combo.  This duo, Flesheater Autoch and Soulflayer Mondrach came as a one-two punch that was primarily worth noting due to the comedic factor.  We took down the first guy… and honestly, I don’t recall who came first and the whole thing went down so quickly that I didn’t even get a screen shot… and as we sat there congratulating ourselves on a job well done, the second guy loomed up right behind Earl leading to a “I don’t think we’re done yet…” comment on Skype.

The pair of them dispatched, there was just the final boss, the Shadehorror Phantasm, who spawned behind us as well, but at a safe distance. 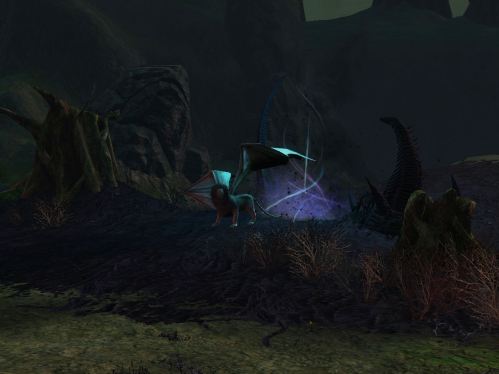 He appeared to be a winged manitocre and managed to put up something of a stubborn fight, at least compared to his boss-like predecessors in the instance.  He seemed keen on killing everybody at once with AOE and some summoned creatures.  This actually led to some tension in the fight, as I ended up having to belt out a lot of mana-hogging group heals as the fight went on.  Jolly was struck down late in the battle, which slowed down the final result some.  I was mostly out of mana for heals at the end.  But mostly out of mana is not the same as out of mana.  I kept everybody else alive and we sent the Shadehorror to where ever it is that such things go when they are defeated.  A database table somewhere, I imagine.

And with that victory, came the sign that we were done.

We lined up for our usual end-of-instance picture with the remains of the final boss.

Victory in the Breach

And then headed back the the entrance to turn in the quests we had picked up weeks ago, but had only just completed, slaying the few monsters we had missed on the way in, just for the sake of completeness.

Over all, with the group at level 35, the instance seemed to go fairly easily, footholds aside.  It is interesting just how narrow the bands of difficulty are in Rift, at least for us.  At level 31/32, we were getting stomped.  At level 35, which happened to be the same level that most of the mobs in the zone are, things were very much under control.

We are now 6 dungeons in to the 11 standard dungeon in Rift.  The next one is Runic Descent, which is listed in the LFG tool as being suitable for levels 38-47.

Given our experience with King’s Breach, I think we should wait until we hit level 38 as a group in order to be high enough level to avoid getting slaughtered by the yard trash, yet not so high enough in level to make the whole thing seem too easy.

Which means we will probably have to spend another weekend or two chasing rifts or running quests.  While most of us got a level during this run, that still puts us at 36, two shy of the goal.

2 thoughts on “Clearing Out King’s Breach”