With the announcement of the upcoming Rift expansion, Storm Legion, I thought it might be time to get a character to level cap in the game so that should I buy it and want to play, I would be ready… unlike with all those LOTRO expansions I own.  I’ve only ever been to Moria.  But that is a subject for another post.

Fortunately this was a pretty easy task to accomplish.  I have had a rogue sitting at level 49.8 for a few months.  I never could quite build up the enthusiasm to push him that last 20% of a level to get to 50.  I have hit level cap in enough games for there mere act of getting there not to be much of a thrill, and end-game pursuits have never really been my cup of tea.

But, with an expansion coming, the balance was tipped.  I figured it would be my only chance to see what one can do at level 50, since once you tack on another 10 levels, all that previously end-game content gets bypassed.  Such content becomes Wintergrasp after Cataclysm; once a popular event, now a distraction pursued by a few die hards and the curious.

So I ran out to Stillmore, the last zone I had been working on with my rogue Teresten (I “still” had “more” to do… who names these zones?), to find a zone event just kicking off.  That was a good thing, since it saved me the trouble of trying to pick up where I had left off.  I joined the first public group I could find, which became the main raid group, and we ran around stomping out rifts and slaying bad guys.

Along the way, the moment came, and I hit level 50.

Now if you don’t play Rift, that “Level Up” message might look pretty impressive.  To put that in perspective, I get a similar size message, only in green, when I grab a quest which says, “Quest Accepted.”  So I have seen the big text 48 times already, it is the achievement at the bottom that is the difference… in that is says 50, rather that 40, 30, 20, or 10.

Rift is big on celebrating every moment, which is a good thing.  I remember in LOTRO when it used to just say something like “your level has changed” in you chat window.

I went on with the event, which was a success.  Since Stillmore events are for level 50s, it draws a crowd from the top heavy player base.  I got a pile of things that added 10,000 points to my planar attunement, which I noticed advanced my still visible and working experience bar when I used them.

I also had an in-game mail waiting for me.  “Probably some congratulations message from the faction leader,” I thought.  It was, sort of, though it was a little garbled at the end.

Since this might spoil things for you if you have not made it to level 50 in Rift, I am going to put this all after a cut, so you’ll only have yourself to blame if I ruin the surprise.

Unless you are reading via RSS, in which case you can see the whole thing.  Sorry about that.

I wasn’t sure what (default) I was supposed to press, and was amused to see that their profanity filter was editing their own in-game message.  Are the QA folks not testing with the filter on to ensure it doesn’t render such messages unreadable?

I opened up the key bindings to find what opened up the Chronicles interface by default and saw the ceremony listed.  So I immediately clicked on it and was transported to a party.  A party for me.

In a bit of stepping things up relative to hitting level cap, you get to go to an instanced version of Meridian (if you are Defiant) all decked out to celebrate your making it to level 50.

I followed the red carpet into one of the main chambers, where NPCs said nice things about me.

I was told what a special and unique snowflake I was, all without another player around to deny it.  Though I noticed that they couldn’t even be bothered to use a wildcard to put my character name into the speech.  Just another ascended on the assembly line.

And then they had me step in one of those Defiant machines and switched it on for another achievement. 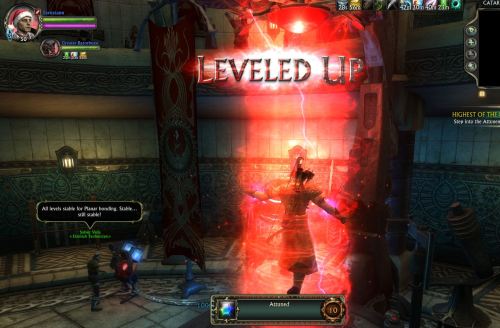 So there I was, “attuned” according to the achievement.  What new wonder or power did this open up for me?  What great new end-game club was I going to be able to join?  What did this ceremony grant me? 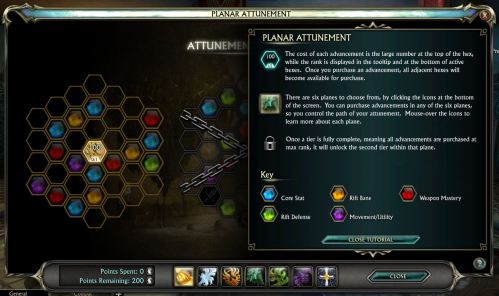 I might have mentioned the esteem in which I hold such trees in the past.  Though, to be fair, most of the skills on this one seemed less than useful at first glance.

Whee, I can deliberately lure earth rifts now, rather than just getting whatever random rift.  And with enough points, I can damage earth rift creatures more effectively.  So I guess that goes hand in hand.

I only figured out later… by you know, actually reading… that I could change which type of rift forces I wanted to spend against.

But at the moment I could see a +1 endurance skill now and again, which was okay I guess.  But for a rogue, a dagger class to the point of being a cliche, that is specialized in ranged attacks, getting boosts for sword and maces, all that showed up on the earth tree, seemed less than useful.

And while I was dwelling on this, the whole party turned into an event, complete with invading bad guys.  The first waves were not so bad, and I managed to get up into the main common area in Meridian and strike down the named guy, only to have him laugh at me and summon a boss. 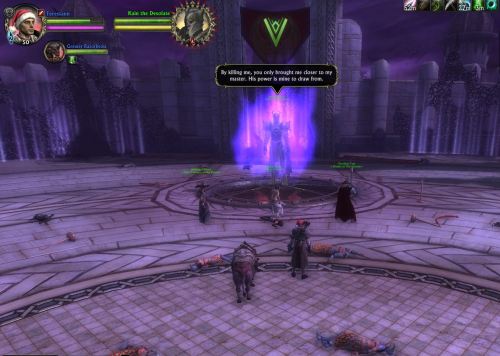 Who is crapping on my party?

This was all made more painful by the fact that I had done this straight after the event in Stillmore, so my bags were full and I was out of healing potions and dinks.  So I died a couple of times trying to get the hang of the fight.  Eventually though I was able to kite the boss down and was given my third achievement for the level 50 process.

Indeed, for without me, that virtual instance of a virtual city might have been held hostage to that virtual bad guy indefinitely!

And with that, the party resumed and cake was served to celebrate the great victory.

Now the question is, what should I do after hitting level 50?  Is the planar attunement tree important enough that I should try to flesh it out a bit?  Should I work on improving my faction with various groups in Telara?  Is Ember Isle worth the effort?

Or will all of this, in the grand MMO tradition, be made obsolete by the upcoming expansion?

I suppose I could just go work on achievements.  Those never go out of style.

10 thoughts on “Fifty – Not Just Another Level in Telara”