One of the mysteries of EVE:  How can a fleet op that takes us on a grand tour of high, low, and null sec, which included six supercarrier kills, take less time than a convoy op from Delve to Deklein, which is essentially 15 gates and five jump bridges?

I have to guess that it is just a matter of motivation.  If our FC, Sour Blossom, had told us that there was a potential capital ship kill waiting for us in VFK, we would have been on the ball.  As it was though, she had to lead and keep together the fleet of epic bad connections and little lost sheep. 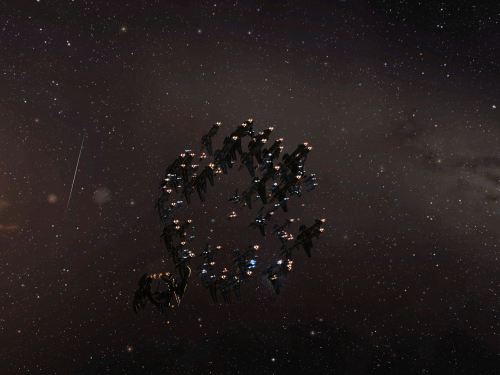 Arriving at another gate

To her everlasting credit we did not lose or leave behind everybody.  If it had been me, an hour into the op and something like 8 gates in, I would have been screaming.  I am pretty sure DBRB would have been leaving people behind.   So I admire her fortitude in the face of such things as finding out that one of the people dropping was running six simultaneous EVE clients, streaming the Alliance Tournament, talking on Mumble, and probably clicking on all the porn links in chat.  Or something like that.  I might be exaggerating a little… but only a little.

I put the game in window mode, put Mumble on the speakers, and played Peggle Nights while waiting for the jump command at each gate.

It wasn’t that bad, really.  Nothing like the multi-hour scale of the supercap convoy to Delve, of which Endie wrote, which appeared at first glance to be a plot to punish Pandemic Legion, who were guiding the whole op, for some past sins. 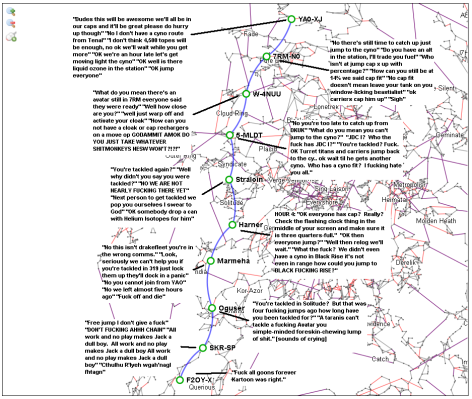 The Trail of Tears

Originally I said I was going to leave some equipment and a jump clone in Delve, just in case.  But on Saturday there were lots of convoy ops heading back home and I decided to clean up some of the junk I left down in Delve and bring back at least one fleet fit ship, a Drake, and whatever I could fit in the cargo hold.  I ended up with a ton of crap primarily because, unable to find contracts for correct, doctrine fit ships, I had to buy non-standard fits and then refit them with the correct modules, which lead to some excess.

Plus, in some quiet moments while waiting for fleets, I killed a few rats and, in my usual manner, looted and stashed away every single drop.

Add in the piles of ammo I bought in anticipation of a long war and I had stuff to sell.

Of course, my selling this sounds more pre-meditated than it actually was.  I saw the announcement for the convoy fleet op go up and had to scramble to get myself in position in my Drake just as it was leaving.  I only realized when already outside of the station and warping to the fleet that I should probably sell some of that crap.  This is the point where many minutes between gates came to my help, as I was able to remotely list almost everything I had in 1Dh-SX on the market.  Training up all those trade related skills paid off, as I can list items from anywhere in the same region.

And while the prices I set were somewhat at the bargain basement end of the spectrum, at least I was able to get some ISK out the stuff, which is preferable to having crap sitting around forever in a station you may never visit again.  I have a lot of stuff in that situation in New Eden.  The case against region-wide buy orders.

While our convoy arrived unmolested in VFK, SoCo was organizing some going-away surprises.  They whelped a Rokh fleet in order to kill two dreadnoughts that were part of a capital ship convoy, along with a few Drakes that came out to support them.  I guess that SoCo will spin that as a moral victory of some sort, as they seemed to lose on both the total kills and ISK front by a wide margin.

Meanwhile, it looks like all will not be boredom and ratting back in Deklein.  Nulli Secunda is not just still alive, but has joined up with Black Legion in Venal.

Gentlegoons, we may have announced that we’re done with the war in the South, but the war is not done with us. Nulli has moved north and is actively working with Black Legion to siege our techs; last night we, soft after weeks of smacking around incompetent -A- fleets, welped a drake fleet and lost a Convicted tech in late US tz. The South and their laughingstock fleets has made us weak, fat and soft – which is unacceptable.

You need to be out of F20Y and back to VFK ASAP. Cap Convoys are going out regularly, as are subcaps; pay attention to broadcasts and get out of the shantytown, it’s time to fight some real opponents.

The original goon broadcast was by the_mittani to all-all

There is a post up on EVE News 24 about the battle and the Nulli/Black Legion alliance.  I was actually planning to be in that fleet, though it came up at midnight local time for me and I ended up falling asleep before it happened.  Probably a good thing too, as the results of the actions at 42XJ-N could not be spun as a victory for the CFC in any way.