As I mentioned previously, the last big thing CCP dropped into EVE Online was an update to dedicated mining ships. The stated intent was to change the roles which the ships occupied in the game.

Each group of ships, tech 1 mining barges and tech 2 exhumers, would be divided into three new roles based on aspects of the mining process.  The new roles were actually priorities, the theory being you could choose which mattered most to you.  Those priorities are:

Pick your focus. If you are worried about being ganked, go with high defense.  If you want to burn the most rocks, choose yield.  And I guess if you want to mine without the logistical tail of a hauler, choose storage capacity.

My prediction was that players would stick with the Hulk.  Even though it lost some defensive capabilities… ganking Hulks got easier with this change… it remains the premier exhumer for mining the maximum amount of ore (or ice) in the minimum amount of time.

And past experience… go look at Hulkageddon kill mails… shows that people will fit.., when they put any thought into fitting at all… to maximize yield first and storage second, while defense remains a distant and rarely considered third.

I know what I was mining regularly, that was my priority set.  And it was reinforced by the fact that I never lost a mining ship.  Well, except for one that was in the cargo hold of another ship back in my more naive days.

I haven’t been back to mining in any serious way in a couple of years, and I do not expect I will return any time soon.

Still, the idea of the Mackinaw harvesting away while I worked on something else… like writing blog posts… has an appeal.  My second account is off in high security space involved with an industrial concern that is building tech II modules.  But that only takes up a bit of his time, so I have been doing some building and sales on my own.  And if he could, for example, save a bit of ISK by idly mining some rocks while I was otherwise occupied, it might be worthwhile.

So I decided to build up a mining ship for that purpose, limited only to parts I had on hand.

Fortunately, being a pack rat, I have a lot of parts on hand.  That included a Mackinaw hull left over from a brief dalliance with ice mining a few years back.  And so I assembled my ship. 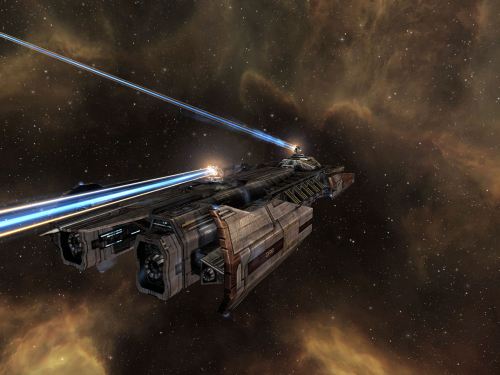 I like the ORE logo on the back fender of the ship.  I must have opted for the gold trim upgrade.

I ended up fitting:

Thanks to the skills on my alts, which are at 5 all around for mining and defense, this gave me a Mackinaw that has about 25K effective hit points (EHP), could hold 35K m3 of ore, and which could pull down 1140 m3 of ore a minute, if I kept the mining lasers targeted.

The yield from a 3 minute mining cycle

That means I fill up the ore hold in about 30 minutes, at which point I fly back to the station, empty the hold, fly back to my bookmark… or another belt bookmark… and start again.  A full hold of just plain veldspar gets me about a million units of tritanium (333 veldspar refine to 1000 tritanium, and my guy has the skills and standings to get 100% refining yield), which I could turn into 6 million ISK pretty easily just servicing buy orders at the trade hub a few jumps away.

Given turn around time in station and occasional foibles in keeping lasers pointed at rocks full or ore, this is maybe a 10 million ISK an hour occupation in the given market.

There certainly are more lucrative occupations.  I could easily make 4-5 times as much running the right null sec anomalies based on bounties alone.  And Jester has a list of other activities I would be stupid to ignore if making ISK were my primary goal.

Hell, I could just mine better rocks and make more ISK.  I chose veldspar because I happened to have the tech II crystals on hand and because in the systems where I mine, nobody touches the veldspar.  I can come in many hours after downtime and find a rich bounty that requires little in the way of laser management. 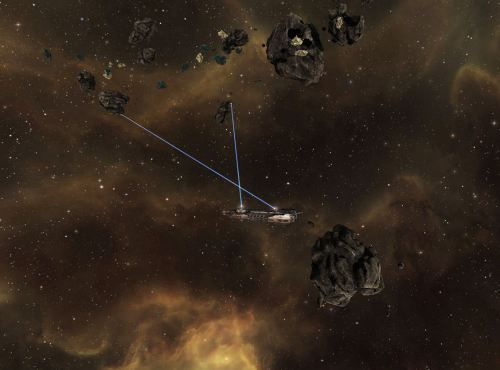 The rocks nobody wants

But for an activity that requires little effort, it isn’t bad.  And I can do it in a ship which, while hardly gank proof, is much better protected than your average Hulkageddon victim. (I do keep myself aligned to warp out and my window arrangement keeps the overview in my field of vision to avoid surprises.)

This is just the sort of thing that has upset some people.  Not that somebody expressing outrage over any change CCP makes is a new thing, but the linked article felt to me like it was straying dangerously close to what I would call “ganker entitlement,” a theme I suspect will continue in parts II and III.

But you still have to ask, “Is this too much?”  Is my slightly safer semi-afk exhumer a good thing or a bad thing?  Is the change going to kill off ganking and eventually flood the market with cheap minerals leading to a price crash?  Or will things remain business as usual?

Looking at the Eternal Hulkageddon kill board, which stands at 18,783 kills right now (10,454 Champion, 8,329 Junior), it seems like ganking is carrying on in its merry way.  The recent kills on the front page are all very recent indeed.  So somebody out there is carrying on as though it were business as usual.

But that might be because players continue to choose the Hulk and yield above all else, in which case ganking got easier not harder.

10 thoughts on “The Fate of the Mighty Mackinaw”