I seem to be missing most of the Tribute War.

Which is annoying, since the whole thing is happening practically in our front yard. The big battles in UMI-KK are only about a dozen jumps from the systems I consider “home” in null sec. 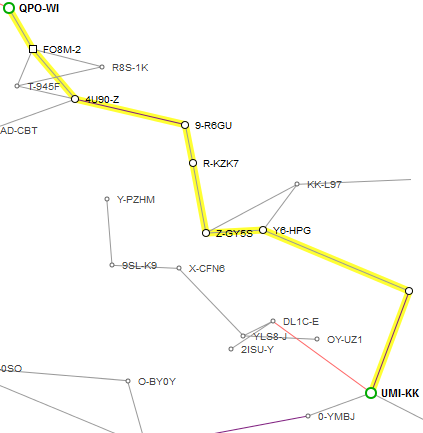 QPO is practically in our alliance’s front yard.

In fact, there was a flurry of corp and alliance wide messages this past weekend because because hostile forces made their way into one of the TNT held systems and put a cyno jammer into reinforce. There was a call to arms with a request for a full alliance ‘stand to’ in order to meet this threat.

And it took place on Monday at 17:00 EVE time, which is about the time I am sitting in my cube at the office thinking about what’s for lunch.

So while The Mittani dot Com has run a number of stories about the war, my own exposure has been limited.

I did get in a fleet last week that blew something up, and there was the titan loss in QPO.  But for the most part, a combination of life and Euro Time Zone battles has kept me out of the action.

Last night though, the stars seemed to align.  There was going to be a big timer related battle at UMI-KK, the system focus of much of the efforts over the last week.  And it was going to be in prime western US time.  Would I get in a fight?

I had to put a cut in the hide the fact that there was only a boring wall of text to follow.

The TL;DR summary is, “No, nothing happened. Nothing exciting anyway.”

Look at the pictures and carry on.

The detailed version of nothing… well, here it is.

I got myself on early, picking a scimitar as my ship for the night.  The CFC is in some flux when it comes to fleet doctrines.  Goonswarm has announced changes to ship fits, and expects people to show up for ops in those fits, but not all the alliances have caught up.  My own alliance, TNT, was denying reimbursements up until today to people flying the update configurations.  But the Scimitar fits had not changed, and everybody wants more Scimitars in their fleet.

I then joined up with the Tengu fleet under Vily, which was a bit of a change.  I have only just acquired the skills to fly a Tengu in fleet ops… you have to be trained up to level V pretty much across the board on related skills… and have not even purchased a ship for the fleet.  But an afterburner fit Scimitar is part of the Tengu doctrine 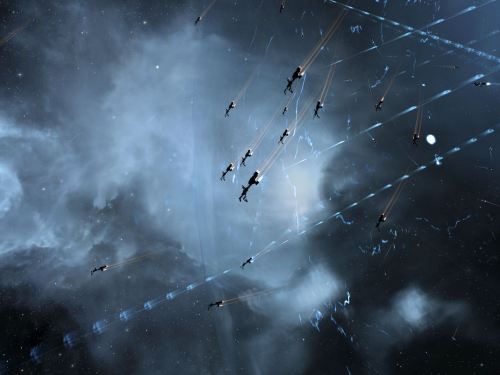 Then it was the usual wait on the titan, the sudden call to bridge out, and there we were in UMI-KK.

And then not much happened while I was on.

We first camped one gate and then another, waiting for hostiles to show up. 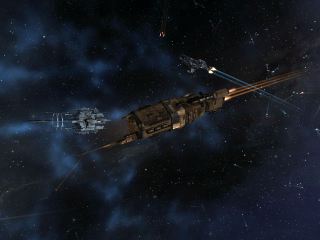 The Typhoon helping camp a gate

That Typhoon was in out fleet, but does not represent official Tengu fleet doctrine.  It is more part of an unofficial Goon policy of having one ridiculously inappropriate ship in every fleet.  I ended up repping that big fat target a couple of times.

Vily relayed reports of a pile of hostiles sitting on a titan waiting to bridge in at one point, and an enemy staging system was reported to have a lot of characters in local.  DBRB’s Drake fleet had a bad run-in with some reds a couple of systems over.  But for us it was just the occasional unwary traveler who got popped.

The Scimitar anchor lost connection during the camp and a couple of AFK Scimitars sailed off into space, never to be seen again as far as I know.  The rest of us formed up on the backup anchor and flew around the gate.

Eventually it was show time and we headed off to the enemy POS with the cyno jammer that we needed to shoot up.  The fleet shot that up and all the guns as well.  Missiles, missiles, missiles. 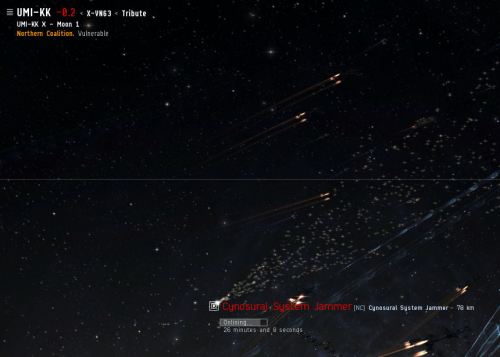 The POS had a couple of people running the defenses, so was dangerous in theory.  In practice we had a lot of Scimitars.  So many Scimitars that one joke on the logi channel revolved around how many Tengus did Scimitar Fleet doctrine really require.

So people needed reps every so often, but with so many Scimitars, nobody was really in danger.  The POS seemed to be well armed with jammers.  While I was never hit with a gun during the shoot, I was jammed a couple of times.  That was like telling me to relax and concentrate on more important tasks.

There was my big accomplishment of the night.

Once the POS defenses were all shot into an offline state, we went back to a gate and practiced flying in a straight line for a while.  We aligned to a planet and flew towards it, afterburners off.

I got some serious Peggle Nights done during that.

Vily explained the origin of his name while we waited.  It seemed he liked a girl named Lily, and named an alt after her.  However, Lily was taken, so he went with Vily.  Later Vily became his main and everybody forgot the name of his old name character… which was Rabbit Angstrom or Richie Rich or something like that.  I have forgotten it already myself.   Another bit of EVE history retold in a half-assed way here at TAGN.  You’re welcome.

Then we jumped to another location and basically flew around for an hour or so waiting for the next timer on the night’s list.  I went AFK and talked to my wife for about 45 minutes of that, only to come back and find myself still anchored up on the Scimitar leader and flying around.  I expected to be yet another pilot headed out into deep space.

Some hostile bombers showed up just before I got back.  There were all of three calls for shields in the fleet history.  I was not missed. 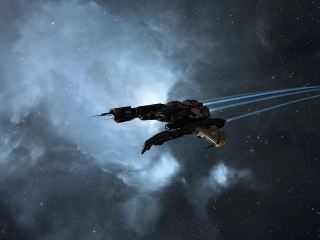 A Manticore done bombing us, about to die

At this point I had been online and undocked for about three hours, and it was really getting to be time to go to bed.  I am old and need my sleep.

So I slipped off to the safe POS in UMI while I brushed my teeth and considered my options.  I decided to just make a dash for home.  QPO, our staging system, was only 8 jumps away.

And, just to wrap up a quiet night, I had a completely uneventful run back to our starting point.

I understand that it is in the true nature of war that one person in one part of the battle can be bored and only hear reports of things going on, while others in the vicinity are part of life and death struggles.  And so while I spent most of my night orbiting the Scimitar anchor, other people were reporting great deeds and epic battles.

Such is the way of null sec.

At least we hold some sovereignty in Tribute now.

2 thoughts on “Tribute – A Rumor of War”