The Autumn Harvest Festival is upon us in Telara, and has been for more than a week now.  I like such events.  They can change up the game a bit, give you something new to do as well as a few nifty new items to collect.

The AHF, to shorten up the name, is another dual currency event, where there is a base currency… sap… no, really, sap… amber in color… that you can earn to buy little things like pets, including a crow that looks like a goth swallow and what has to be the scrawniest treant ever, along with other small things.  The big cosmetic item is a “farmer’s hat,” the icon for which makes you think you might be getting something in the Amish style, but which is, in fact, more of the conical Asian variety.

And then there is the rare currency, a signet of some sort… with icon reuse it looks just like a quest item I remember, a collectable, as well as a crafting ingredient I ran across at some point… which you need to get one of the event titles and the ever popular mounts.  People love mounts, though this time around the choices seem to be grayscale versions of previously seen mounts. 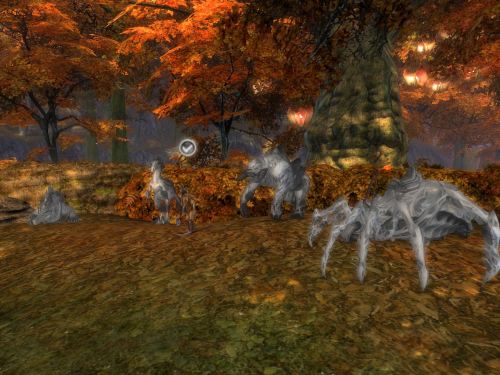 But I did not think that was going to be an issue.  You need five signets to get a mount, and the first day I picked up five quests, each of which gave me a signet, so this looked like a three day operation.  A bit on the easy side, actually.  Something for the weekend.

The one repeatable quest that gives out a signet token every day is simple enough.  You just have to go close two rifts of a certain type.

Unless, of course, the quest demands air rifts.

I had not really thought about the distribution of the various rift types throughout Telara previously.  I mean, they are all over the place.  But when ever I am asked to close one, the requirements are either vague (close a rift, any rift) or point you to a very specific rift that happens to be right there.  Instant adventure picks the closest open rift, while zone invasions… heh, your cup runneth over for targets.

Now, however, I am concerned with the plane of air and why they are not holding up their end of the invasion bargain here.  If I were on the plane of death, which seems to be the most aggressive of rift generating planes a lot of the time, I might be calling a council of invaders to propose kicking them off the team.  Air rifts just are not happening very often.

And even all of this wouldn’t be a big deal, except that air rifts seem to be the rift of the day every other time.

The first time out I couldn’t find a single air rift.  The second time out I found one at the edge of my ability to stay awake on a week night and gave it a pass.

And I realize that I could take one of my level 50 characters with a few planar attunement levels and respec them to the air attunement which, among other things, lets you pull air rifts at will.  The only problem is that with the change to currencies, event currency like the signets can no longer be pooled amongst your characters.  While I appreciate the freed up bag and bank space, now I have to actually go out and do this stuff with the character who I want to get the mount. (I haven’t quite gotten to the point where I want to respec, pull air rifts, log that character out, log another character back in, run out to the rift and close it.  But I could.)

Fortunately, on the other days the targets have been fire, death, or earth rifts, all of which are generally in ready supply.

The third time air rifts came up as the target of the day, I actually lucked out.  Zahihawass (Potshot) and Gizalia were on and we were grouped up and searching Telara for those elusive air rifts when Zahi actually came across one out in the Droughtlands.  We had hope!

I lay eyes on an air rift!

We knocked it out and then realized that we were committed.  Once you have one, then you have to find the other one you need or the whole thing is a waste.  And to show how rare air rifts have been for me, my level 48 mage Solyndro got the Prismatic Shoutout achievement for closing the air rift pictured above.

That is the achievement for closing one of each type of rift.  So he made it 48 levels, closing rifts pretty regularly, and never hit an air rift up until that point.

Well, we chased tears… rifts to be that you can force open… across the Droughtlands and were rewarded with another air rift.  We made it.

And then I realized I was logged in with the wrong character.  I wanted Hillmar, my instance group character, to get the mount.  He is my pet and mount focus.  Which meant I had to find two MORE air rifts.

Fortunately, luck was with us.  Zahi had been reading that air rifts were more common in the Droughtlands, where we had been hunting, and in Iron Pine Peak, the snowy zone in the north of Telara.  So I got out Hillmar and we went off that way.

Luck was holding however.  Iron Pine Peak happened to be having an air plane invasion!  More air rifts than I had seen in a long time!

Hillmar, despite being at the low end of the level range for the zone, managed to get into a raid doing the zone event and knocked out his two air rifts without dying.

Which got him to all of eight signets.  He needs fifteen for the mount.

So I have a nightly task to keep me busy in rift.  Though I would probably be happier if I did not have to search far and wide for air rifts.