I am not ready to celebrate my 10,000th match like some players more dedicated than I, but my renewed interest in World of Tanks, driven by the changes in the 8.0 patch and my sudden desire to drive a Hetzer, has propelled me to add another hundred or so matches to my modest total.

Hetzer in its natural habitat

I have found the nature of the German tank destroyers, which tend to be heavily gunned, fragile, but not very quick, to suit my own play style.  I stay a bit back under cover and let the other tanks expose targets.  When it works, it works well.  Sometimes though, it can be frustrating.  I recall a match where I had set myself in ambush on one flank of the Karelia map, which has three channels, making it almost a League of Legends map.  A medium tank moved ahead of me and spotted five hostiles approaching up.  Rather than baiting them back into my kill zone, he rushed forward to engage and was knocked out in short order.

I managed to knock out two of the hostiles as they exposed themselves and had damaged a third before I also was knocked out.  All the while, the chap in the medium harangued me for not rushing forward to die with him.

There is always somebody who thinks they know your business better than you do.  And while I am sure many players know how to play better than I do, the guy who just screwed up and got himself killed isn’t very high the list of those to whom I will listen.

Playing through the week I managed to rack up enough points to get to the next rung on the German tank destroyer ladder, the Sturmgeschütz III.

Of course, I realized as the battle started that I actually had a lot of shared experience left over from the early days of the Type-59 and that I could, you know, probably upgrade the damn thing.  So while I had spent a chunk of my gold on a fully trained crew, I had ignore the rest.

After the first battle, I went to explore what upgrades I could afford.  As it turned out, there is a lot of commonality between the Hetzer, which I had fully upgraded and which is now an “elite” tank in my garage, and the StuG III.   Using a bit of my remaining gold to convert some experience over to the freely shared variety, I was able to fully upgrade the StuG III for my second battle.

Just behind the StuG in that picture is the JagdPanzer IV, the next German tank destroyer in line, and which is described in the World of Tanks wiki as being “considered the worst Tier 6 tank destroyer.”  So I have that to look forward to.

I also opted for the camo netting, which boosts a tanks “you didn’t see anything” abilities by 25%.  I did not, however, have enough gold left to apply the paint scheme to the StuG, which is worth another 5% in that regard.  In hindsight, I probably shouldn’t have bothered with those emblems on my Type-59.

…and they called it “Peace”

Of course, fully upgraded meant I got cocky pretty quickly. 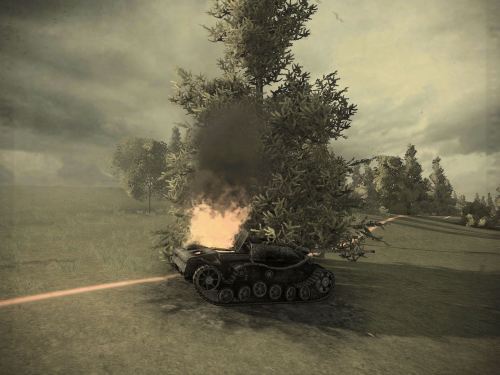 Like the tank destroyers before it in the German tree, the StuG III is best used a bit behind the main line to take out targets of opportunity.  Finding yourself in the front line generally means death will be coming for you soon.  Still, it is light and maneuverable and fun on par with the previous tank destroyers on the tree.

Meanwhile, I will say that the World of Tanks 8.0 patch, which is what brought me back to the game, has been living up to my expectations.  The graphics are very good, though they can be a bit slow to draw at times if you have your settings too high, and the new physics are excellent.  I have to say, the removal of the invisible barriers, which allows tanks to fall (or be pushed) off of high ground has delivered all the comedy gold one could hope for.  I saw a medium tank get rammed and shoved off the high, broken bridge in the middle of the Westfield map the other day.  Completely worth it!

And it looks like World of Tanks won the Golden Joystick Award for Best MMO, with League of Legends coming in second and SWTOR getting third place.

While Wargaming.net deserves congratulations on their victory, I think it would be extremely foolish to read too much into the win.  WoT ran a very aggressive “get out the vote” campaign for the event, which is always effective in player driven ballots.  And the fact that the it was WoT and LoL in first and second place certainly seems to demonstrate that the MMO category is a wide open field that means many things to many people.

And what with SWTOR coming in third, you might be ready to write off the fantasy MMORPG element in the category were it not for the fact that, due to the calendar constraints of the awards, neither Guild Wars 2 nor Mists of Pandaria were on the ballot.

In fact, I am not even sure how WoT got on the ballot.  When you are free to play and don’t sell expansions or boxes, does your latest patch count as shipping something new?  And in past years there wasn’t even an MMO category, it was just Online Games.  There are some blurry lines in all of this.

Ah well, popularity is nice, but making money trumps every time.  World of Tanks seems to be managing both though, so good for them.