Last week was the official 8th anniversary of the launch of EverQuest II.  It went live on November 8th, 2004.

Today sees the launch of the 9th expansion of the game, the interestingly named Chains of Eternity. 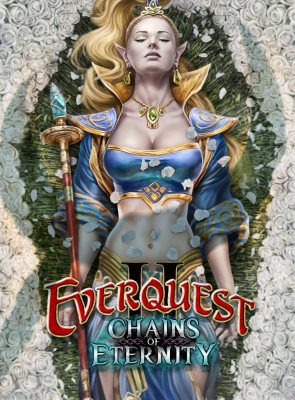 I find that name amusing because it sounds a lot like the subscription model business plan.  They want you chained to the game and paying for all time. (Patch notes for the CoE update here.)

But today also marks another event.  It was on this day, eight years ago, I started playing EverQuest II.

I wasn’t there right at the start because… I wasn’t really planning to play at all.  But Gaff, who had passed on the whole EverQuest thing five years previously was keen on this second chance.  I and a number of TorilMUD veterans, joined him.

And so began my love/hate relationship with the game.

For everything I enjoyed about the game… from simple things like just being in Norrath re-imagined to a player housing system that has really gone unmatched for eight years (we’ll see how Storm Legion housing stacks up when live) to zones that felt dangerous (like Thundering Steppes) to zones that were downright deadly (oh those flaming bats in Nektulos Forest), to the need to group for a good chunk of the overland content and all of the dungeon content while still allowing solo progress… there seemed to be a few things designed to just piss me off.

The litany of disappointments varies from person to person, but my own included bad home towns, racial ghettos, too many races, too many classes, too many skills, a meaningless division between Freeport and Qeynos, not enough character slots, high system requirements, and a disconnected zone-based game that seemed to toss all the worldly feeling that EverQuest had right into the trash.  I could go on and on.  Clearly SOE took away a very different set of lessons learned from EverQuest than other people did.

Add in a desire to try and steer clear of EverQuest lore for the first two expansions (Desert of Flames and Kingdom of Sky) and it really wasn’t the heir to EverQuest.

I played through from launch until just before Kingdom of Sky was released… at which time the game was suffering from horrible lag related issues that could render it unplayable at peak hours… before packing up for Azeroth, which is where nearly everybody in our original guild ended up.  Even the hardcore who derided WoW ended up in Blizzard’s cartoon world. 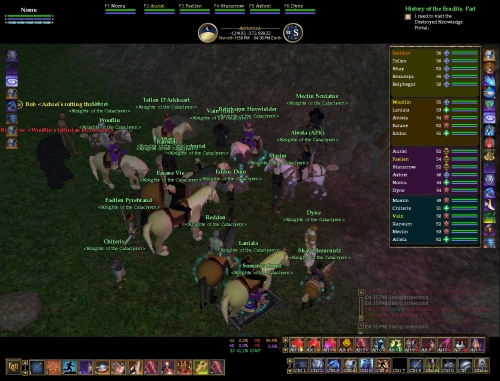 Almost everybody in this raid went off to WoW

I did come back for Echoes of Faydwer… released six years ago today… which promised to actually get back to some of the EverQuest lore and ended up being a reasonably successful expansion for those returning to the game.  But for me the game always seems to spend half its time trying to drive me away, a trend that continued up through last year when the instance group tried to come together to experience the game.  The game, however, had other ideas. The world, so changed from 2004, made trying to do the first 20 levels as a group so painful that free was too high a price to pay to play it.

Still, I feel a pull towards the game.  I have watched it change and evolve and move so far in interesting… the Krono currency will be something to watch… and sometimes very odd or silly directions… did nobody think through the Station Cash for expansions things… over the last eight years.  It seems to hold on to that ability to attract me and repel me in equal measures.  But I might say that about SOE as a whole some days.

As I said about World of Warcraft a while back, I think I am at a point where EverQuest II won’t ever be my main focus again.  I think my interest in it is now more that of nostalgia.

The relationship, however, is much more complicated.

How is your relationship with EverQuest II?

What is great about the game and what just really grates on you?