Raptr, the gaming social network and tracking software thing, and competitor to Xfire, has been working on their Raptr rewards again.

Last time around I got some cosmetic goodies in Rift for the Storm Legion launch.

This time they have been working with CCP for the launch of the Retribution expansion.

So if you use Raptr, play EVE Online, and rank at least “experienced” in the number of hours tracked in EVE, you should check you Raptr Rewards, as you might have an Inner Zone Shipping Catalyst waiting for you.

You have to claim it, get a code, go enter a code, log into your account, and so on and so forth.  And it didn’t even work for me the first time I tried.  I suspect it failed because I used Raptr’s browser.  In a real browser it worked however, and after that you can claim it like you do any other gift item from CCP, via the little gift box icon on the character select screen.

So I claimed it, logged in, and assembled it right away, then took it for a quick spin.

I named the ship “Killmail Bait” because I am sure somebody will want to shoot it just to have a new and different ship on their destroyed list. 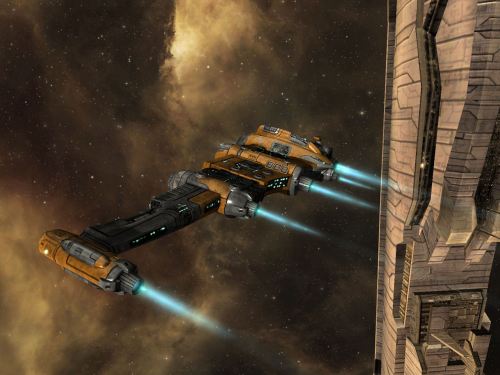 I did stay close to the station

The ship itself isn’t really anything special.  It looks to be a re-skinned version of the all-too-famous suicide gank destroyer, the Gallente Catalyst.

Other than that, it appears to be the same.  Same number of slots at high, medium, and low.

It might actually have a bit more heft on the power grid and CPU fronts, if the Catalyst article on EVElopedia is up to date.  It also seems to be beefier on defense.

Ironically though, for a something called a “shipping Catalyst,” it does not hold any more cargo than the standard model, with the same 400 m3 of storage.  Maybe they meant “slightly more secure” shipping.

So I have a somewhat beefier Gallente destroyer in my ever growing fleet of ships.

I am not sure what I am going to do with it.  I could take it out to null sec and keep it around for comedy ops, or to just be the odd ball ship on kill mails.

I considered opting-in on the Goonswarm Secret Santa program so I could give it away, though in reading the “Dear Santa…” thread, I don’t see a lot of people asking for a slightly better Catalyst.

I could always have another screen shot contest with this ship as one of the prizes.

Or I could let it sit in my hanger like several other one-time ships I have gotten in the past.

What would you do with the Inner Zone Shipping Catalyst?

6 thoughts on “The Raptr Catalyst”