As I mentioned at the end of the last month in review, the more pen and paper focused wing of our Saturday night group, Potshot, was looking into more small party adventure-centric options for our group.

And so he headed to GOG.com to grab Neverwinter Nights 2, a game first published in 2006.  It is the Obsidian Entertainment second version of the BioWare original.  For $20, you get the whole package including expansions all wrapped up, updated, and ready to download and install.

The download is 6GB, so that part was an over-nighter for me, but otherwise things went smoothly.

NWN2 is based on Dungeons & Dragons 3.5, which pretty much means nothing to me at this point.  I still think of 2nd Edition, with its THAC0 and such, as “the new stuff,” so anything after that is strange.  But it is also based in Forgotten Realms, which is the D&D setting nearest and dearest to my heart.

Potshot has grand designs for NWN2.  It comes with a tool set that lets you be the dungeon master and design adventures through which your friends can play.

And so this past weekend was spent trying to get the basics going.

I had downloaded the game and run through the tutorial, most of the information from which I promptly forgot once I left the game, when Potshot and I started to work on playing together in the same game.

Which is where there were some issues.  A meandering narrative after the cut.

Online play was a problem.

Official support for online play, which depended on the Atari run servers, was shut down back in December.  This is almost always what happens when a game depends on the game company to enable internet play.  There are exceptions.  You can still play Diablo with friends online.  But Blizzard is rich like few game companies.  Other companies, like EA, tend to close off such services as games age and the player base shrinks.  Remember that one SimCity players.

So, official support was gone.

My good friends at GameRanger, which is where I went to look next (and where I got the tip about the unofficial AOK expansion) has got you covered if you want to play the original Neverwinter Nights with friends over the internet, but has not yet added support for NWN2.

Potshot found some patches over at the Neverwinter Vault at IGN that included modified launchers that did, indeed, let us get through to some set of servers somewhere, where we could see games online and join them.

Creating our own games so the we could join, that was another story.  After tinkering with that for a while without success, we moved on to other options.

In the end, Potshot managed to setup port forwarding in his router (thanks to detailed information at Portforward.com) so that I could, via the ‘join game directly’ option, get to his game by just entering his current IP address.

And, hey presto, we were in the same game.

At which point you have to select or create a character.  Fortunately, it comes with some pre-made characters as well as letting you choose from characters you already created.  So you can get your custom character ready in advance.  I chose the character I made for the tutorial, a human fighter named Vikund, and joined Potshot, who had a dwarf fighter named Fergorin, in the game.

We chose the base campaign because… well… why not?  This was just a fact finding mission, why get complicated.  We were able to run around and accomplish a few things, and we learned a bit about party composition.  People take over the slots that would normally be companion NPCs in multiplayer, so if you bump the NPC who can pick locks, for example, you might find yourself stuck.

Can’t I just break it down?

I was also able to work some more with what might be the more annoying aspect of the game, at least for those coming from a WoW-like MMO background, the camera.  The camera seems to view itself as an adversary in the scheme of the game, as I spent as much time fighting with it as I did with any NPC.  There are a few camera modes from which you can choose.  Eventually I settled on the explore mode, which seems to equate to the camera saying, “fine, I give up, do whatever you want, but don’t expect any help from me!” but which at least gives you the most control over where the camera faces. 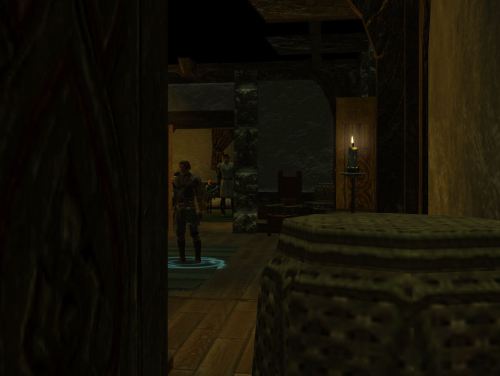 Not an atypical choice of view for the camera

Our attempts at appearing in the same game at the same time a success, Potshot went off to install the game on Mrs. Potshot’s computer for further experiments.  The other two members of the group were not slated to join us, so it would just be the three of us blazing this new trail.

We managed to get back together late in the evening.  I was again able to join thanks to the magic of port forwarding while Mrs. Potshot was able to join the game over a LAN connection.

During the gap in time I went and rolled up a rogue named Sigwerd to make sure the party had the door and chest opening capabilities that we might need.

We joined up and started through the basic campaign again.  Again, we were at the “proof of concept” stage, so we wanted to try to keep things simple. 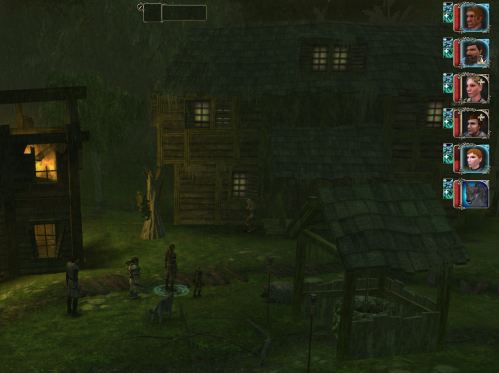 Our party in town

Certainly, as primarily a player of MMORPGs over the last decade or so, there were some things that clearly will take some getting used to.  In the pre-made campaign at least, there was quite a bit of recorded dialog featuring Balok the elf, who had to intone the plot to us and respond to our questions.

Okay, he isn’t Balok, but he sort of looks like Balok with hair… Google it

This is no big deal in a single player campaign, but with three of us playing, any time anybody spoke to an NPC that had interaction options, all of us were stopped and had to witness the interaction.  That kept all of us on the same page I suppose, but was jarring at times when we had wandered apart.

The main interaction points are fully voiced on the NPC side of things and include the classic BioWare (this is an update of a BioWare product, so it counts) response choices.  As usual, there were times when none of the choices reflected what we wanted to respond, and there was one where the “right” choice… the one that would move the story on… was the one we kept avoiding until it was the only choice that remained.

Way to let you control your character.

Of course, as with many such encounters, it is just the illusion of choice, giving you multiple slight variations that get you to the same point.

The battle in town had many such dialogs, and they grew trying after a while.  But at least the rogue’s lock picking skills came in handy. 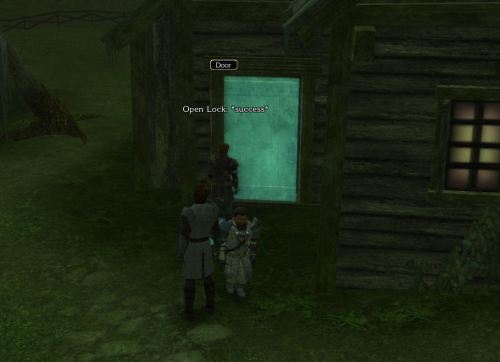 Let me just slip my credit card into the lock…

Eventually, we progressed the story far enough to get out of town and into the wilds… well… the wilds right next to town.

Out on the Mere

We were after a magic dingus that Balok, in all his wisdom, decided to hide in the lair of the lizardmen.  So our first real assignment outside of town was to fix his bad idea.  That lead us to a very nicely furnished and tiled underground dungeon where we proceeded to reduce the lizardmen population rather drastically. 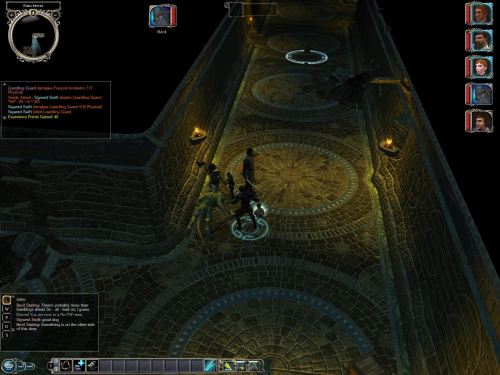 Nice… for an underground lair in a swamp

Combat felt a little awkward, being basically “click to attack” with a cool-down timer at the top of the screen.  But feedback on attacking was… not very satisfying I guess.  It was hard to tell if I had attacked.  Sometimes a damage number would float up.  The message screen would show some stats about damage rolls and experience gained, but it felt a bit out of sync.

And one could argue that this is not an MMO, so combat should not be fast but more deliberate.  Except, of course, for the fact that combat seemed every bit as fast as an MMO and “click to kill” is about as deliberate as Diablo III.  So I remain confused.

I also, as mentioned before, completely forgot what I learned in the tutorial, which included how to shoot a bow.  So at one point I just stood around with a bow in my hand rather uselessly.

Still, we managed to move the story forward.  We found the magic dingus, took it from the lizardmen, returned it to Balok who then sent us off to deliver it elsewhere, telling us basically he was sacrificing us to save the town.  Did I mention he was our foster father? (Ours in that he played the role for whoever was speaking to him.)

Anyway, with state supplied relatives like that, getting out of town seemed like a pretty reasonable proposition.  If it was this excuse we would have found another soon enough I am sure.

So off we went, on the road to… um… Neverwinter I think.  I forget the final destination at this point.  Or what we were supposed to do once we got there.  Or what the magic dingus was about.  Or what it was actually called.

I probably forgot all of that because the first thing we did upon getting on the open road was stop at the first Inn we spied.  Because any D&D adventure that doesn’t include an inn is NO D&D adventure, right?

And so we busted heads for a bit, sat down for a drink, and then got up and busted heads when the inn was suddenly attacked.  So we cleared out the inn room by room, Sigwerd taking this opportunity to unlock and loot any container he could find.  (He is chaotic neutral, which I take to mean “distracted by anything shiny… like gold.”)

At this point it had gotten somewhat late, so we took a final screen shot of us together along with out new found drinking/fighting dwarf friend and called it a night.

At that point, Potshot saved the game.  We shall see what happens when we try to resume I suppose.  That is the stage II test I guess.

Overall, the test was a success.  We could get together and play over the internet.

There is still a bunch to learn, and more to get used to.  The graphics vary.  Landscape and interiors look very good for 2006.  Character models less so.  The UI is good and bad at times.  We will need to learn to actually play and use our skills correctly.  And, of course, the camera still hates us all.

But it could be a viable platform for Saturday night.  And if Potshot goes nuts and creates his own campaign for us… or if we find a different one somewhere… some things, like the awful dialog pieces won’t be an issue.  Maybe we should try one of the expansion pack adventures that came bundled with the game.  Or we can finish what we started.  We shall see.

4 thoughts on “Backwards in Time to Forgotten Realms”