The goal for World of Tanks this year is to get into a tier IX vehicle.  Not a particularly steep goal, given a whole year, unless you take into account my divided play style (German TDs along with Soviet and French heavies, plus dalliances with US light tanks, SPGs, and such) and the fact that I do not play all that much.  I am good for a few games in the evening and maybe a longer stretch if we platoon up on Saturday night.

With that in mind, I decided that I was going to try to blow through the KV-3 as quickly as possible.  I would buy the minimum upgrades and just drive for the KV-4.  I figured I would be spending a long time with the KV-4 in any case, better to get started on it as early as possible.

Not that I was very speedy about it (see play style above), but after a month of the KV-3 I had purchased the minimum upgrades to make it useful and get to the jumping off point for the KV-4, I had enough experience.

And then I looked at the price in credits for the KV-4 and realized that, after buying and equipping the Jagpanther and the ARL-44, I was a bit short when it came to the price tag.  About 1.2 million credits short.  Not an insurmountable goal to reach, but one that will take me a while.  So I splurged and upgraded the KV-3 so that the KV-4 is the only thing left on its tree.  The main deal was getting the 122mm D-25T gun.  That is the big gun on the KV-3, and is distinguished by its muzzle brake. 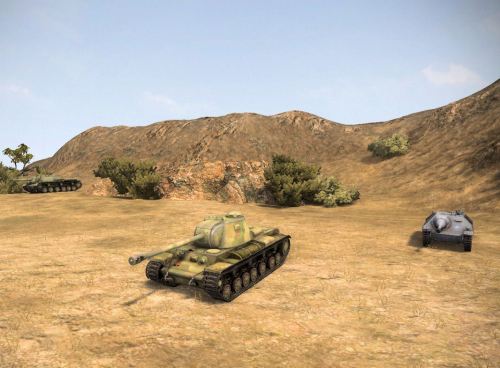 So with a new toy, of course I had to take it out for a spin.  And luck was with me, as I drew one of my favorite maps, the El Halluf encounter battle.

I like this map because it makes sense to me.

It is yet another “take the hill” map.  Unlike, say, Himmelsdorf, where the hill offers no advantage when it comes to the actual capture point (I’ve been on teams that have lost while still taking the hill many times), taking the hill in El Halluf will actually give you an advantage.  The hill overlooks the contested cap, so at a minimum holding the hill lets you keep the other side off the cap.

El Halluf and the Hill

So every El Halluf encounter battle starts off with a rush to the hill where the heavies go toe-to-toe while the mediums dart in and out, the TDs snipe at any exposed parts, and arty tries to rain death over the various obstacles.  And I was the top heavy on our side, so it was up the hill for me.

The StuG III got potted by arty almost right away (a Hummel and an SU-8) but the three of us remaining managed to jink around enough while getting in hits and pulling the other side out just far enough to take their shots so that our TDs could get in a shot now and again as well.

And aside from the Cromwell just begging me to shoot him in the back of the turret by blocking my shots all the time, and a Three Stooges moment when we all tried to crest the hill and squeeze through the gap at the top together, it worked.  The 122mm gun tore into the other side and did huge amounts of damage.  I was able to absorb the return fire, keeping myself angled.

We cleared the hill top.  The mediums chases the T-34-85 down the other side while I got into an arty shadow to help cover a couple of team mates who had crept onto the cap.  I managed to get in a couple more hits, including a long range shot at a Jagpanther that was making a last moment run to try to defend the cap.

We won.  I got the top score along with Sniper and Steel Wall badges, all of which made me quite happy.  It also made me feel cocky and invulnerable and I ended up dying fast on the next two maps.  Every fight is the same, every fight is different.  But once I settled down, I started doing okay again.

I will be driving the KV-3 for a while now as I build up credits and experience to get into tier VIII.  So it is a good thing that the big gun does its job. 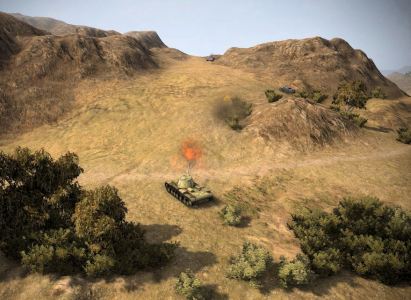 Starting up the hill, StuG up ahead

KV-3, T-43, and Cromwell working together

Crestinng the Hill, dead heavies around us 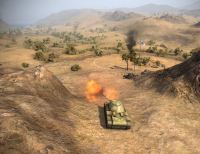 Long shot at a Jagpanther 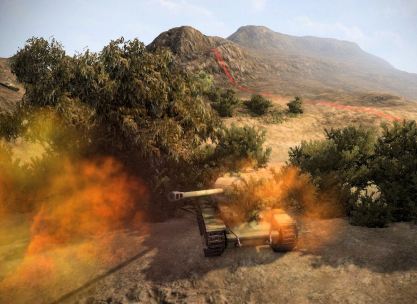 The pictures in this gallery were taken via the replay option.  I wasn’t taking pictures and zooming so far out mid-battle.  I particularly like the last picture in the gallery, as it shows that the muzzle brake is taken into account for graphics when the gun is fired.

By the way, this is why I really like the replay option.  I do not go back and look at most of my fights, but being able to review a really memorable fight like this is very nice.  Plus, screen shots.