I wrote some about my return to the comforts of Azeroth last week, but I still had a couple more days in which to play.  So I spent a bit of time wrapping up the zone now known as Northern Stranglethorn Vale.

I finished up all the quests from the rebel camp and the Nesignwary compound, the latter earning me the Green Hills of Stranglethorn achievement.  However, with achievements shared across characters, I technically had it already.

I am not sure about how I feel on the achievement sharing change.  On the one hand I am happy enough not feeling like I should repeat some of them or being able to divide up the burden between among characters.  On the other hand, each characters story is mixed in with the others.

After those two quest hubs, there is a third down at the south end of the zone where I got in the remaining few quests for the zone achievement.

That is one I did not have before.

I actually stuck around for one final quest, Be Raptor.

Go on, be Raptor

That was kind of a cute one.  You take control of a small raptor who has to escape from Zul’Gurub.  I am not generally fond of quests that make you be somebody other than your character, but this one was simple enough.  You have to get through a couple stages of evading to escape.  But if you fail, you only go back to the start of a given stage rather than the whole thing again.  I eventually escaped and collected a bit of upgraded equipment.  You get some nice blue equipment as choices.

At that point I was done with Northern Stranglethorn and needed a new place to go.  The quest givers handed me a quest to head south into the cape, which is the southern half of what was once Stranglethorn Vale.  However, given how far ahead of the zone I managed to get in levels, I thought I had better seek something closer to my level.

So I headed back to Stormwind to see what the big board had to say.

There is the board in Stormwind, the Heroes Call Board, that hands out starting quests that send you to zones based on your level. 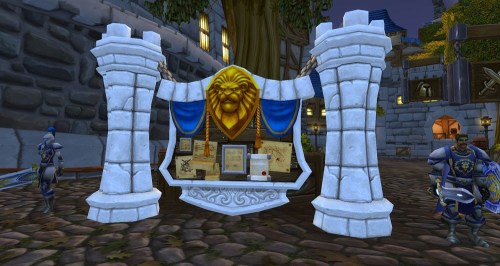 For me, at level 34, the recommendation was Western Plaguelands.

Which brought me back to a discussion we were having in the comments on my previous post about flight points.

Back in the olden days, you got flight points by traveling overland to the flight master and clicking on him.  In what we might call “classic” WoW, that worked out well enough.  There was often just a single flight master in any zone and getting to him was generally part of the quest line in any case.  Experience was paced so that, for the most part, you didn’t skip zones.  There were some parallel starting zones that you might have missed… the night elf zones if you were Alliance… but the path narrowed eventually.

And then times changed.  Expansions came.  Leveling 1-60 got faster.  New flight points were added, meaning there could be multiple stops in a single zone.  It became quite possible to miss flight points, even key connecting flight points.

So in the Cataclysm time frame Blizz changed things so that flight points opened up as you reached the appropriate level.  You would never miss an intermediate flight point because you outleveled a zone, and you would always be able to fly into whatever new zone opened up to you because of your level.

As a grizzled old vet I grumbled about how easy kids had it these days and how I had to walk out to flight points on foot because we didn’t even get mounts until level 40 back in the day.  But, given the changing environment of the game, I guess it made some sense.

However, I am informed that with the last big update, Patch 5.2, Blizz did away with the automatically appearing flight points.  It was a return to walking to flight points.  Which was all fine and dandy.  Grizzled old vets smiled smugly to themselves because, of course, we know how to get everywhere on foot.

So when it came to getting getting to the Western Plaguelands, I was presented with this problem: 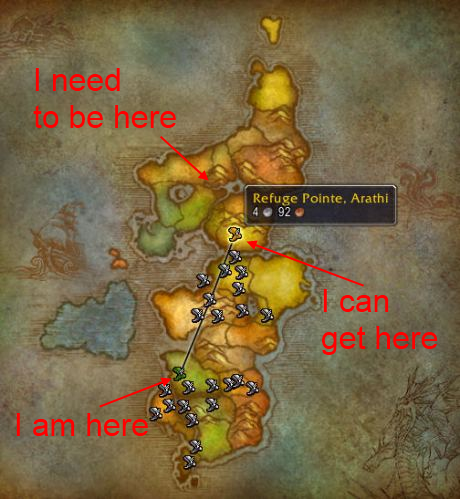 My northern most flight point was Refugee Point in Arathi.  But that is still a couple of hops shy of the Western Plaguelands.  Back in the day you would probably have already been to Southshore.  However, that was overrun by the Horde as part of Cataclysm.  So it is kind of hostile territory between you and WPL.  Following roads means running through the guarded wall, through all of hostile Southshore, around through even more hostile Tirisfal Glades, and eventually through the guarded gate and into WPL.

Or, if you have had to explore in the past, you probably know you can just go from the river around Southshore, which you can see on the map above, and follow it north to the lake and turn left.

Aside from the guards at the wall between Arathi and Southshore, the path is pretty clear.  And if you’re smart, you’ll go grab the flight path first.  That is where the starter quests are for the zone, so I am not sure why the quest in Stormwind sends you farther into things.

Once there it was the updated version of the old Plaguelands.  Some areas have changed hands.  Some are no longer as hostile.  Some have fewer bad guys on the ground.  And in areas where enemies are thick on the ground… which is generally an indication that you’ll have to kill 10-20 of them… they are involved in a battle with a like number of allies.   This is the now standard device for Blizz, as it make the area look active, you don’t get the awkward “what are all those bad guys doing just standing around?” questions, and it means you can wade in without a lot of worry about adds or aggro radius.

But it still means killing a bunch of bad guys to fulfill an arbitrary count or to get a sufficient number of drops.

And at that point my enthusiasm began to fall off.  The Plaguelands were never really a big deal for me in the past.  I had a lot of characters go through, or get mired in, Stranglethorn Vale.  There was a sizable love/hate relationship with that zone.  But the Plaguelands were the end of the line, or a quick bridge to Burning Crusade content.

Sunday rolled around and I realized that my seven days was coming to an end, so I thought I would log back in and get a couple more screen shots to wrap things up.  But I was too late.

Ah well, I was pretty much done.  I had a nice little visit to the game.  I was reminded of what I miss about the game, its quality and humor and place in my memories.  And I was also reminded about why we, as a group, do not play it any more.  The overland game is really a solo game now, more so than it ever was, while the small group game, instances, are now chopped up into quick and easy segments which can be run in under an hour.

All of which makes me wish, once again, that Blizzard would take up the classic server idea.  I would subscribe again for an official Emerald Dream server.  It is eminently doable.  And it is never going to happen.  Blizzard just isn’t the kind of company that would even understand why players would want to play anything but the current, new, fixed, good stuff.

I enjoyed my seven days all the same.  Thank you Blizzard.

But seven days was probably enough for now.

10 thoughts on “Wrapping Up My Seven Days of Azeroth”