Two weeks in a row in Telara!

However, this week around we again fell short of a full group.  This is becoming the most common story for our group in 2013.  But four of us were on and logged in.  Our group was:

And to open up the evening, we did another round of carnival games.  This time I left the group set to public and we ended up in a balloon popping raid in Meridian. 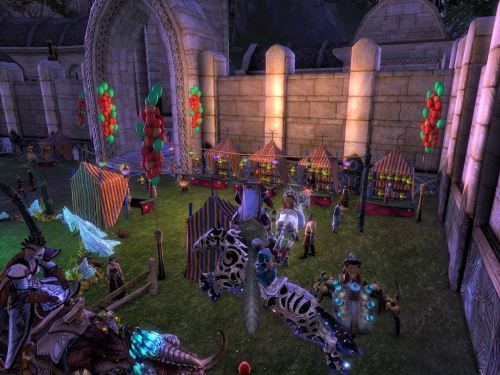 We’ll all pop together when pop…

When you get 8 or 9 people together doing this, finishing up the weekly quest for 50 carnival games goes by pretty quickly.  We soon all had our second doubloon out of the three required to get the Aurora mount.

Of course, with that over quickly, we were left wondering what else to do.  I suggested the Codex warfront, as there were several carnival related achievements tied in with it.  That drew a pretty universal sigh of revulsion.  And, I had to admit, we hadn’t fared well previously in Rift’s versions of battlegrounds.

Zahi suggested we roll with another level 50 expert dungeon to see how we would manage with just four of us.  That meant we would need a tank and would have to walk to a dungeon, as the LFG tool doesn’t work with a short group.

Zahi volunteered to respec in a tank role and I rode on out to a dungeon.