The instance group continued its streak, and it ended up being just Potshot and I on Saturday night.

On one hand, it is a pain that we have not yet made another run at Exodus of the Storm Queen.  On the other, with just Potshot and I, the possible alternative game choices are pretty large.

I threw out “Boom or Vroom,” putting up World of Tanks versus Need for Speed World as an opening bid.  Potshot said “vroom,” so we were off to race cars for the evening.

This is the upside of the free to play model, that we can just decided to play that night, patch up, and get going without having to worry about a subscription or anything.

Of course, the first item up for discussion was, what should we drive.

The last time we got out onto the streets we started of with a variety of different cars, but finally decided we should all buy the same car and leave it stock, so that there were no vehicular stats tilting the races.  Our decision back then was to all buy the Lancia Delta HF Integrale Evoluzione.

This time we thought we ought to get something new, so it was off to the car dealer.

We were tempted by the Ford Capri being offered.  That was a car we both grew up around as an import sold through Ford’s Mercury brand dealerships.  I still like the styling of the ’70-’73 models.  However, NFSW was only selling a very tricked out race version of the car. 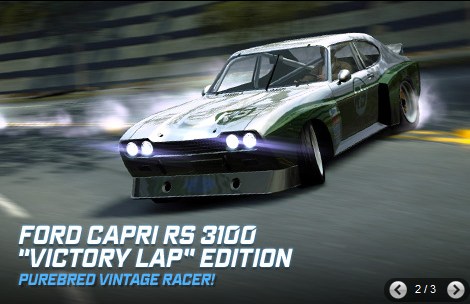 Both Potshot and I lean towards vintage cars, but prefer street models, not the heavily modified race cars.  We grumbled a bit about the game not catering to our demographic with their more modern super cars and race prepped vehicles, and continued down the list.

I eyed the Jaguar E-Type for a minute.  If it had been the convertible or the 2+2 body styles, I might have insisted.  But they only had the 2 door coupe, which always looks odd to me.

Eventually Potshot found a car on which we could both agree.  It was vintage, a formidable racer, and not outrageously over-styled.

The car dealer had our car.

The race prepped version of the Porsche 914s of our youth, the body lines were still intact that is looked more like the street car than a track only configuration.

After purchasing them, it was time to customize.  I have said before that the car customization… paint and vinyl and cosmetic parts… is one of the high points of the game.  The interface is suboptimal in my opinion seeming, as Potshot pointed out, to feeling the need to reinvent the wheel on a couple of UI fronts.  But it is still outstanding overall and I reiterate my call for multiple “wardrobe slots” for each car since the only way to change a car is to undo what you have already done.

We both kept it reasonably simple.  We did not want to spend the evening doing custom cars, as that is a solo activity.

I went with a simple yellow paint job.  My uncle had a Porsche 914 in that color.

I tinkered with racing stripes for a bit, but decided to leave it as just a solid color.

Potshot went with a silver finish, a racing stripe, and a number. 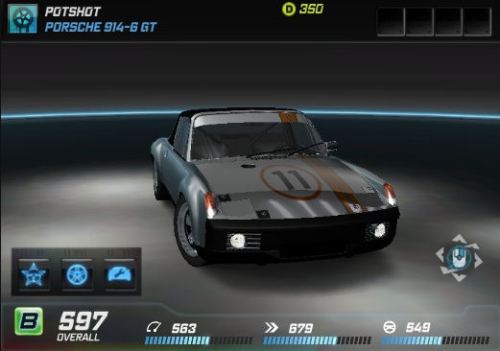 From there it was off to the races.  We started off with just the two of us in some sprints, which are point A to point B courses, to get a feel for the cars.

I have to say that another strong point of the game is how they manage to give cars their own unique feel given the crude simplicity of the control system.  My Nissan 2000 GT-R is a B 599 rated car, which means it is effectively equal in performance, yet the two cars drive nothing like each other.

The 914 is low slung, tightly sprung, and prone to suddenly flip over or go up wildly on two wheels if you pop over a curb or something during a hard turn.  And if you use the parking brake to unstick the rear wheels during a turn… something that works very well on my GT-R… you are likely to end up facing the wrong way if you are not careful.  But otherwise, it sticks pretty hard to the ground with its low center of gravity and shows little body lean in turns.

We ran a few races. 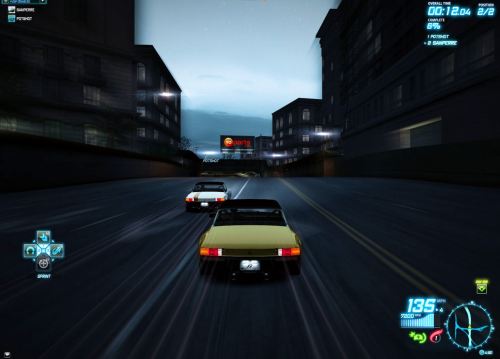 Eventually we got the measure of the car and wanted something a little more challenging.  Two people racing is fun, but really isn’t enough.  When we had three before, the third person multiplied the fun considerably.

So we decided to join public multiplayer races to pit ourselves against the general public in the game.

Which is where we ran into a problem.

As a group, you can create private matches quite easily.  But if your group wants to join a public match, there does not appear to be a method to “join as group.”  At least I could not find one.  So we tried to both join the queue for the same race… and ended up in different versions of the race.

Eventually we were reduced to the count down to button click to make sure that we got into the queue at the same time.  That seemed to work.  Only we then ended up in a race with just the two of us.

Fortunately, once you finish a race, you have the option to run it again.  So we stayed with the same course for a while, and with each round more people joined.  This lead to some great races with no evidence of hacking or cheats.  Not bad, considering on any given night, if I run five races, I will see something extremely dubious in at least one.  I have seen a proliferation of a “start early” cheat/hack lately that basically lets a player take off while everybody else is still waiting for the go sign.

I also ended up having probably my best (and luckiest) come from behind victory ever.  I had Fraps up and was recoding races in hopes of capturing something interesting.  A good race, a horrible crash, or a blatant hack would do.  And so I was able to capture the lucky run.

That is the Bristol & Bayshore course, and I fall behind right away, running in 6th place out of six initially.  But, as I said, being behind actually makes for a more amusing video.  You can see people crashing about, hitting each other and objects on and beside the road.  At a couple of points there are lamp posts pin wheeling back towards me.

And, of course, other cars.  NPC cars go flying at various points.

But at just about the 2 minute mark into the video the race comes to its last big turn, a sharp 90 degree cut at the water tower that will punish you for coming in too fast.  At that point I was in 4th place and going way too fast to make the turn. 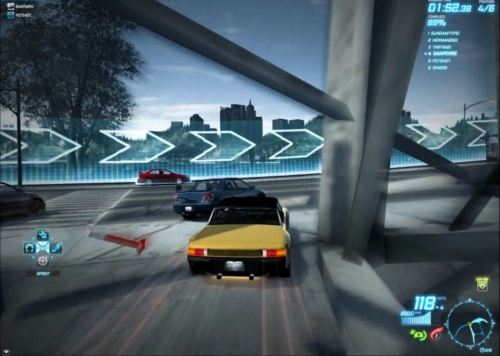 Too fast to turn

However, I happen to be lined up just right to strike the Subaru Impreza in front of me. 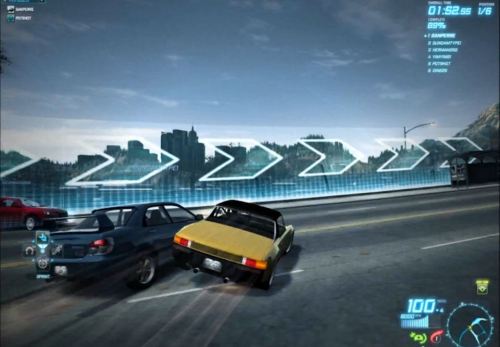 That gave me enough of a bounce in the right direction that I was able to correct and head towards the finish line without shedding much speed at all.

I sent the Subaru off into the pack.  You can see the other cars headed towards, or flattening out against, the course barrier in the first shot.  The Subaru blocked them while I ran off to the finish line.

We ran a few more races after that, but for me the peak of the evening had been reached.

So we called it a night soon after that.  Again, Need for Speed World manages to annoy and delight.

Need more retro cars and better group management, but once you get past that, there is fun to be had.

Notes on the video.  That is my first attempt to upload at 1080p, which Solf recommended previously.  Since I have a 4:3 aspect ratio monitor (1600×1200), there will be black bars on the sides, probably making the video even less viewable in the narrow format of my blog.  But if you go to YouTube and select 1080p format, video quality should be better.  If you actually watch it… and almost nobody watches my car videos… feedback would be appreciated.

The music, put in to cover the fact that Fraps only recoded Potshot’s side of our race commentary (I have to fix that), is Dog Pound Hop from the Ren & Stimpy sound track album You Eediot! It happened to be just the right length and fits in well with the video I think.  Plus I like the song.

2 thoughts on “Need for Speed World – Porsches in Palmont”