Just about two months back it was announced that Google Reader was going to be shut down.

The reasons given were declining usage and the Bizarro world excuse that killing it would lead to a better user experience.

I cannot speak to the former, except to say that Google pushed a lot of people off the bus themselves when the screwed up the UI for a few weeks, but the latter still smacks of “More people using Google Plus would make the user experience there better.”

I point at the work they have done to further integrate Blogger into Google Plus as evidence of what is important to Google.

But whatever the reason, there was much talk about jumping ship before the July 1 end date and the “declining user base” ran off and pretty much swamped every comparable service.  Numbers clearly mean something different at Google.

I too began looking around.  I put together a list of possible alternatives, which I will reproduce here:

And then… I pretty much did nothing.

July was still a ways away.  There seemed no point in joining the rush.  And who knew if Google would change their mind.  Stranger things have happened.  So I decided to let things settle down a bit.

Feel free to embellish your choice or warn people off of bad choices in the comments.

Meanwhile, Google continues to do its best to make me not use Google products.  In addition to Google Reader, they are also shutting down iGoogle, which has been my default home page for years now.  They have been tinkering with YouTube, including making me link my YouTube account directly to Google Plus, which ended up unpublishing all of my videos for a while.  More on the “what is important to Google” evidence pile.  And they let Bob Scoble loose with Google Glass, which everybody calls Google Glasses, because that is what they are, which sent the message, at least to me, that they are perfect for crazy people.

And then there is Google Plus, the gifted child at Google, the web app on which they are devoting their focus.  How was that last update for everybody?

I swear, every time I look at Google Plus, something happens to piss me off.  They banned me for using a pseudonym, then quietly let me back a couple months later.  Then they made changes, screwed up my account, linked it to YouTube, which screwed up that account, and now they have made their bad UI even worse for the moment.

Yes, I realize that “bad” is relative.  You might like only being able to see four or fewer posts at a time, each with a big picture, the author’s avatar, an excerpt of the first paragraph, and the first few comments. 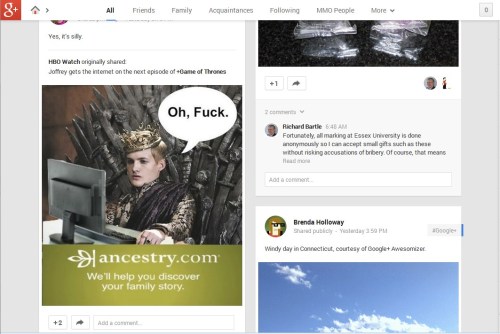 My view of Google Plus at the moment

Me, I read a lot of things online.  If I cannot see 20 or more headlines at once, I end up doing too much scrolling.  I want a list with title, author, source, the first sentence of the post, and maybe a general topic tag.   A UI like the  one they are pushing is high on the list of reasons I do not invest much time in Facebook.  The interface does not suite my needs.

The irony here is that, if Google gave me a UI more suited to my needs… make it an option if not the default… added in RSS feed reading with the ability to share with circles and the like, and just stopped pissing me off for a little while, I would probably go use Google Plus.  There are already people there I would follow.

Ah well, the life of an outlier.

Addendum: A write up comparing the Google Reader alternatives.