MY PEOPLE: TEST is vowing to stand down and cede us J5A, leaving the first ‘battle’ of Fountain to us. Why? Of 900 online in their alliance, barely more than 300 are in Karan, their new lowsec staging point. Our response to this will be more sieging and flaying. TEST is vowing to return for the J5A armor timer.

-Jabber Broadcast from The Mittani to a thousand online CFC pilots

One of the theories flying around after the beginning of the war for Fountain was that TEST was a sure thing to win because they bring the numbers, as happened at NOL last earlier.  Meanwhile, it was speculated that Goons wouldn’t show up in numbers for a fight that is over mere ISK.  Gevlon, ever the people person, assured us that is not how Goons are motivated and that The Mittani has made a fatal mistake in that regard.

Now, we are only one fight into the war, but like many pre-war theories from ages past, that one might need to be revised a bit.  We shall see.

Last night we were getting ready for our first big attack of the war and, as noted, TEST was expected to put up a defense.  Time dilation was running in B-DBYQ an hour before the 03:30 EVE time call for fleets.  I sat outside the station and watched capital ships jump in, with as many as nine cyno beacons running at once.

When the time to move off to the fight came, time dilation quickly fell into the 10-15% range as three fleets went to undock and move first to staging points and then to the gate to J5A.

Earlier in the day I had taken a jump clone back to VFK where I bought a Caracal, as that is one of our fleet doctrines for this war.  It is cheap and I wanted to shoot something.  I caught a convoy back to B-DBYQ later, as the route to the front has been heavily camped.  Everybody knows where we are going.

So I got out my Caracal and joined Raeglan’s fleet.  And then we farted around in B-DBYQ for about 45 minutes trying to overcome tidi, mumble issues, and the usual problems of getting a thousand people pointed in the same direction.  At one point we were sitting in a POS and a Ragnarok jumped straight in with use sending people flying.  In Soviet POS, titan bumps you.

Eventually enough people made transitions… they left the station or they jumped into or out of the system… that the tidi went away.  The Caracals moved out and made the jump to J5A.  There, we flew to another POS and waited.  Then the announcement at the top of this post came through.  There would be no contest for the ihub at this time.

We went by and took a couple of shots at the ihub as the cap fleet was putting it into reinforce.  Then we jumped back to our POS while the coalition leaders decided what to with the forces at their disposal.  There was talk of putting more things into reinforce.  While we were there, we got the message about the ihub.

At that point we had been out and about for 90 minutes and I was ready to call it a night.  I had been up early for work that day and I had to get up early again for my daughter’s soccer tournament in the morning.  So I broke off from the fleet and headed for home.

Lulled into a false sense of security by the fact that there were more than a thousand of us in the vicinity, I jumped back into B-DBYQ and headed straight for the station undock without checking anything.  This was, of course, a mistake.  I set myself in motion and tabbed out to another window, then tabbed back to find that Rote Kapelle had set up a bubble on the way to the undock.  Ripard Teg, aka Jester, was there, making it the first time I have seen him in game, even if the meeting was  extremely short.

There went my Caracal and capsule.  You snooze, you lose.

My first loss in the war.  It certainly won’t be my last.

I had at least set my medical clone to the station, so I popped right back into game at my destination.  And it looks like more ships are going up on contract at B-DBYQ, so I shouldn’t have to fly back to replace my loss.  And I have my two logis and a Celestis that Gaff hauled out for me.

Gaff got tapped for cap fleet and took a few screen shots of their op for me.  I have some of my side of the operation as well.

Carrier coming in before the fight

Mess at the undock 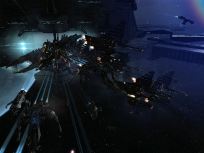 Looking back at the undock 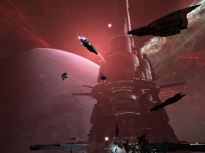 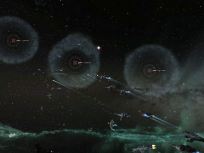 Tidi kept the system scan up for a while

More caps jumping in by my Caracal

Ragnarok jumps into our POS

Caracal fleet on the move 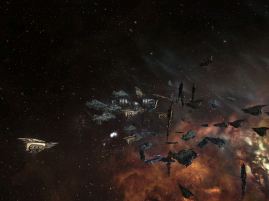 Cap fleet at the ihub 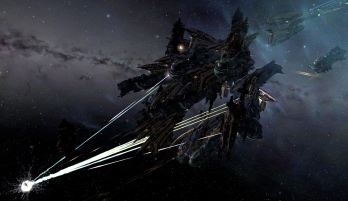 And the war goes on.  Gaff has been out and about with cap fleet today.  I am sure there will be more to follow.  Fights loom.

Meanwhile, Endie has a summary of the war so far.