After having skipped a couple of weeks, we decided that we ought to have some sort of instance group night last Saturday.  And seeing that Rift had just done the big free to play change over, we thought we ought to patch up and see what things looked like in Telara.

1.7GB of patch later, I logged in only to find out that my character Hillmar had been deposed as guild leader because he had not logged in for 36 days.  Jollyreaper was promoted to guild leader on the basis of the “who touched it last” algorithm.  I had actually logged into the game more recently than that, but not with Hillmar.  And, something for the list of unhelpful features, when I did log in with Hillmar, I found not only the “you’re out!” message waiting for me in my mail box, but also several warnings that I would be deposed if I did not log in within the 36 day timer.  Messages that I could not have seen unless I logged in, at which point they would be moot.

Somebody did not think that through.

Sadly, Jolly was away for the weekend, so we could not celebrate his ascension.  Earl was also away, which left just myself, Zahihawas and Gizalia to see what Rift had to offer in its new free to play incarnation.

The first thing was a new mount, also waiting in our mail boxes.  Veterans of the game got a shiny, ice blue tauntaun mount. 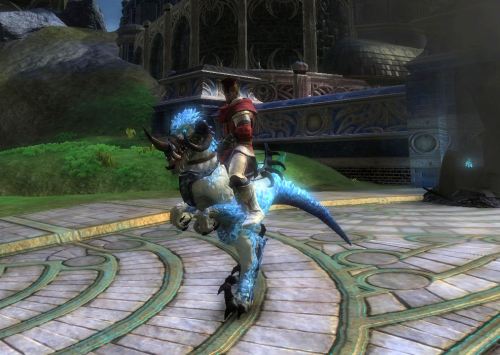 And I thought they looked bad on the inside…

After looking at that for a bit, the three of us formed up in the same location and started talking about what we should do. 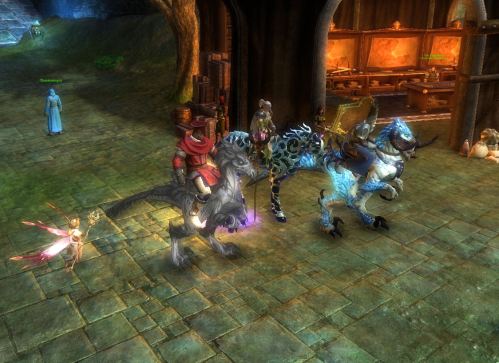 We decided on Instant Adventures more out of a lack of motivation than anything else.  And that lack began to tell as running IAs quickly became tedious.  The problem is that IAs are pretty much about getting experience and some sourcestones now and again.  But as a group, we are still waiting to get together to knock off the first Storm Legion instance.  We don’t really need any new levels and sourcestones rain on us no matter what we do, so chasing a series of “kill n rats” quests with a few strangers wasn’t really doing much for us.

So we ended up talking more than playing.  We talked about Need for Speed World for a bit, a game which Potshot and I both seem to want to like more than the game is willing to let us.

There was also a long discussion about how hard it is to stay up as late as we used to.  Back when the group started, we used to kick off at 10pm Pacific time and often did not finish up until as late as 3am at times, depending on what we were doing.  Wailing Caverns took a long time back then, and I am pretty sure the sun was not far from rising when we knocked off Archaedas for the first time.

Now we start at 9pm and people are yawning by 10:30pm.  And I am not sure how Earl does it, aside from being the youngest member of the team.  He is on the east coast, so starts at midnight.  We may need a new plan at some point going forward.

And then there was the examination of the Rift cash shop.

I am going to put a cut in before that… just because.

Here is the big plan for financing Rift going forward.

The glimpse you get of the new shop is via splash screen that comes up when you log in, and which mercifully doesn’t show up every time you visit. 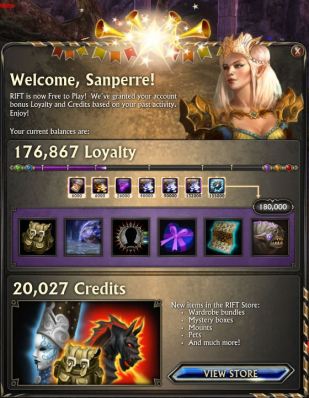 Welcome to Free to Play, let’s talk about money!

This told me I had been given 20,027 credits in what we immediately dubbed the “Lucky Charms currency” due to its candy-like green gem logo.  That amount handed me seemed oddly unrounded, like there was a specific reason I got exactly that amount, though as far as I can tell, everybody who ever subscribed got 20K in credits handed to them.

I also received 176,867 points worth of Loyalty credit, with the reason for that exact amount going unexplained.  I suspect that the number was chosen to give the illusion of some exact measure, primarily because the amount is just shy of earning a reward that seemed worthwhile when I saw it, but which I have since forgotten.  What was labeled a tutorial (but which would barely pass muster as a cheat sheet) told me that loyalty could be earned by spending money or obtaining REX, which probably means I am not going anywhere with that any time soon.

Anyway, we all had some currency to spend, so it was time to dig into the offerings.

I think the biggest surprise with the Rift cash shop… the variation that Trion has implemented in an attempt to make their shop different and more viable… is that it is not just a cash shop.  It is you all in one, anything you ever need to buy in any currency you can obtain in the sphere of Rift shop. (Hey, Liore made a video tour of the shop.) 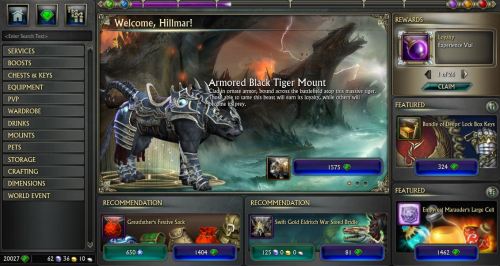 Welcome to the Rift Store

Basically, most of the vendors in Telara were made redundant.  I did not go through it with a fine tooth comb, but every time I checked on something specific… world event items… crafting supplies… food and drink… mounts…  it was all there in the Rift Store.  I did not track down specific faction items… you might still need an in-game vendor for those, but most stuff seemed to have been incorporated into the new store.  They even moved over the little “sell all gray items” button. 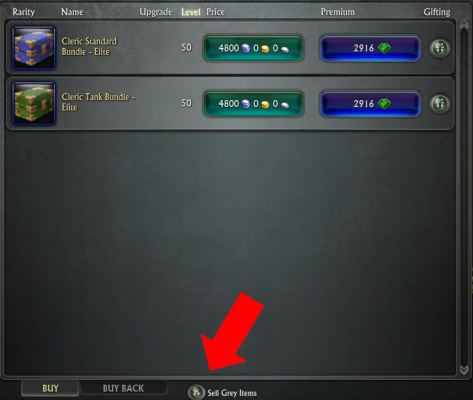 And any number of items appear as available in multiple currencies.   You can see above that the armor sets they are offered up to Hillmar, based on the fact he was a cleric in a given level range, were available in both in-game coins and Lucky Charms currency.

The store is also very well stocked, which is important.  I recall SOE rolling out their cash shop interface way back when and being completely underwhelmed by both the paucity of offerings and their sub-par nature.  SOE should have waited until they had something interesting to offer.

Of course, part of the reason the store is stocked is that they moved all the vendor items into it.  Hey, presto, stuff!

But Trion also clearly did a lot of work on items for the store, especially cosmetic gear and dimension items.  The lists for those are long, maybe even too long.  There are cosmetic gear sets and then individual items and so on.

And there is a long list of mounts you can purchase.  I do like that they have parallel purchase options for a lot of standard, in-game items.  You can spend some in-game coins for a standard mount, or you can use Lucky Charms currency if you are feeling broke.  And I always feel broke in Rift.

On the mount front I will suggest that they copy one thing from SOE, which is a cosmetic mount slot.  I went looking for mounts faster than my current best, but at the 150% speed tier, the options are all so ugly that I would rather just go slower than be seen any of them.  And what is with the angry panda mounts in that range?  Is that some sort of jab at Blizzard?

Actually, very little of the cosmetic gear appealed to me either.  Trion seems to favor a very over-wrought and bulky armor design style, while I like stuff that looks like it would actually let my character move around while wearing it.  Hillmar is still wearing cosmetic gear from very early in the game, dyed to match but otherwise mostly unchanged.  I think I update his hat once in a while.

But my tastes are always somewhat pedestrian.  I saw several examples out and about of people who bought into the Rift Store for mounts and cosmetic gear I wouldn’t touch. 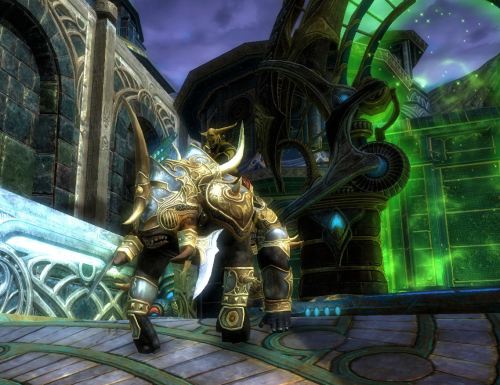 Look at my new stuff!

So Trion seems to have done well with their variation on the in-game cash shop.  They have provided both a large selection of goods and a reason to go visit the shop even if you are not looking to spend RMT currency.  I expect they will see the traditional immediate boost in revenue that comes with these sorts of transitions.  It is the happy time.  Lots of people have returned to the game, to the point that certain servers had login queues.  I did not experience that, though I am still a subscriber at this point.  I would hope that would allow me to skip to the head of the line past all you unwashed freeloaders! Hah!

Of course, here is the part where I start in about what the future portends, how the “happy time” will eventually pass and revenues will flag, and then the company in question will have to delve into the more odious cash shop practices.

But that won’t happen with Rift!

It won’t happen because Trion decided not to wait and put lockboxes and random prize chests into the Rift Store on day one! 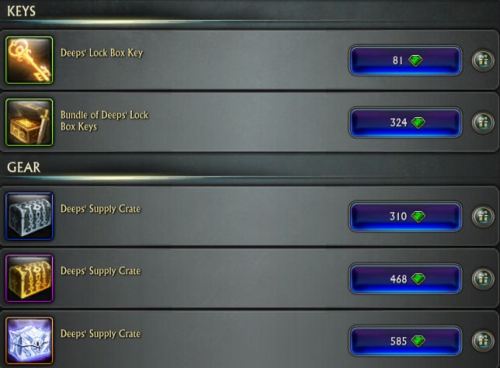 The suckers section of the store

So the end of the “happy time” will not be heralded by the introduction of such items.  I suspect that when the time comes, we will start to see pop-ups pushing the Rift Store and promotions for special items that will only be available through random means.  We shall see.

But that is in the future.  Right now it is the “happy time,” and the game is booming and all looks well in the once again crowded world of Telara.

Have you been back to Rift to scope out the free to play options?  What do you think about the Rift stores?  Is having what adds up to access to most vendors all the time a good move?  Did I miss any really good/bad aspects of the store?

10 thoughts on “Meeting Up in Rift After the Big Change”