Last night I had a chunk of free time so I was hoping I might see some fleet action in Fountain.  I had Jabber up, I was logged into the game, I was ready.  I had ships outfitted for most of the popular doctrines, including a couple of new stealth bombers configured for siege fleet.

There had been some action since earlier in the week when I last checked in.  The CFC managed to take and hold 9-VO0Q, meaning that my map of North Fountain has to be expanded some to show TEST systems that are now on the front line.  So the war continues on.  The CFC now holds 11 of 115 systems, if that is your preferred metric for the war. 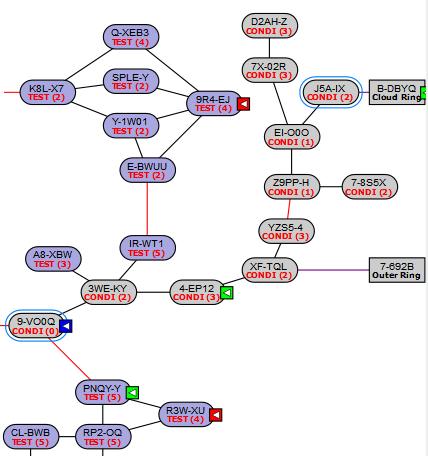 At the time, however, there was a whole lot of nothing going on.  So I put EVE Online in the background and resumed my latest game of Civilization V while I waited.

This time around I took up the banner of Venice, which has some interesting attributes.  It gets some boosts to trade and such, in keeping with the Venetian tradition.  But it also cannot create settlers.  As a civilization it has to grow by other means.  Conquest is one I suppose.  But you also get a “Merchant of Venice” great person every so often who is able to go buy off city states, which turns them into puppet regimes.

That can be a slow process however.

I also decided to go full on for a cultural victory in an attempt to learn how the culture and tourism changes worked.  It is not as easy or clear cut a path as it was before the expansion.  Tourism is a key way to spread your culture, and that is driven by how many great works and such your society has.  It is also driven by other aspects like open boarders, trade, and shared religion and ideology.

By the way, I want to reiterate what I said previously about liking where trade has gone with the new expansion.  In addition to commerce and science, it also spreads religion and plays into tourism.

I do not think I am going to get the culture victory this time around.  As I said, getting there is no longer a simple and direct path.  But it has lead to some interesting turns.  Arabia, for example, is complaining to me that all of its teens are wearing blue jeans and listening to Venetian popular music.

But the best moment was when Germany, who had been friendly up to that point, suddenly stabbed me in the back.  It went from open boarders, declarations of friendship, and trade caravans to the drums of war.  This was trouble, as Germany was the most largest and most aggressive empire and was probably peeved at me for failing to join it in its conquests.  I was technologically ahead of Germany and could hold out for a bit, but Bismark could overwhelm me.

And then, one turn into the war, two German cities defected to my side causing Bismark to sue for peace, saying it was high time to end this horrible conflict..  The cities in question apparently preferred my ideological choice of Freedom over Bismark’s Order choice.  But that situation brought back memories of one of the things I liked about Civilization III.

All of which was interrupted by a call for a Megathron fleet. 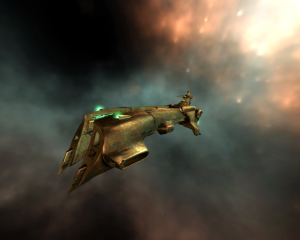 Megathron, circa 2007, just because

TEST and pals were reported to be putting together a Prophecy fleet and we were called up to counter and/or murder them.  Or at least to keep them busy while a CFC capital fleet roamed Fountain putting things into reinforce states. 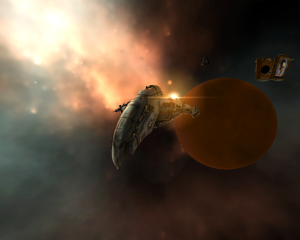 That is my latest screen shot of a Prophecy… at least the latest one I have taken.  I certainly did not get a chance to take any new screen shots of one.  But I am not sure it has changed as much as the Megathron has over the years.

Anyway, EVE was back in the foreground and full screen as we assembled and loaded the ammo and scripts as directed by our FC, Lazrus Telraven.  We jumped out of the B-DBYQ staging system and holed up in a POS in Fountain to wait.

It was reported that TEST called off their fleet, then changed their mind, and then changed it again a couple more times.

So we sat on station in the POS as a ready reaction force.  I put EVE back in a window and pulled up Civ V again to continue my campaign there.  Laz talked people into playing what has become the favorite game of the CFC high command since it showed up on the Steam Summer Sale, Chivalry: Medieval Warfare.  It is a first person shooter done up in the age of swords and armor… so if Diablo III in the first person perspective was on your to do list, here is an opportunity.   The game has popped up a couple of times during the sale for as low as six dollars.  I was tempted to join in, though it would have taken me longer to download the game from Steam than people ended up sitting around playing.  Maybe later.

So voice coms turned into cries of joy and pain and amazement as swords sang, arrows loosed, and heads rolled.  And fleet chat idled a bit, with occasional links to videos or more propaganda from the war, including one of my recent favorites.  I love the little Pandemic Legion logo on the bomb.

I am not sure that it needs the intro lines.  In fact, I think it works better without them.  But that is the way it is being spread about. (Some new TEST propaganda here.)

There were a couple more false alarms, reports of a TEST bomber fleet failing to catch the capital fleet, and some moving about the system to chase off a gate camp, but otherwise it was a quiet night for our fleet.

Eventually Laz gave us a participation link and flew us all back home to B-DBYQ. 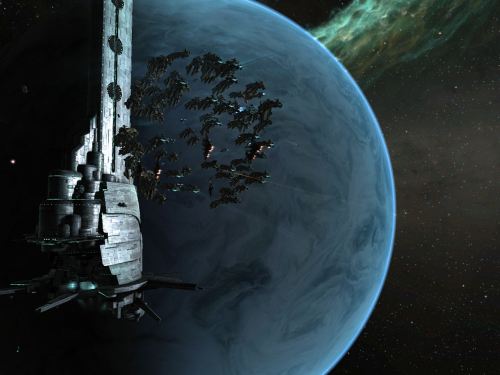 We also serve, who only sit and play other games.

And so goes the war in Fountain on a Thursday night.

8 thoughts on “And Quiet Flows the ‘Thron”