Since this past weekend the CFC has been “alarm clocking,” which is to say, fighting in what would otherwise be non-peak, working or sleeping hours for US and EU time zones.  The war has moved on to Australian time.  Ops have been planned for 08:00 UTC/EVE Time, which is 1am for me, which is too late for me to start anything on a weekend when I can sleep in, much less on a weekday when I have to get up and to go into the office a mere five hours later.  I am starting to yawn by 21:00 my time.

So I must salute those who have been making these fleet ops, which includes a number of the key fleet commanders.  They have made significant progress on the sovereignty front, and every morning when I wake up and check DOTLAN maps, TEST has lost sov in even more systems.  Last week I was able to sum up the CFC progress with a little map segment from the north end of the region when writing about our new staging system.

And we were happy to have that.  It proved our staying power and the slow and steady pace became our watch words.  When you are on the defensive, as TEST has been, you are losing if the enemy still holds your territory, and we certainly hadn’t been kicked out yet.

Today I have to drag out the whole region map to display all the systems turned in the last few days. 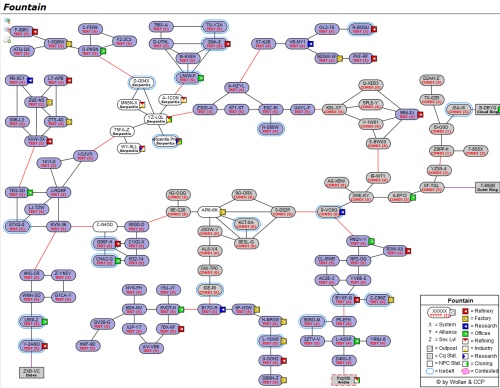 That is a pretty dramatic change in just a few days, TEST having lost sovereignty in a quarter of the 115 systems in Fountain, and one that should keep the not winning fast enough comments under control, at least momentarily.  Compare the Fountain system changes for June, where TEST and pals were pushing back hard and there were systems changing hands multiple times, with the Fountain system changes for July, which has been a constant theme of TEST loss and CFC gain so far.

There have been updates from The Mittani on CFC progress.

Of course, the balance of power has changed recently.  Northern Coalition, according to their recent state of the alliance, has been back in the east of null sec to fight the resurgent Russians of SOLAR FLEET, bringing Pandemic Legion along with it.  And NC has been strong in the AUTZ for a while now.  During the war in Tribute last year, one of the things we had to overcome was there ability to operate and dominate in that time slot.  There was an active recruitment effort on our side for what was dubbed “Arsehole Squad” to counter this. (And advantage the Goons have with their numbers is that, when there is a specific problem, they can form a special group, and fill it with qualified people, to deal with it.)

I am not sure we ever overcame NC dominance in that time zone, but we were able to make things annoying, which in the end made NC walk away from the region because the war had ceased to be fun and the threat of a hellish sov grind loomed.

So when it came to Fountain, NC was again able to use that time zone to their advantage.  The time zone war kept both sides in check.  But with NC out of the picture for the moment, the CGC rushed in to take over that time zone, which has lead to TEST losing systems and their allies in Tribal Band pleading for participation from its membership.

How long will this last?

If we are going to continue torturing the D-Day analogy in an attempt to apply it to Fountain, then the first part of the war was the bloody fight for Caen and Villers-Bocage.  At the forty day point we had only secured a foothold in Fountain.  Now we seem to be in the breakout and mad dash for across France for Paris, though I am not sure what system in Fountain would qualify as Paris.  Heady times and big gobs of territory being taken.

And while that was a great victory, a lot of hard fighting remained in the war after that.  Likewise, while we have made many gains, NC will be returning to Fountain at some point.  If nothing else, it is the only real war they have, given how they appear to be driving back SOLAR FLEET.  And if they are serious, we will be back to fighting and time zones and shooting SBUs and the slow grind of such things.

And the war in Fountain will continue.