The work in Delve goes on.

Even without opposition on timers or any real attempt to defend any given system, the conquest of Delve is taking some time.  The call went out a bit more than a week ago to move down to 1DH-SX, at which point almost every TEST system had been SBU’d, and the map is still covered with TEST sovereignty.

It isn’t as bad as it looks when glancing at the thumbnail above.

For whatever reason, the otherwise awesome EVE Maps at DOTLAN chose to use slightly different shades of yellow for TEST, GSF (CONDI), and Paisti Syndicate (PSY), the latter being in the “where did they come from?” category.  So, when systems change hands and the map updates the system color from #FFEE66 to #FEFF7F, it isn’t always obvious.

But there are still a lot of TEST systems holding on in Delve.  This is because sovereignty warfare is a grind.  Take a look at Poetic Stanziel’s post about Fweddit, a “small” alliance composed of about a thousand pilots and their struggle to capture just four systems in Delve unopposed.  It takes a pile of time even when nobody is contesting the timers. (And lead to a request for some improvements.)  Remember that next time somebody says, “Not winning fast enough.”

Meanwhile, when I say that there is no opposition, I mean from TEST.  They are not defending their sovereignty.  However, Pandemic Legion has deployed into the neighborhood looking for fights, as they were last Saturday night, so there is danger out there.  More danger than there would be with just the typical null sec “drag bubble and gate camp” crowd.  And PL would love nothing more than to catch some capital ships, so the dreadnought fleet has been somewhat scarce of late.

Which leaves us with Siege Fleet as the primary doctrine for the sov grind.

Siege Fleet is built around the stealth bomber, which is a fragile little frigate that can carry a few battleship sized weapons.  Each faction has their own version, but the Caldari Manticore and the Minmatar Hound seem to be the favored models.

Stealth bombers are cheap, have decent firepower, and can mount, then move and warp with a covert ops cloak.  In Siege Fleet the traditional bomb launcher can be removed since you have to stuff your cargo hold with as many torpedoes as you can, since for sov ops, you fire, reload, fire, reload, and so on for long stretches.

You add in a couple of blockade runners as ammo trucks to carry reloads for the bombers, a couple of black ops battleships like a Redeemer or a Sin, which can mount covert cynos and a covert jump portal generators, and you are ready to go.  You have a fleet that can jump around at will, shoot structures when nobody is around, and stealth up and fade away when hostiles show up.

As pretty as Sin

I have a Manticore fit for such a fleet, though I have never taken it out on an op.  It is still sitting up in 4-EP waiting for me to drive it on down to Delve.  And I haven’t done that yet because… I am lazy.  I’ve been down the pipe with a Megathron (Baltech Fleet was deemed a priority when we were told to move) and a Harpy (because this seems to be the current favored defense fleet) and haven’t been really keen to make the run again.  Lazy.

Fortunately, the logistical and/or ISK driven arm of the CFC is starting to catch up.  Siege Fleet fit stealth bombers have been showing up on contract in 1DH-SX, so I was able to grab a Hound the other night.  So while Potshot has been trying his hand at the supply side of things, not being trained up for a stealth bomber yet, I was able to join my first Siege Fleet op last night.

Siege Fleet ops get called all the time.  Last night they ran almost continuously over an 8 hour stretch of time that covered late Euro prime time to late US prime time.  And they might have run before and after that.  That was just when I happened to have Jabber up.

The fleet follows a lot of the standard patterns.  There is the usual form up in the POS, though unlike with a titan bridged fleet, we’re allowed into the POS and nobody is too concerned about bumping the titan.  (I MWD’d right into the Redeemer black ops at full speed because I was worried I might miss the bridge, which earned me a “Nice tackle on the Blops!” in coms.  Yeah, yeah, keep at range, do not approach.  I was in a hurry.)

Assembly in the POS

Then there is the bridge out which, if nothing else, consists of a different range of colors. 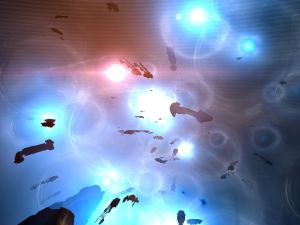 And then you run out of ammo and head to the can that the ammo truck drops off in order to refill your hold.

The ammo truck drops a can

And then it is back to shooting.

Last night I was lucky.  We were hitting some timers that actually finished off an infrastructure hub, which generated a kill mail.  Go me.  Often times you go out and shoot things into reinforce and then just move on to the next target.  Structure kill mails aren’t golden, but at least you feel like you got some credit somewhere.

We shot that.  We shot a station.  PL showed up with their own fleet and we faded away to pop up in another system to shoot another target.  At some point along the way I cloaked up, moved off, and went and had dinner.  Then I managed to rejoin the fleet for a bit more shooting.

It is not a thrilling time.  The FC has to keep reminding people to keep shooting, as the temptation is to alt-tab out of EVE and do something else.  But your launchers won’t start shooting again after an automatic reload until you press the magic button.  Even coms reflect the reality of the situation.  It tends to be quiet as we’re all off in another window and only peeking in once in a while.

But the powers that be appear to be well aware of that.  A new participation link gets generated every so often so that the you, your corp, and you alliance get additional credit for helping if you stay with the fleet for a long stretch.  And the whole op is run in an “easy in, easy out” way.  Calls to join go out regularly on Jabber.  When you log in, if the fleet is already out, you just go sit on the black ops battleship in the local POS until some people pile up, at which point they will bridge you out to join the fleet.  Every once in a while they will bridge people back who need to leave with the black ops battleship that travels with the fleet.  If you need to step away, you are in the perfect ship to do it.  You can just move away, stealth up, and be about as safe as you are anywhere in space when it comes to EVE.  And if worse comes to worst, you are in a stealth bomber, you can fly back home on your own with about as high a chance of survival as any ship, if you take care.

And there are plenty more targets for Siege Fleet, so I expect the call will be out for stealth bombers for some time to come.

The joy of null sec sovereignty.

Here are a few more screen shots from my time out with Siege Fleet. 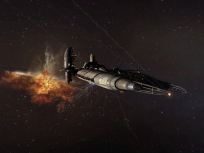 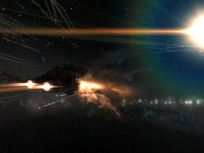 Hound shooting an I Hub

Scamble for the ammo can

4 thoughts on “Out With Siege Fleet in Delve”