Saturday rolled around and, for a brief period of time, it looked like we might have the whole group online.  Everybody reported in.  So we had to figure out what to play.

By default, all five of us online should mean Rift.  However, Rift seems to be fading from the interest of the group.  Plus, by the time we were about ready to get into a game, we found out that Mike has only patched Neverwinter, so that seemed to dictate the choice.

Of course, I had been playing WoW all afternoon and hadn’t bothered to patch anything, so I had to hurry up and get the Neverwinter patcher going.  Fortunately, it seemed to be pretty efficient and I was able to get half a gig of updates secured without delaying the party too much.

Then I got on and there was no Earl.  He was not responding to pings, so the guess was that he fell asleep.  After nearly seven years of the group, none of us is quite as able to stay up late as easily as we once were.  And with Earl on the East coast and starting at midnight… well… it is understandable.  We might have to look into a Sunday brunch instance group at some point.

Anyway, there were four of us, my level 6 rogue, Potshot’s level 10 guardian, Mike’s level 10 cleric, and Ula’s level 23 wizard.

That did not seem like the ideal group.  Clearly one of us is much more into the game.

We got Ula to trade out for a level 12 rogue and then started poking around for something to do.

Potshot went to the Foundry listing and started looking through the recommended and highly rated modules in the hope that we would draw something better than our last attempt.  He found a likely candidate that was chapter one of a series, shared it with us, and off we went.

More words along with pictures after the cut.

Well, once we got together to the same gate and in the same instance of the zone we were off.  It is ever the trade off, you can either limit server/zone size thus dividing your audience or you can spawn instances of the server/zone to accommodate more people, only to have them not see each other.

Anyway, we were into the woods on a new adventure.

The start, however, was somewhat unpromising.  We were immediately faced with a merchant outside of an Inn who seemed reluctant to speak to us.  He had something to say about the woods and then clammed up until we hit the point in the dialog where we had to beat him up and kill his henchmen.  After that he wasn’t speaking at all, leaving us hanging. 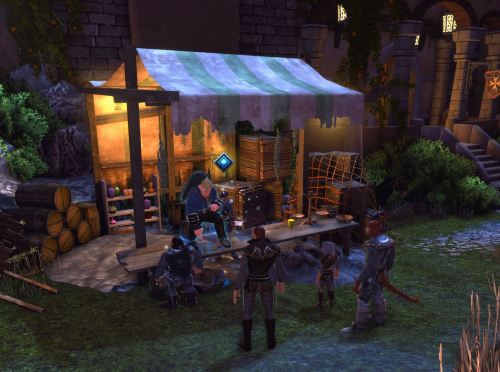 Not talking, this one

So the merchant just sat there on his counter while we hemmed and hawed and wondered what to do, since he really did not give us any leads, just a bit of color and back story.

Then we were struck by the idea of maybe entering the inn, since not much was going on outside.  I know, how likely is it for a D&D adventure to get started in an inn, but we were willing to give it a shot.

We were soon fighting in the bar area!  And, following that, we were sent along a path into the woods where evil lurked. 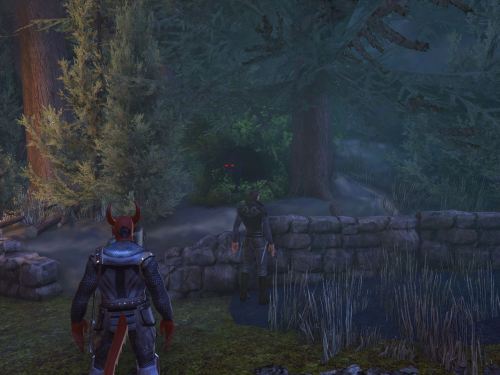 See, it is lurking right there!

We fought our way along a winding path, confronted a grave robber, searched for materials to break through a locked gate, and ended up defending a small town from an onslaught of undead.  And while bits of the whole adventure were clear, unambiguous “go talk to Jerry, he’ll point you at who to slay,” there were a number of points of ambiguity where we had to actually stop and figure out what was going on.  Imagine that!

We finished up the first chapter and tried to make the “in module” transition to chapter two, which failed miserably and required us all to quit the game and log back in.

That did solve our problem and we were able to get back into game, get together, and rejoin the adventure already in progress that lead us to another part of town to a church and a graveyard with plenty of foes along the way.  There were fights and a simple jumping puzzle to get to the church, and once inside we faced a possessed priest and another non-obvious obstacle problem.  We fell through the floor and had to find a way to get back up and take care of business. 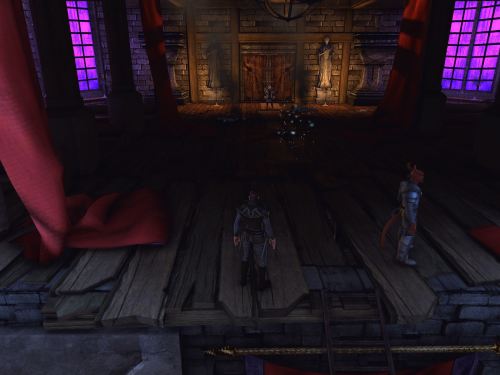 The it was out the back door of the church and into the graveyard, where we naturally found undead as well as a few allies. 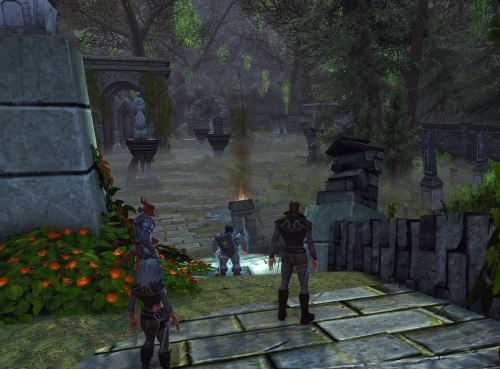 Looking for the undead

That was another fairly simple set of tasks that lead to a big end fight, but the atmosphere was good and, aside from the author mistaking “east” for “west” in one of the quest cues (though the “follow me” arrow knew better) things and a few horrible gravestone inscriptions (believe me, I know them all), things went well and we were able to light the final brazier, cleanse the area, and finish up chapter 2. 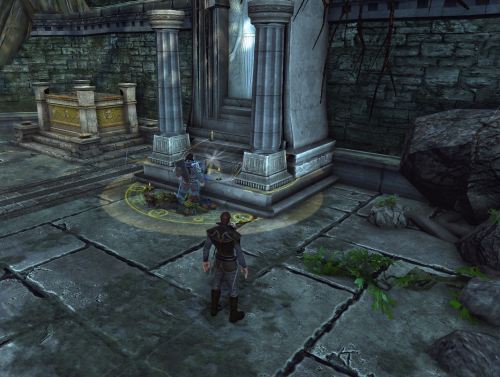 Potshot does the honors

At this point we found that there was no chapter 3 available.

But, what we saw up to that point was really about all you could ask of an end-user created module done in the “choices and paths must be limited” environment of a computer based role playing game.  We couldn’t deviate from the path, but the path was made well enough that we were content to be herded.

And in some cases, it was literally how the path itself was approached that made a difference.  We didn’t walk a straight path from point A to point B, where you could pretty much see point B, when asked to travel .  The author obscured the path forward with actual bends and hills and a gate or two.  We did not travel any further than we might of in another module, but it felt right.

I also have to applaud the methods used to slow things down and to stop and make us wonder what we really needed to do next.  Things were non-obvious, but not obnoxiously so.  While the quest noted that we, for example, had to find a way to get back up to the altar in the church, things were not dropped immediately in our line of sight.  And once we found a ladder, where we had to go and how to use it took a bit of trial and error.  Much better than the foliage disaster we encountered last time around.

And this was all set off by the environments that the Foundry lets players work with.  The look of things is really top notch. 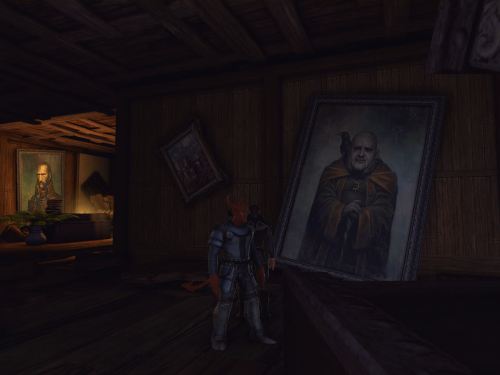 Hanging around the church

I actually want to go back and take another look at that module, just to examine it further.

Except, of course, I forget what the two modules were called and Neverwinter does not seem to want to show you what user content you have played through or what modules you have reviewed.  So it is somewhere out there, I just have to find it again.  I know the modules start with “CH1” and “CH2.”  Unfortunately, that does not make them unique.  The same old problem with online content, how do you find it in the first place and, once you go away, how do you find it again?

So good times.  And while time was moving along, it wasn’t quite late enough to call it a night.  Ula was tired, but the rest of us wanted a bit more.  Since Ula was already ahead in levels, she logged off while Potshot looked for something suitable for our mood, a bit of an after adventure drink to finish things off.

He came up with a module called “The Crucible Challenge.”  I wrote that down lest I forget.

The description basically said that if you were looking for story or a dungeon crawl, this wasn’t going to be your cup of tea.  Instead, this module was a series of fights to work your way through.  It sounded like it met our time requirement, so we dropped in and accepted the challenge. 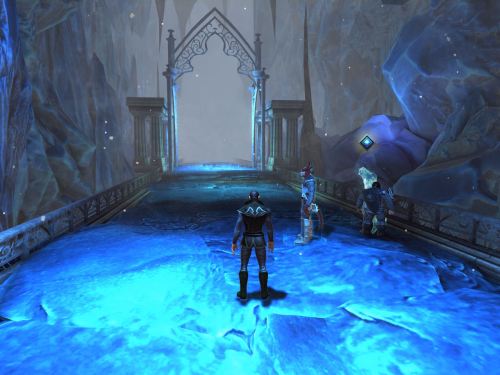 Forward to the crucible

And, given what it was attempting to be, it was pretty good.  As a group we moved through a series of platforms, each of which represented a challenge.  We could add companions if we felt we needed them and there was a campfire/healing point before each challenge, so you went in fully charged and ready to go.

A boss slain at the end

It worked.  We made it through.  There was some loot.  We had some good fights and saw some interesting models.  My own character was up three levels for the night and better armed.

So things ended up better this time around, though the question of whether we can depend on such luck does arise.  And my usual problem still remains.  Or all the games I have available to play, Neverwinter still doesn’t rank up high enough for me to ever get to it except when we go as a group.  So I suppose it will be a slow process of leveling up into more content.

6 thoughts on “Neverwinter – The Foundry Comes Through”