I gave up trying to track the status of the EverQuest time-locked progression server Fippy Darkpaw about a year back.  Basically, I had long stopped playing on the server and keeping track of how things were moving along became increasingly difficult.  The server timeline, still linked on the EverQuest web site, has been broken since the game went free to play on its 13th birthday.  And SOE has shown no interest in promoting the server since the run up to its launch, so they never mention any change on the server ever.  I speak as someone who has subscribed to every SOE new channel he can find.

I was depending mostly on the forums, since each unlock appeared to have problems and would, thus, generate forum posts.  But SOE eventually fixed that as well, reducing forum content to bug complaints, demands for new classic and/or progression servers, and requests to merge/not merge the Vulak server, which is dead/just fine, with Fippy Darkpaw.  The dearth of timely news made me give up my quest to actively cover all updates and expansion unlocks.

However, once in a while a nugget of information still shows up unbidden.  For example, the good people at FippyDarkpaw.com, an external site devoted to the server, recently posted this update.

Expect the vote to open on Monday.

That means that The Serpent’s Spine is on its way out and the EverQuest pirate expansion, The Buried Sea, will likely be unlocked very soon, featuring a meaner, more scantily clad Firiona Vie. 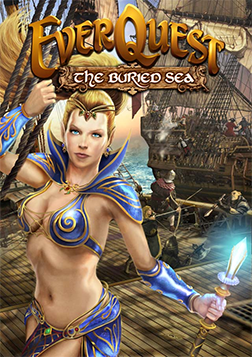 The Fippy Darkpaw server is now returning to a time when I was actually playing EverQuest again, during what I guess I would call the age of Norrathian nostalgia.  I came back for The Serpent’s Spine, which was new so not really nostalgia I guess.  But it was a return to the old world.  And in the classic nostalgia pattern for me, I played for a bit and then went back to greener pastures.  So by the time The Buried Sea came out… which sounded suspiciously like Pirates of the Burning Sea… we were playing Lord of the Rings Online.  But we were talking about Pirates of the Burning Sea.  And The Buried Sea sounded nothing like that.

Not the EverQuest version

The Buried Sea came out during the end of the “twice a year” frantic EverQuest expansion cycle and was aimed primarily at those who were already high level and invested in the game.  It featured, if I recall right, a lot of faction work along with some new currencies and represented something of a “things to do” side path opposed to an evolution of the game.

With that, and a couple other updates I gleaned from the site, I was able to update my list of events for the Fippy Darkpaw server.

After The Buried Sea, there are only four more expansions on the list, as the timeline graphic only showed things going out to the House of Thule expansion.

We shall see.  Updates here when and if they become available.

2 thoughts on “Fippy Darkpaw – Pirates on the Horizon”