One of SOE’s big EverQuest II free to play fiascoes was, in my opinion, getting themselves in a position where they had to stop selling expansions and subscription time because they had devalued their RMT currency, Station Cash, so badly.  As the big chart over at EQ2 Wire showed, if you timed things right you could have ended up paying as little as $1.25 a month for a Gold level subscription back in the day.

So all of that clearly had to go, leaving me with the big question about what to spend all my Station Cash on.

Well, there was a change on the expansion front today as a new Producer’s Letter announced that SOE would begin selling the Age of Discovery expansion for Station Cash.  You can buy it as one big bundle for 4,000 SC, or as individual pieces totaling up to 7,000 SC.

According to the Producer’s Letter, the Age of Discovery expansion will cease to be sold for anything besides Station Cash as of October 1, 2013.  However, The Chains of Eternity expansion, and the upcoming Tears of Veeshan expansion, however, will require some real world money to purchase.

Still, this is actually something of a big step for their cash shop as it gives players something substantial to purchase.  I know some people love mounts and cosmetic gear, but it is nice to have something with some “heft” to it in the shop. 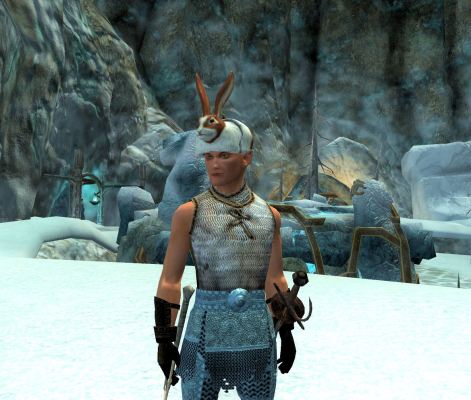 My only cosmetic purchase, a bunny hat

In addition to that, and something that might actually get me back into the game to spend some of my Station Cash, it was announced that both Free and Silver level accounts would no longer face gear restrictions.  So when I go back to take a look at EverQuest II, my first in-game alert won’t be about how my character can’t wear his currently equipped gear.

This seems to be part of an ongoing loosening of the free to play restrictions on the game.  Previously SOE removed the restrictions on races and classes (except for the Freeblood vampire race and, of course, the Beastlord class) and has tinkered with things like bag slots before.

In turn, in order to set Gold level accounts… the classic $15 a month subscription option… apart from their lesser brethren, SOE will be boosting coin loot by 15% and mount speeds by 10%.  The former sounds okay, but mount speeds are already almost terrifyingly fast at this point, does anybody really need another 10%?

All this goes in place on October 1, 2013, along with a new Station Cash item that will boost your character 280 AA points.  Add in the whole Try and Buy a Heroic Character option and it seems like the EverQuest II team has been busy stirring the pot to get more people back in game.