There was a post up on the alliance forum last week that started the job of tackling the great question of, “So, what’s next?”

Where would we go?  Who would we battle?

After a nice long summer of invading Fountain that finished up with a… hrmm… relaxing I guess… wrap up in Delve, it was time for something different.  And while we were okay with Goonswarm providing the main focus of entertainment for a season, it was time to strike out on our own.  We were going to do our own deployment.

In anticipation of this, new fleet doctrines were announced.  While these new doctrines didn’t go for the throat when it came to any skill deficit I might have… that would have required laser fit Amarr battleships I think… they did seem to pick fits that forced me to clone jump back to high sec for a few skills.  Life in New Eden.

I couldn’t quite fly the Talos

But there was the promise of adventure.  The Goons… well, they could run off to Curse to go sit on TEST with their drone-assist abusing Prophecy doctrine and their new and completely unironic Ferox doctrine… but we were having none of that.  We waited for the word on where we would be going.

And last night we were finally told.

We are going to Curse!

But we’re totally not going with the Goons.  No.  We’re going to be a couple systems over and we will have incompatible fleet doctrines.

Well, it won’t be as bad as all that.  We won’t be completely incompatible with their fleet doctrines.  Everybody is showing up with Harpy fleet.  We all love Harpy fleet.  And both groups are dead set on proving something with Eagles.  I don’t see the appeal… if nothing else it is one of the more awkward looking hulls in the game.. but with just one skill I was able to fly the doctrine.  And, I suppose we don’t fly ships based on how they look.

Which is more like a goose than an eagle

However, judging from the way Jabber has been popping tonight, the Goons are seriously trying to prove that drone assist needs to be nerfed by flying their Prophecy doctrine as often as they can. Dominixes and Prophecies are all over.  And we’re not supposed to be bringing those.

Nor are we going to have unironic Feroxes.  And I am sort of pissed about that, because in playing this game for seven years, the Ferox has never be the right answer to question, “What should I fly today?”  And I would like to be there for the no doubt fleeting moment in EVE history when it is the right choice.

Yes, yes, some bitter vet will show up to tell me that the Ferox was the big thing between the Exodus and Cold War expansions or some such, because that is what the internet is for.  But it doesn’t matter, I want them to be useful in my time.  And I need a more recent screen shot of one.  I couldn’t find anything later than 2009 in my files. 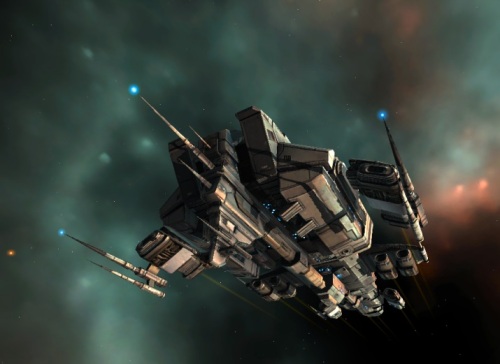 Maybe I can sneak out on the deployment.  We’ll see.

And, really, it isn’t as bad as all that.  If I understood the briefing correctly, Curse has become something of the region of misfit alliances.  It is sort of a thunderdome for the fallen, the opportunistic, and alliances in adjacent regions.  So we’ll have plenty to do.  There will be shooting.  And we’ll have some allies up the road.

It is like going to summer camp and all your pals are just across the lake while a bunch of kids you don’t like are in the cabin next door.  Or in your cabin.  Or something.

No, the troublesome thing about this deployment will be the move.  If you had to pick a location as far from my “stuff” as possible in New Eden, Curse would not be an unreasonable choice.  Let me illustrate with yet another map I swiped from DOTLAN.

Looking at the map, I have concentrations of ships in Deklein, Fountain, and Delve.  Deklein is home, while Fountain and Delve represent what I had stockpiled over the summer deployments.  Curse is… well, not very close to any of it.  Nor is it near any of the regions of null sec owned by the CFC, which are highlighted in yellow.

You might ask, “So what?”  That just means it will take a little bit longer to get stuff out to the front lines of the deployment.  Suck it up.

Well, the other aspect of this deployment is what stands between us and our new base of operations, which is a lot of people who who are not necessarily our friends.  The thing about deploying to Fountain and Delve was that we were moving through nominally friendly territory with a jump bridge network and intel channels to support us.  They were, in essence, interior lines of communications that we used to deploy to the frontiers of our empire.  We ran regular convoys at the start of the war and during any major relocation.  And even then the route was camped and people were waylaid on the route to the front on a regular basis.

People camp gates even if you believe in this

Now we will be deploying through hostile territory or low sec, into a region full of hostiles, which will be a new experience for me.

As is usual, there will be convoys at the start of the deployment.  But that tends to end pretty quickly.  I usually bring the essentials during the convoy ops and then try to sneak things in later on by myself or in small groups.  I am not sure how viable that latter strategy is going to be.  And then there is the longer term question of supplies and replacement of the inevitable losses.

Anyway, it will be a new adventure in null sec.  We shall see how it plays out.