Sir Robin, moments before his demise at the Bridge of Death

I have this tradition in games… and especially in MMOs… where I will stumble upon something that should be difficult, or at least challenging and time consuming, and completely through luck and ignorance, get through it without realizing quite what I have done.

I end up thinking what Sir Robin was thinking, that whatever happened was easy.  And then I go and try it again and get pulverized because the task is not easy at all, I was just extremely lucky.

This has happened often enough in my gaming career that I try to allow for it.  I assume that just because something was easy the first time, it isn’t going to ever be that easy again.  Especially if there was risk involved.

And so it was with the convoy op into Curse the other night.  We took a winding route into the region, ran into no trouble, saw no hostiles, and generally just went from gate to gate without issue.  Likewise, sneaking my alt into null sec late last month seemed to go flawlessly, much to my surprise.

So, in some combination of a thirst for adventure, a desire to prove that was all a fluke, and a flat out need to tempt fate, I devised a plan almost guaranteed to end in disaster.

I decided to jump my main and my alt back up to Deklein, pick up a couple of ships, fly them out to high sec, cross high sec, then fly them back into low sec, arriving down in Curse ready to fight.

Given my optimism, lack of caution, and general impatience, this seemed like a sure fire way to end up podded next to the wrecks of my destroyed ships.

I couldn’t even wait to get started.  Throwing away my US West Coast evening time advantage… Europe is pretty much fast asleep and the East Coast is headed to bed when I am getting on and playing on a week night… I jumped right into things when I got home from work.  I jump cloned both characters up to Deklein, picked up ships, and headed for high sec.

Now, I wasn’t a complete fool.  I put my main in an Eagle, one of the doctrine ships we need down in Curse, but I put my alt in a stealth bomber so he could scout ahead and attempt to mitigate my death wish.

I also did not head straight to high sec via the shortest path, which would have run me through EC-P8R, a system so active and so frequently camped that it has its own CFC intel channel.  Instead, I had noticed on the runs to Fountain via the jump bridge network that there was one system on the route that adjoined low sec space.  Because of its position, it tends to be the system along the way most likely to be camped.  But when nobody is there, it is probably a good place to make the transition and leave all your warp bubble worries behind. (None of those in low sec.)

And it actually worked.  Nobody was in system, so I jumped into low sec and through a half dozen Gallente/Caldari factional warfare systems that were occupied, but the gates were clear, and into high sec.

I was past the first stage.  Now I just had to toddle along down to Metropolis to hole up in a station that was to be our jump off point for the transition back into null. 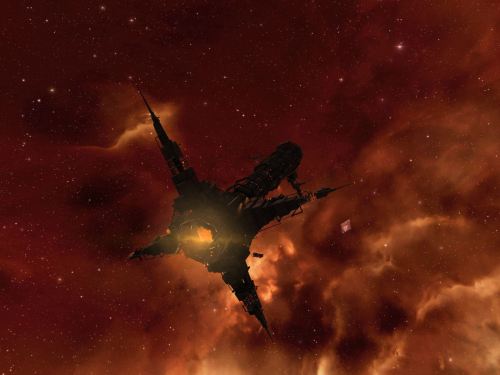 Land of the Minmatar gates

And when I say “We,” I include Potshot.  I had somehow sold him on the idea of traveling to Curse with me via my special route.  That would be later in the evening though, after dinner and into the end of the US weekday prime time for EVE.

We met up in space after the sun had gone down.  I had my Eagle on the gate that lead into low sec and was pushing my alt out to the first null sec system to scout. 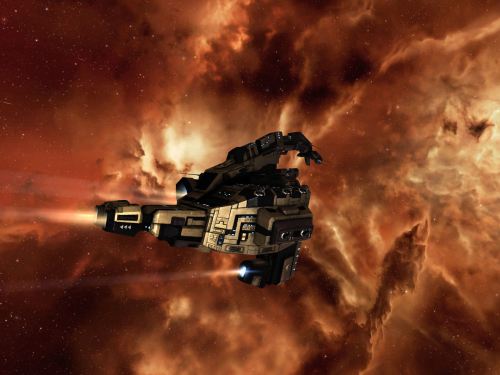 First flight in the Eagle continues

Potshot was bringing a Viator loaded with a couple of Harpy hulls along with modules and and ammo to fit them out.  Because if you’re going to get yourself killed, you might as well build the biggest funeral pyre you can.  I had even told him that I expected that this operation would end in disaster and that it was likely that I was subconsciously trying to get us killed just so I could write a blog post about it.

But he stayed in our little fleet all the same.  He seemed to be eager to get out of the vast ambiguity of high sec, where he was starting to feel like reds were following him around, and into the binary simplicity of null, where you at least know who your enemies are… unless the overview bugs out again.

We made our way through a couple of low sec systems and into the first null sec waypoint on our journey.  Alea Iacta Est.  The die had been cast.  We were on our way.

And, almost immediately we ran into trouble.

There was only one other person in the first system, but when we jumped to the exit gate we got caught up in a small warp disruptor bubble.  “Here we go” I thought, “He’ll have pals on the other side of the gate to jump through and catch us or something.  The Viator and the Manticore were already on the bubble, though still stealthed, while the Eagle was in warp to the gate because I am impatient.

However, when the Eagle had landed… and I didn’t even make that joke at the time… the hostile on the bubble decided that his Harpy wasn’t up to the task and warped off.  I shot up his bubble with the Eagle while sending my alt through the gate to get eyes on the far side.

The far side was all clear.  So we all piled into the next system and began moving forward, trying to be careful.  All was clear, jump after jump.  We got sloppy.  Potshot ended up jumping ahead a couple of times, despite being the most valuable ship in the convoy.  I tried to keep the Manticore out front. 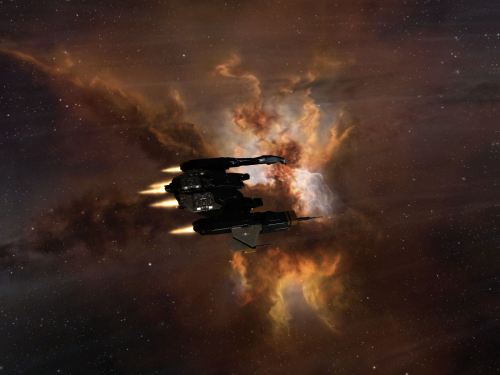 We had to stop on gates a couple of times to let the Eagle catch up, since it was much slower to align and warp than the other two ships.

The Eagle looks slow no matter what

You can even get a sense of our course in those two pictures, as we appear to be zig-zagging across that same nebula.

On we went through the strangely desolate Great Wildlands region.  I am going to guess that it is the almost complete lack of stations in the region that keeps people from hanging out in it.  That and it is pretty sizable and has multiple paths through it.  Curse, an adjacent NPC owned null sec region, is a war zone, a blood bath, but also has a large number of stations relative to the system count.  The Great Wildlands seems designed for quiet.

But it worked for us.  Soon we were into Curse and just a jump away from our waypoint in the region, G-0Q86, home of the ongoing Goon/TEST struggle.  I got us all in the safe POS and we started looking at the final leg of the journey, the run to the TNT staging system.  However, G-0Q86 is like a circus, with things going on all over all the time.  There were some gate camp shenanigans going on at our out gate.  And while Potshot and I were able to get the two stealthy covert ops ships through, out of a bubble, and on our way, the Eagle seemed like a dicey proposition.  I went and parked it in the camped and bubbled home station of both TEST and Goons.

Center ring in the circus

Potshot and I landed in our new home station.  He called it a night at that point, but I felt like I had a task left undone.  So I hauled my alt back out to the gate to G-086Q and got eyes on it while I moved the Eagle back out to the safe POS.  When the gate camp clowns got distracted and ran off after something, I managed to get the Eagle through and then made a straight shot for the staging system.

I am now reasonably well set up in Curse.  I have a couple of fleet doctrine ships, a stealth bomber to go snoop with, and El Supremo says he has a Scimitar I can use if we need logistics pilots.  I have clones in place and I did not even have to self destruct to get to our deployment.  Now maybe I can get down to actually shooting something once in a while rather than writing travelogs about my journeys across space, because I have clearly used up my pool of luck when it comes to travel.