After various rounds of hauling stuff to our deployment in Curse, I think we were mostly settled, cloned up, and equipped by the time the weekend arrived.  A mass of pilots from our alliance are in the region and there are even ships up on contract to replace losses.  We seem set to do whatever it was we set out to do.

Which was what exactly?

El Supremo, CEO for Life Gaff, says that I am a traitorous blasphemer when I ask such questions, and then suggests that I maybe I haven’t been in the right fleet yet.  For me, a few fleets into the deployment, I would characterize the whole things as, “Men Staring at Gates.”

It is a different form of warfare than what I am used to.

In the great sovereignty campaigns I have been on so far… Branch, Tenal, Delve 2012, Tribute, Vale, Fountain, and Delve 2013… there have always been goals and objectives.  There were battles that hinged around timers that yielded either success or failure.  The campaign moved forward or was pushed back.  Systems changed hands.  The tempo of battle continued around the clock.  Those were real wars.  If we sat on a gate or on a titan for hours on end, we were usually told the reason why.  I was always good with that.  It felt like we were helping “move the ball forward,” to use a sports metaphor.

For this deployment… well, we’re just there to get “good fights,” train up some FCs, and, I gather, to demonstrate that we are a PvP alliance that can go do things with Goonswarm… which is deployed four jumps over from us in Curse.  They are in G-0Q86 and we’re in XX9-WV. 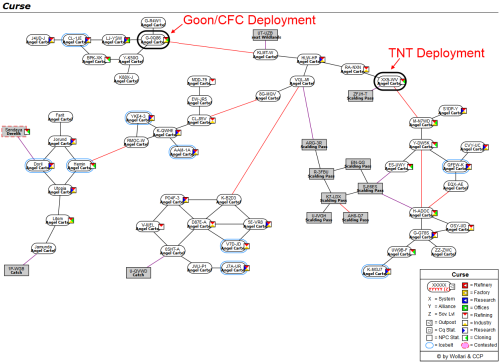 But without strategic goals, we are left to a “catch-as-catch-can” approach to fishing for PvP.  This often translates into sitting on a gate for hours on end, or jumping through a gate, running to another gate, and then back again.

This is, of course, the downside of open world PvP; it really depends on somebody else showing up.  With the often derided element of sovereignty warfare, all those reinforcement timers, at least both sides had to show up at the same time in the same point in space to contest an objective.  It was show up or lose.  Now we have no leverage to get people to show up.  So I spent a lot of time this past weekend sitting on gates waiting for something to happen.

In fact, I have been hesitant to mention our deployment system… operational security and all that… but now I am posting where we are on the map.  Come and shoot us, please.

On the various gates we caught a singleton coming through now and again and managed to blow up his ship and pod.  With 30 to 40 ships hanging out, the challenge there was to target fast enough to get on the kill mail.  My speed in control-clicking was my key to kills for one evening.  The next day I opted to fly logistics which meant no clicking at all, since nobody took any damage over the time I was in the fleet.  Success in that I guess.

All of which does highlight the importance of jump gates in the scheme of null sec PvP.  They are the choke points in travel that allow you to catch people.  This is actually one of the reasons that Siege Fleet was so successful in Fountain and Delve this year; all those bombers can avoid jump gates by using the black ops battleships to bridge around from system to system.  A well run Siege Fleet is tough to catch; it can disappear at will and doesn’t have to go through that gate you’re sitting on.

I was grousing to El Supremo about the boredom of just sitting on gates.  You can’t really chatter on coms all that much, as the FC needs to be able to tell us when when things might happen.  So we sit on the gate quietly getting updates from scouts in adjacent systems.

El Supremo was of the opinion that a good portion of such a fleet had alts up in another window mining or running incursions or doing whatever it is they do to earn ISK… or maybe playing other games altogether.  Not a ringing endorsement I suppose, and also a reminder that, among other things, this deployment is something of a ISK drain.  I think the official reimbursement policy is “stop being poor.” So I might have to look into further ISK making opportunities myself.  I had a recent ISK windfall, but otherwise my income is pretty minimal, consisting mostly of data cores and selling stuff I didn’t realize I had sitting in a hanger.

And, of course, if I am on and we actually do get a good fight, my view on the whole deployment might brighten considerably.  But for now it has been mostly flying back and forth, sitting on gates, and taking screen shots, all of which hasn’t been helped by the fact that the GSF fleet calls on Jabber sound a lot more fun than our own.  I think their directors have a flare for the dramatic that we lack.

Plus… you know… unironic Ferox fleet.  I feel like I am missing out on that.

So I am waiting for that legendary “good fight.”  Until then, cue the obligatory post card shots from Curse. 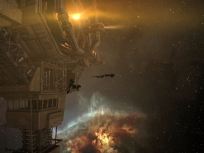 The gate dwarfs a Harpy and a Burst 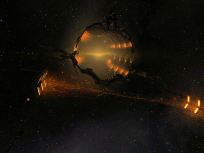 Another gate to stare at 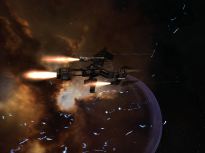 My Burst cruising around a bubble 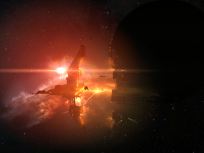 A gate backlit by a red star

Shooting up an unlucky Moa

Sitting in a bubble on a gate

Landing on a gate 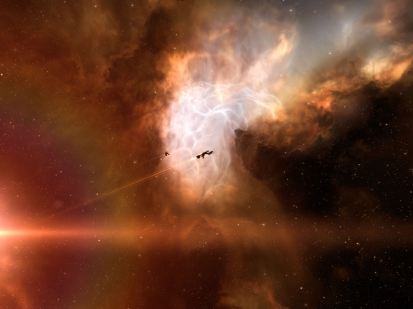 Burst and Harpy in warp to a gate 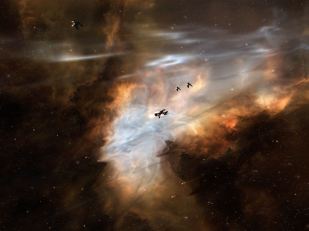 And warping back again

My Burst cruising around a gate

8 thoughts on “Postcards from a Gate Camp in Curse”