After last weekend’s plateau in War Thunder, where I settled upon the US tree for a while, I again began to wander.  Being in what I would call the “World of Tanks” model, where you earn experience that lets you unlock bigger/faster/better planes, I started thinking about where I wanted to go as opposed to what I wanted to do at that very moment.

And what I decided I wanted to do was drop bombs.

While I had been doing better with the P-26, I still had more time invested in the British tree.  I had even invested in the first rung of the light bomber line, the Fairy Swordfish. 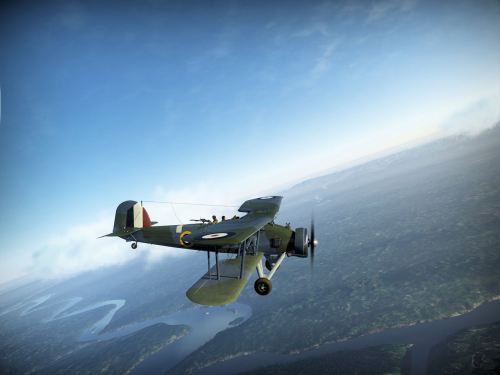 I did not have a lot of luck with the Swordfish, which is part of why I jumped to the US tree for a bit.  The Swordfish is a torpedo bomber and comes by default with a torpedo slung between its under carriage.  I have yet to end up in that plane on a map where there is anything to torpedo however.  So that tends to get jettisoned at the first sign of trouble.  The plane is also slow, not very well armed, and a bit fragile.

Dear, the tail’s come off again

The Swordfish did introduce me to the joy of gunners.  At the low tiers even the sting of a single .303 in the rear cockpit can be quite a surprise, and my gunner sent a number of attackers packing.  You can, if you want, take over the gunner’s role.  You switch spots, the plane goes into a straight and level autopilot, and you get to aim the rear gun.  However, I found that the CPU gunner was doing okay on his own and that I was better off moving about rather than flying in a straight, predictable line.  And the gunner thing got me to focus back on the British tree.

More after the cut because the 8 year old in me keeps making me take screen shots of airplanes.

So into the British tree.

A bit of work and I was flying the two engined Blenheim.

The Blenheim ended up being the bomber I wanted… for the moment.  Like World of Tanks, War Thunder classes aircraft by tiers (or ranks in this case) to keep planes of comparable capabilities in a single match.  But, like the other game, War Thunder will also jump you up or down a tier in order to get matches going sooner rather than later.  When the Blenheim gets dropped down into a match of starter aircraft, it is practically invincible.  I started off flying high and bombing, but ended up dropping down to tree top level and just trolling little biplanes, daring them to blaze away at me while I destroyed ground targets.

And that latter is the key.  On almost every map, blowing things up on the ground is the key to victory.  Shooting the bad guys down is great, but victory goes to those who defeat the enemy’s ground forces, and I was doing okay on that front.  So when I ranked up again, I went and bought the next plane on the light bomber tree, the Bristol Beaufort.

Like so many of the planes in this game, I built a model of the Beaufort when I was young.  I remember that the box even had a little rhyme about the plane, allegedly from the war.

Little Beaufort loves dangerous sport
And knows where to find it.
Trust it to roam and it will come home
With a flaming wreck behind it.

The Beaufort served me well, though in lacking a frontal gun for the pilot, it meant more cruising around at altitude to drop bombs.  Plus it started to drag me up the match making tree.  And once I ranked up and decided a Spitfire was the thing to have, my Blenheim started to feel a lot less solid. 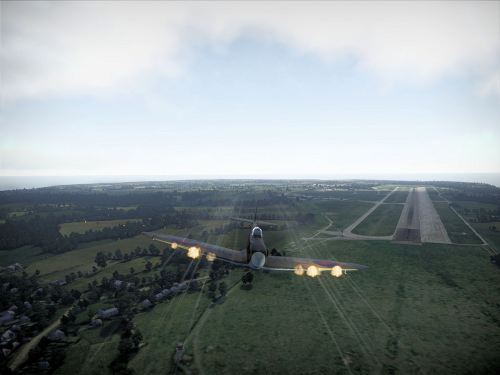 Spitfire… because why the hell not!

How War Thunder works is that you have three or more crews to handle aircraft.  When you get into a match, each one of your crews can fly in it.  So if you start with crew one and their airplane and it gets shot down, you can join in again with crew two and the aircraft they support.  So you get multiple bites at the apple in any given match.  But the match making is done based on the highest tier plan you have crewed up.  So when I traded the Swordfish, tier 1, out for the Spitfire, tier 4, I was suddenly in higher tier games. 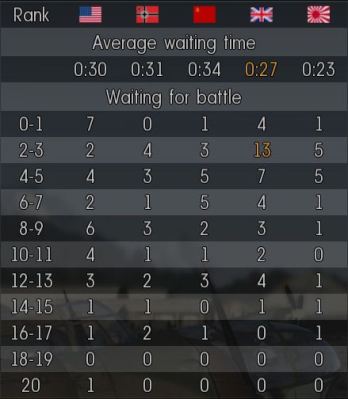 Tiers, or ranks, queued up

And the Blenheim began to show its weaknesses.  As in the real world it worked fine against 30s biplanes, once facing cannon armed foes it was more of a target than a contender.

Meanwhile, the lack of pilot gun on the Blenheim began to make me quest the UK’s commitment to ground attack.  That lead me to the Russians, who ended up as fanatics on the subject.  I ranked up there, starting with the BB-1 and then leading to its upgraded version, the SU-2.

SU2 in a snowy setting

Four forward guns for the pilot, a gunner in the back seat, and bombs to drop, that was a setup I liked.  While the actual SU2 was pretty much wiped out when facing the Germans early in the war, in War Thunder it does okay.  Success against ground targets with that lead me to pick up the Pe-2.

The Pe-2 is a fast light bomber with a nice heavy machine gun up front to take out ground targets and a gunner in the back to protect you.  The only thing it lacks, at least initially, is bombs.  Odd that.  But you have to level the bird up a bit before you unlock the ability to hang bombs off of it.

Which is about where I sit today.  I am enjoying the ground attack and bombing aspect of the game, which is something I can do competently for the most part and which hasn’t required me to invest in a joystick.  I did also spend a bit of time playing with the scenarios, which I found a bit less satisfying.  It isn’t the same if there isn’t another person at the controls.  Plus, seeing how I did, I am not sure the Battle of Britain would have come out the way it did if I had been there.

More pictures of my weekend of flying. 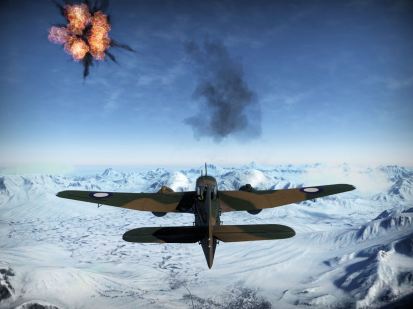 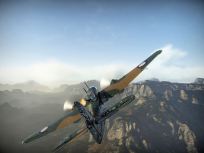 This counted as a successful landing 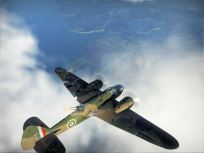 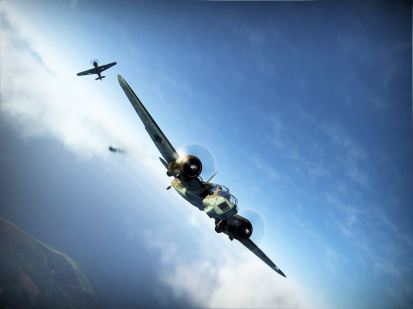 A Hurricane shears off

I put some holes in him