We were out shopping a couple of weeks back and stopped in at the Spirit Halloween store.  It is one of those seasonal stores that sets up for a holiday in an otherwise empty store front and then goes away once the holiday passes.  My daughter was looking for something for a Halloween costume.  As we wandered around the store, I found the whole place depressing.

The store was hastily put together, ending up feeling very “fly by night,” which of course it was.  The merchandise struck me as very cheap (in quality, not price) and often tacky in ways that offered no real redeeming humor value.  And the whole thing was set up in the former location of one of the two great hobby shops in the valley when I was growing up, adding another layer of despair to the whole scene in my eyes.

And, while I am sure I could work this into a “subscription to F2P” cash shop metaphor, that isn’t where I am going today.  This is more of a holiday depression themed post.

Though, really, depression is too strong of a word.  It is more like malaise.

We jumped back into World of Warcraft early in September, which put us in line for a round of Azerothian holidays.  At the time I thought that would be a good thing.  I have fond memories of many of the holiday events in WoW.  The instance group pursued many of them over the years.

However, once the holiday parade began, I started to feel a little different.

First there was Brewfest, which I headed out to see the day it got set up.  It was outside of Orgrimmar.  The music was playing (which is the one bit I couldn’t get enough of) the booths were set up, and the quests were ready to go.  I started out on the intro quests and quickly began to feel like I had done all of this before.

Which, of course, I had.

I checked out the now account unified achievements and saw that I had pretty much done it all.

I had raced the rams, captured the worpletinger, fought the dark iron, killed Coren Direbrew repeatedly, and even got the Swift Brewfest Ram.

So it was one of those things where there was really nothing new to do, the event itself seeming relatively unchanged since I last ran through it vigorously some four years ago.  And with unified achievements and shared mounts across accounts, I had all the goodies right down to the Brewmaster title.  So I listened to the Brewfest music a bit and went on my way.

Likewise, when Hallow’s End showed up after Brewfest, I felt like I had done just about everything.  I am one achievement shy on Hallow’s End, having earned 18 of 19 already.  And that last one is for the candy buckets in Pandaria.  And while I am sure that the Headless Horseman has some new/different drops this year (as no doubt Coren Direbrew did)  I actually do not have any characters high enough level to queue up for those fights at the moment. 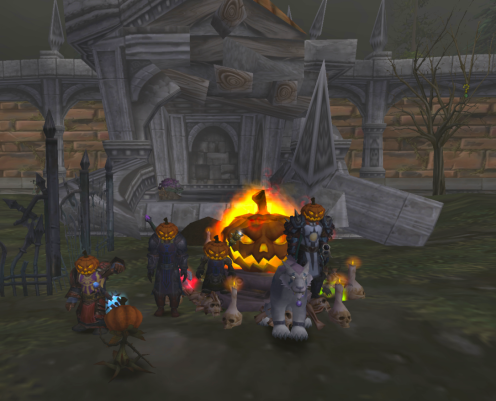 On the heels of Hallow’s End we will have Pilgrim’s Bounty, for which I also already have all of the achievements.  I will no doubt use the event as a way to level up my cooking skills on some new characters, but aside from that, I am not feeling a big thrill.  And then will come Winter’s Veil where, again, I have about all of the achievements I can realistically expect to earn at this point.

None of which is exclusive to WoW at this point.  Holiday events in most games tend to hit a final state where the changes that come year by year are pretty small, so you end up doing the same thing every year.  It just happens that WoW is the game I am playing at the moment… or at least the one that has holiday events… and happens to be a game where I have, in the past, invested quite a bit of time in those events.  To use the standard phrase, I have both been there and done that for nearly every holiday in WoW.

Which brings up the question as to what else I should expect.

Do you jump into MMO holidays every year, even if little has changed, or are they more of a “fun once” sort of thing with you as well?

And should companies change up their holiday events, or is tradition more important than newness in this case?