Another post about War Thunder without much in the way of substance in order to put up some pictures of the game I think are cool.  If the last two War Thunder posts haven’t thrilled you, you are excused and can move on without guilt.

Not that I don’t want to do those things, I just want to fly all the planes more.

There is something about the level of accessibility that tickles my boyhood obsession with airplanes.  As a lad I glued together and painted many a plastic airplane model, and War Thunder allows me to do the computer equivalent of running around the house making airplane noises while pretending to strafe and bomb my little Airfix 1/72 scale army men.  (And my train set, which was HO scale, and thus about the same relative size.)

On last week’s post I got a comment from somebody who said that coming from a game like IL-2 Sturmovik, War Thunder was easy mode.  And it probably is easy mode relative to that.  Actually, I know it is.  I own a couple of the IL-2 games, and they require far more effort to master… or to play at all with any degree of success… than I am willing to invest at my age, or at any point past age 35 or so I would say.  And that age came about for me in the last century.

So I am happy enough to go forth and play badly and enjoy myself all the same.

I did continue on last week up the British tree for a bit, training into the Beaufighter.  While it lacks in bombs (though I can level it up so I can hang a torpedo off of it) it does make up in having four 20mm cannons as part of the forward armament.

That allowed me a number of kills of opportunity as you really only need to get a couple solid hits on most planes in the same (or lower) tiers for something catastrophic to go wrong.  This let me laze about above the fray and pick targets of opportunity to try and take in a single pass with some chance of success.

While that was good fun for a bit, the itch to fly something new was still there, so it was back to the US tree where I worked a bit to get myself up to the A-20 Havoc.

The Havoc ended up being quite a bit of fun as well.  It has a decent bomb load, six .50 caliber machine guns in the nose to tear up soft ground targets or any aircraft foolish enough to show up in front of me, and two rear guns capable of doing some damage.  Being the solid nose model however, there is no bomb site for high level bombing.  You have to get down into the thick of things.

Of course, that is just fine, and quite exciting, but it does tend to lead to a short life expectancy, especially if you run ahead of your fighter cover, which I tend to do.  I have had a number of first passes that have left me with a plane shot up and damaged which I have then had to try to nurse back to base.  I do like that aspect of the game, that you can go back to base, land, and get repaired to go out again in the same plane.

Unfortunately, smoking and with one engine out, you do tend to become a target pretty quick, so the landing isn’t so much of a problem (though I need to practice bringing my speed down before I try to touch down) as is just getting home.

And once I lost the Havoc in each match, a tier 5 plane, I was left flying my other US planes, which were much lower tier.  So I started leveling those up until I had a somewhat even set across the board.  Joining the Havoc I had a P-40E, a TBF Avenger, and an SBD Dauntless. 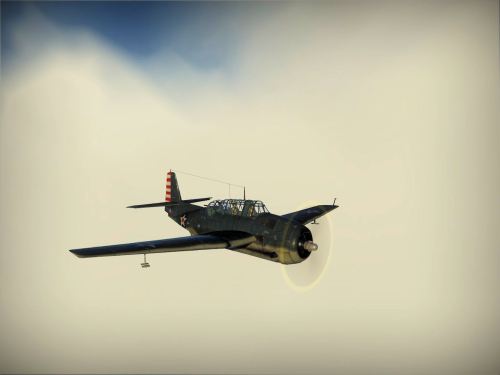 The former was an extension of the P-26 and P-36 line, while the latter two were from the naval strike line.  I did skip over the OS2U Kingfisher and two variations of PBY Catalina to get to the TBF and SBD.  I did a test flight in the Kingfisher and plan to go back and play with the Catalinas at some point, but for the moment I wanted to get everything to tier 4 or 5 so I wouldn’t be totally out of my depth on replacement planes. 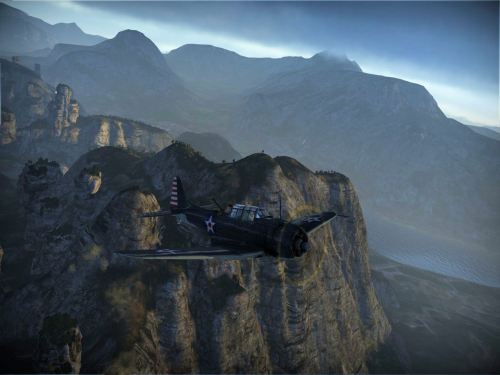 I had pretty good success with the TBF, which has a bomb sight and so can sit at altitude and drop bombs on targets below.  The SBD though is a dive bomber, which means flying over the target, throttling back, pointing the nose down, and trying to place the aiming indicator on a target.  Then you release the bombs and pull out of your dive and try to climb back up to a decent high before you get caught by fighters, and the two guns in the back seat make a satisfying noise, but don’t do a lot of damage.

And that is the set I played with through much of the weekend.  I made my way through to another level on the US tree, so I can step up to the first B-25.  But that also means going up a tier, so I am holding off on that for now.

Meanwhile, I am still interesting in flying some of the German planes as well.  That will probably be where I head next, rather than further up the US, British, or Soviet trees.  The Japanese tree is the only one that doesn’t really hold a lot of interest for me.  I never really built many models of their planes.  I had the requisite A6M Zero to play foe to my carrier planes, and I had a Rufe, which was essentially a float plane version of the Zero, but that was about it.

About the only thing else worthy of note (for me at least) is that I did have to go into the settings and change the units of measure from metric to English for most things.  The whole game is in metric by default, but does allow you to change units.  For me, it is less a matter of not being able to think in metric and more a matter of that, as a youth, I memorized all of the performance numbers of these planes in English units, so my frame of reference is entirely in MPH at an altitude in feet. I know instinctively that 200 MPH is fast in a Hawker Fury or that 340 MPH is fast in an A-20 and so on, but when displayed in KPH I have to do the conversion in my head constantly to get that bit of information.  So I just swapped.

I left all of the distances in kilometers or meters.  Youthful memories of range was always in yards, which is close enough to a meter to be not an issue, and military maps have been listed in kilometers all of my life.

But for the rest, English measure is more meaningful for somebody my age who has a lifetime invested in it.  As an exhibit for my defense in that regard, I will point to the team at Top Gear who, despite living in the UK, which officially went metric decades ago, still speak of speed in miles per hour almost exclusively.   It is likely because they are all about the same age as I am and that measure is just more meaningful to them… and their audience it seems.

Anyway, we’ll die out at some point and all my boyhood books with English units of measure will get tossed in the recycle bin.  But until then, it is just ingrained.

And, to close this off, there are some more pictures from the game, mostly of me getting shot down in new and interesting ways, after the cut. 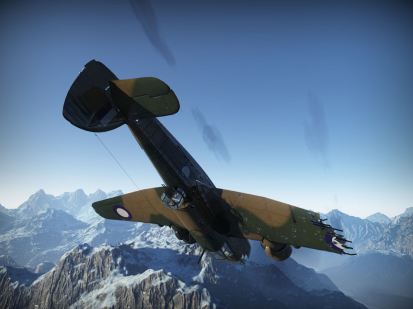 The gunner in the SBD blazes away

My Blenheim, shot up again

The Havoc with one engine out

It turned out the SBD had friends

Spitfire hammering away at a Havoc

The TBF up high

The worst of all results for the P-36 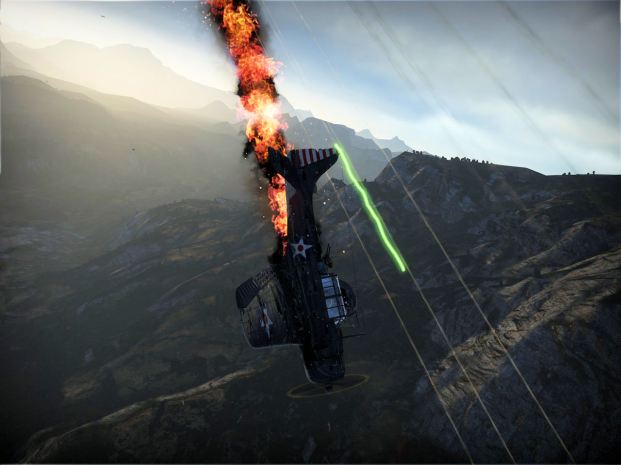