The latest Blog Banter in action right now, number 52, is looking at the current average online user plateau in EVE Online and asking what lies beyond it.  Is this just a breather in the game’s growth or is this a peak and are we now looking at the inevitable decline that afflicts all such games over time?  The main evidence of a plateau has been presented in the form of the concurrent online users graph from EVE Offline, which has stubbornly sat at about a 30K user average through a time of subscription growth and peak concurrent player records. 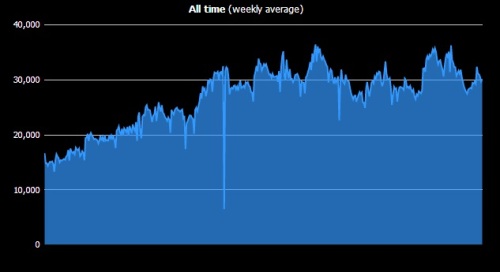 The answers from participating bloggers have varied.  While the most common response seems to be along the lines of “nothing new to see, nothing new to do,” other ideas have bubbled up.  There is no plateau.  The graph is a lie.  The pool of potential players isn’t big enough or MMOs in general have ceased to be a draw.

And there is my own view, which is the game is too hard and requires too much of a commitment to play for it to be a reasonable choice for most people.  That came up a couple of times.  And when you have to give lessons on how to play your game, that argument might have merit.

There is a reason I have been playing a lot more World of Warcraft than EVE Online lately.  It isn’t that I don’t enjoy EVE.  It is the fact that, with a limited time budget, I can log into WoW and accomplish something right away.  I have very few wasted evenings.  No hoping for a fleet only to find you can’t get to it or don’t have the right ship handy.   No waiting on a titan for an hour only to stand down because the hostiles went home.   No sitting on a gate hoping you’ll catch somebody coming through.  I can log into WoW and run an instance or do a few dailies or harvest or work on an alt.  There is a convenience factor there that is hard to beat.

So that is my response to the plateau question.  The game is difficult and niche enough to the point that you really have to love it to put up with it.  We ought to be surprised that at least 200,000 player can make that commitment. (Using the highest accounts to individuals ratio estimate I have seen, which was 2.5.)  We are not going to find a large pool of new players.  The best we can hope for is that CCP will add new features to the game that will get burnt out older players to return to the fold.

The upside is that I don’t think numbers are going to plummet barring any really bad move by CCP.  With EVE, once you have accepted the commitment it requires, you hate to give it up.

But out of all the responses to this blog banter, there was one response I expected to see repeated multiple times.  But only one post (now two) zeroed in on this.  I expected to hear a lot more about the EVE Online community.

Because it is pretty much an accepted point of fact that EVE Online is a terrible game for terrible people.  It is full of scammers and gankers and sociopaths whose sole enjoyment in life is ruining the game for other people.

So are we all blind?  Is this Blog Banter a demonstration of cognitive dissonance or some sort of mass blind spot we share?

Certainly EVE Online allows behavior that would get you banned in other games.  And you don’t have to go very far to find scams.  Local chat in any one of the key trading hubs, Jita, Amarr, Hek, or Dodixie, will have a constant stream of “double your ISK” and “Contracts for Nothing” scams in them.

But all in all, after more than seven years playing the game, player behavior that one might reasonably consider “bad” has been no more prevalent in  EVE Online than in any other online game I have played.  I have never fallen for a scam.  I’ve been suicide ganked once.  And I had my mining can flipped once.

For the suicide gank I was AFK hauling expensive cargo in a cheap ship and the can flip happened in a system that was the equivalent of a dark ally in a bad part of town for miners.  I basically stopped doing the former and moved over a few systems for the latter and was never bothered again.  Everything else that has happened to me in EVE has been done with the knowledge, or at least the acceptance, that risk was involved.

Compared to “bad” player behavior over my time in World of Warcraft, that is nothing.  People in EVE have, in general, been pretty nice to me.  Even people that kill you will often engage in a post action discussion about what happened.  But I also try not to be an ass.

So I went and Googled variations on the phrase “Horrible Community” and found that somebody out there thinks just about every game has a horrible community.  Some results:

Not at all a scientifically valid set of results, just what bubbled to the top of searches.

Oddly difficult to find for that particular term was EVE Online and EverQuest.  The top variation I came across for EVE was on the site I Hate MMORPGs, which is a great idea for a blog, but I wasn’t sure how much weight that should be given.

And EverQuest… well, I know EverQuest had community problems.  I think its absence is just a matter of that game having peaked so far back that we’re all sporting rose colored glasses on the topic to a certain extent.  We certainly saw a return to bad behavior on the Fippy Darkpaw server with players and guilds resorting to all the same tactics that were used back in the “good old days.”  And SOE had to fall back on the same responses it did back then.

Basically, all communities are horrible, if you define horrible in all the ways that were used in my list of results.  The reasons communities were called horrible ranged from  “nobody will do my heavy lifting for me” to “people say annoying things in general chat” to “somebody told me I was bad at the game” to “my personal, unpublished, and anything but universal set of etiquette rules was violated” to “people insist on speaking languages other than my own.”

When people are allowed to interact, there will be friction.  Don’t get me started on the local PTA, homeowners associations, or cross-functional project teams.

And while there are legitimate gripes about gaming communities and what we sometimes tolerate when perhaps we shouldn’t, the most common complaints sound like a bunch of old ladies complaining at the grocery store checkout.  Sorry, was that misogyny? We seem to gloss over a lot of that.

Or such is my view of the world.  I am sure somebody will come by and tell me I’m wrong.  That is part of the whole community thing.

Here are some of the other responses to Blog Banter 52:

As part of the Middle-earth discussion, Potshot brought up the Ralph Bakshi animated version of Lord of the Rings, illustrating that other efforts to adapt Tolkien’s work to a new medium haven’t always made it to the end.

The Lord of the Rings!

But the strange thing is where the Ralph Bakshi movie version ended.  Helm’s Deep.  Right where LOTRO has ended up.

Not that LOTRO is done or anything, but they haven’t announced where they are headed between now and the next panic point in 2017.

As an aside, here is the best review of the Ralph Bakshi movie.  I remember the feelings it describes quite well.