The big battle at B-R5RB continues to cause ripples in the war.  The first bit of new that came down after I got home from work was that we are moving staging systems.  We will be bidding farewell to G-0Q86 and all of its lack of charm.  There seems to be universal relief at that.

We will be heading to a CFC owned system deep in the Immensea region.  On the bright side, being in the midst of hostile systems, will ensure that there is plenty of action.

On the down side, the logistics of getting myself and some ships there may be a challenge.  Part of that is because I cannot get back to G-0Q86 in Curse directly, as I am still stuck with my Domi in B-R5RB.  That is actually further into Immensea that our new staging system, yet still far enough away, and with enough hostile systems in between, as to make it very unlikely that I could just fly there using jump gates. 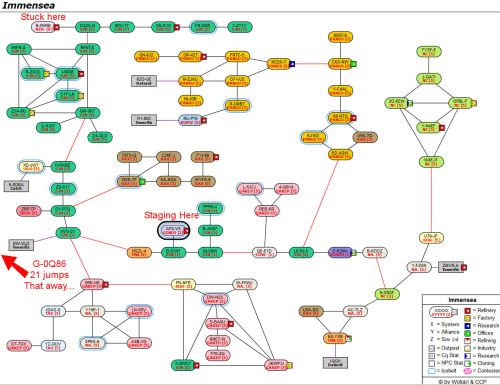 Sure, it looks like Nulli Secunda (S2N, or the green systems, on the map) is pulling out of Immensea, but that will likely mean more hostile activity and more danger in the short term.

So it is looking like I have to take a jump clone out of B-R5RB.  But I do not have one back in Curse, because I do not have standing with the NPCs who own the station so I couldn’t dump one there before we headed out for the big op, something I would normally do.  So I have to jump to one of the clones I have scattered about New Eden.  I am glad I trained up so I can have 9 jump clones.

The temptation is to jump back to Deklein, the home I haven’t seen in ages at this point, grab my carrier, which has sat in station since the day I bought it, and try to fly it down to G-0Q86.  Then I could load up my ships and make the jump to the new staging system.   That last bit is the easy part.  Getting down to G-0Q86 is the tricky bit.  I need three station stops in low sec with somebody there to light a cyno at each.  So that will take a bit of doing.

In the mean time, I did manage to contract my backup Domi to my alt, who was able to take it on a convoy to the new staging system.  So I have a Domi waiting for me there. 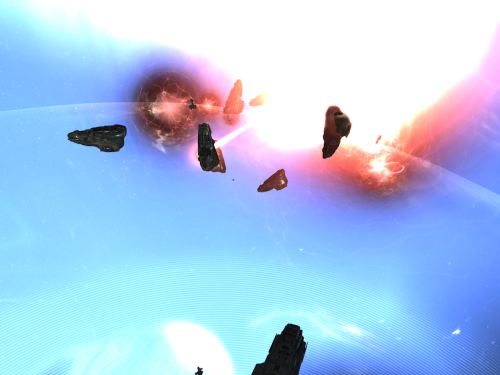 If needs be, I can fly down in an stealth bomber or an interceptor… isn’t that how I always get down to Curse and beyond… and link up with my Domi that way.  But I have a small pile of ships to deal with in Curse still and Immensea is a step or two further away from where I will have to start.  Everything in EVE Online can be an adventure though.  You just have to accept that you’re going to lose your ship, and then if you happen to get through okay, it feels like a win.

Addendum: And it sounds like Pandemic Legion will be leaving the war in the south in exchange for being allowed to extract assets from B-R5RB.