So the big brouhaha of the week seems to be the tag system introduce by Valve that allows players to tag games listed in Steam with whatever the hell they want.

But after reading several posts that pretty much convinced me that the world was going to spontaneously combust due to the absolute horror of this feature and the uses to which it was being put, I actually went and looked at the store pages for all of the games in my library.

And the results were not all that bad.

The key here is that Steam, by default, only shows you a few of the most popular tags… usually 3 to 5 depending on how long they are… and as far as I can see, the most accurate tags are bubbling up to fill that position.  So, for example, SimCity 4 seems to be quite accurate when it comes to tags.

Yes, if you click on the little plus sign, you can see all of the tags people have added.  But even those are mostly accurate.  A couple editorialize… “last good one” is on the list… but I am not sure editorials are off limits or should be.  And all the games in my library look to be about on par.  Do I care that “one more turn” is one of the tags displayed for Civilization V? That is clearly an editorial, but seems totally appropriate to me.

Sure, some games seem to suffer from users being allowed to apply tags.  I wouldn’t be very happy if I was a developer on Call of Duty: Ghost.

But I would probably be even less happy that Steam also displays the Metacritic score.

In a world where big studio titles tend to be rated on a 70-100 scale, getting a 68 is already failing.

And for those who are concerned that these aren’t the tags they are looking for, I would point out that Steam has had genre tags for ages now.

Meanwhile, it would appear that Valve went through and cleaned out some of the more egregious and off topic tags that were polluting the system.  Holocaust denial is no longer a thing in user defined tags as far as I can tell.  Prison Architect is no longer tagged with “Not-a-rape Simulator.”

So it appears to me that Valve has decided to devote some resources to policing the tags, which seems reasonable.

I can see how the game studios are still mad about this.  It allows people to say negative things about their games!  Oh no!

Color me somewhat unconcerned on that front.

So worst idea ever?  Not really.  Crowd sourcing from idiots?  On the whole, no.  Whatever Tobold’s point was… as I mentioned above, Valve already had tags… handled… I think.  That Tumblr site devoted to bad Steam tags?  Taken down.  The world? Continues to turn.

Addendum:  And I forgot to mention, if you’re really worked up about a tag, you can report it. 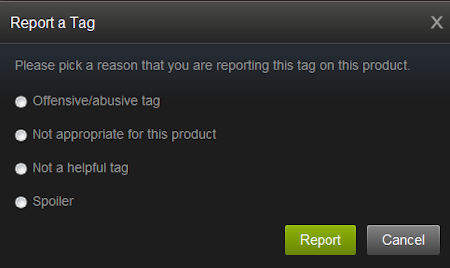