It has been 30 days since the Pantheon: Rise of the Fallen Kickstarter campaign came to a close.

In its 40 day run, the campaign managed to drum up $460,657 in pledges from 3,157 potential backers.  While shy of the $800,000 target of the campaign, that is still a fair amount of cash to have been pledged.  We tend to hear about things like Torment or Project Eternity, which brought in millions of dollars, but Kickstarter is full of little campaigns for $10,000 or less.  According to Kickstarter, projects that raise $100,000 or more represent just 2% of successful campaigns.

Basically, raising close to half a million dollars is a pretty decent achievement.  If the target of the campaign had been $500,000, we might even now be speaking of a successful campaign and stretch goals and, if not Chris Robert’s levels of post campaign funding, then maybe at least Lord British levels.  Shroud of the Avatar has managed to rake in post campaign donations to the tune of nearly 50% of what they raised in that first 30 days.

But the campaign was not a success.  The 40 day run wound up with Brad McQuaid and his team getting no money from Kickstarter.  So the question quickly became, “Where do they go from here?”  There was talk of relaunching another Kickstarter campaign a bit further down the road.  That would address some of the errors made early on in the initial campaign, like the whole “Hey, surprise! We have a Kickstarter campaign without any real press build up!” aspect.

The choice that was eventually made was to self-fund raise.  You can head on over to the Pantheon: Rise of the Fallen web site and pledge money to the project.  Well, give money to the project.  This isn’t Kickstarter any more.  You let go of your money the moment you click the final button.  There are no goals to meet or critical mass to achieve.

That last bit seemed like an important tidbit to me.  There is an aspect of “we’re all in this together” when it comes to Kickstarter, where success means a lump sum for the team and failure means nobody gets billed.  It protects the early enthusiast from handing over his money too soon, only to find out that the project isn’t popular enough.

So I was curious to see how well Pantheon would do once it lacked that aspect of the Kickstarter campaign.  As of this morning, donations to the project are: 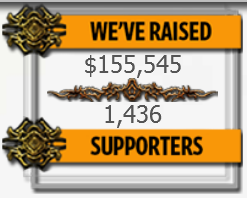 That’s not… bad.  Those numbers would still put the project in the top 2% when it comes to Kickstarter.

But it is also less than half the supporters and roughly a third of the money pledged at the end of the Kickstarter campaign.

Is this a failure of communication?  I am not sure how Kickstarter works when your campaign does not fund.  Are you allowed to continue doing updates to the project, or is it closed down hard?  Because the last update was at the end of the project, 30 days back, and nothing since.  If you missed that terminal “you can now give us money at our site” update, you might think things are done.  And it is pretty much a reality of the universe that some percentage of a group won’t get the message no matter how directly you send it out.

Is it the missing Kickstarter aspect of the fundraising that is holding things back?  Does being on Kickstarter give not only more exposure but also an adding sense of legitimacy?

Did the fact that campaign failed to hit its goal turn a bunch of people away from the campaign?

Or is this a matter of reality striking home, where we are no longer being asked to pledge to a funding effort that may or may not come to pass but being asked to part with actual coin of the realm in pursuit of the stated project goals?

6 thoughts on “Pantheon: Rise of the Fallen a Month Past Kickstarter”