We have had a bit of a gap since our last full instance group run.  Birthdays, marathons, and some other outside activities have intruded.  We have done some things together.  Operations in search of mounts, bags, and rep are always an option.  But it hasn’t been the full group for almost a month.

And I wasn’t sure we were going to have a full group up until nearly the last minute on Saturday.  I was in a game of Age of Kings with that group, where we were working on build strategies influenced by our obliteration at the hands of MoronHunter and friends, when suddenly everybody in the instance group was online.  Time to go!  I quickly built a wonder, thanks to my booming economy, and let that match run out in the background with my apologies while I got World of Warcraft up and running.

We were on for the night, and our group was:

No boost in levels for anybody since last time.  I think I mentioned this before, but an interesting side effect of the huge inflation in numbers when it comes to Mists of Pandaria is that, at level 85 and beyond, experience gained from doing Cataclysm content is almost negligible.  You have to get into Pandaria to move that experience bar beyond a rate measured in single digit pixels per hour.  The situation is almost EverQuestian in that regard.

Anyway, despite everybody getting logged on at the appointed hour, we ended up mucking about for drinks and bathroom breaks and at least one computer reboot to clear up a sound issue.  I was able to watch the end of the Age of Kings match and close that out as we got ourselves settled.  Earl and I got on the bird to get out to the summoning stone at our target for the night, which was Zul’Aman.

Zul’Aman is rated level 85++, where 85+ is a standard heroic mode dungeon.  Given that, even with out item level 372 gear upgrade from Pandaria, we still ran into problems in the heroic Deadmines, I was a bit concerned that an instance considered to be a challenge relative to that might be an issue.  But we were going to give it a shot.

Earl and I summoned the rest of the party out to the stone and off we went.  Well, we bounced of the entrance for a minute because the group leader (me) had not set the instance mode to “heroic.”  It seems odd that a heroic-only dungeon should care about that setting, but whatever.  At least the error message was informative, so I switched modes and we were able to enter.   We picked up the quests in the foyer of the instance and then the gate was opened and we were set loose. 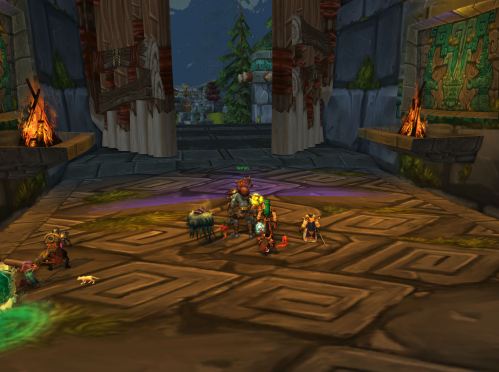 Our efforts in detail after the cut.