Every year on March 16, I write something about EverQuest’s anniversary.  Even when I am not actually playing the game… even when I haven’t been playing the game for ages… I will write a post about my memories of the game, how big of a deal it was back in 1999, and will often patch up, log in (that is at least is easy with F2P), and take a screen shot of the latest anniversary banner. 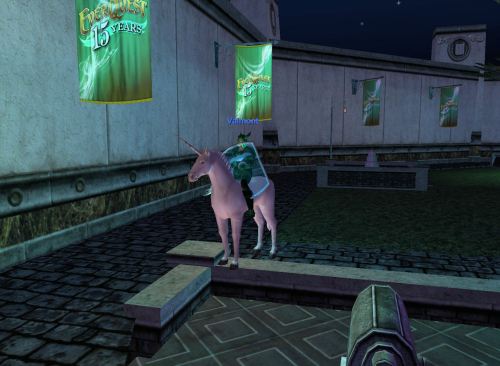 Likewise, there is a good chance that I will note, even if just in passing, anniversaries for EverQuest II and Lord of the Rings Online and occasionally even Star Trek Online, though I haven’t really played that last once since launch.

But I did play it at launch.  I played all those titles at launch.  And, in having done so, I feel some sort of special attachment to those games.  There is something about being there on day one, which is almost always, in part, a story of shared misery and overcoming flaws in order to play the actual game, that endears a game to me in some way.  Meanwhile, games that I started after launch… after the trauma of launch… well, I probably wouldn’t mention anniversary events for games like World of Warcraft or Rift if they didn’t make a fuss about them in game, and I never mention such anniversaries  if I am not actively playing the game.

Such is the case with EVE Online.

I started playing EVE in August 2006, just towards the end of the third phase of CCP, the march to 200K subscriptions, according to one of CCP’s 2014 Fanfest slides. 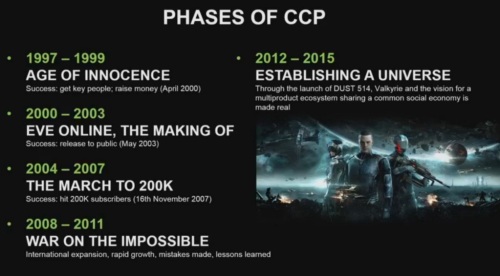 The Phases of CCP

August 2006 put me past the dark ages… and truly rough edges… of the early game. (Some more early pics here.) 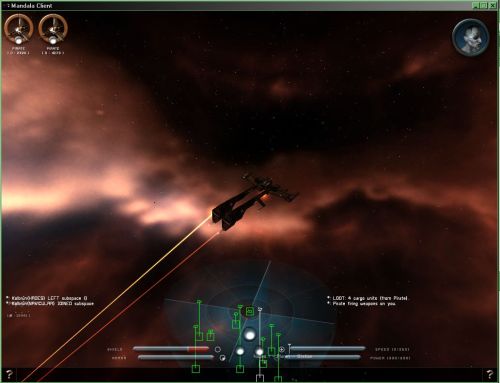 A Rifter during beta

The game itself launched in 2003, which meant I missed a good chunk of the early tales and events and suffering. But a lot of things have happened on “my watch” in New Eden.  While titans were part of the Red Moon Rising expansion that came out about 8 months before I started playing, the first titan wasn’t “born” until I was playing.  I Remember hearing about Steve, the first titan in game and the first to die. 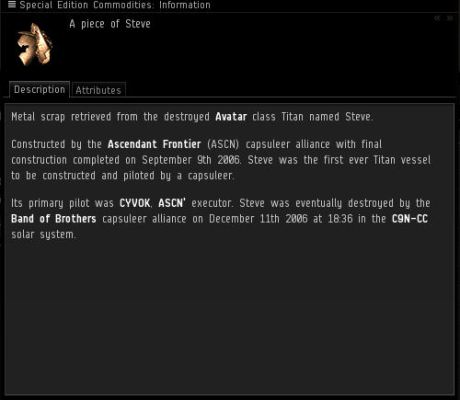 A Piece of Steve from the EVE CE

Meanwhile, it was still rough compared to things now.  I got to live through the end of the “no warp to zero” age, where the closest you could come to something by default… a gate, a station, whatever… was 15km.  So you either had to motor along slowly that last fifteen thousand meters to you destination… there is a reason I trained up every possible speed related skill very early on… or you had to have pre-made bookmarks for any regularly used to and from points which would warp you to a target in space exactly 15km beyond your intended destination, allowing you to land right on it.

I have also seen the dawn of things like wormhole space and factional warfare, as well as various changes to the graphics engine. 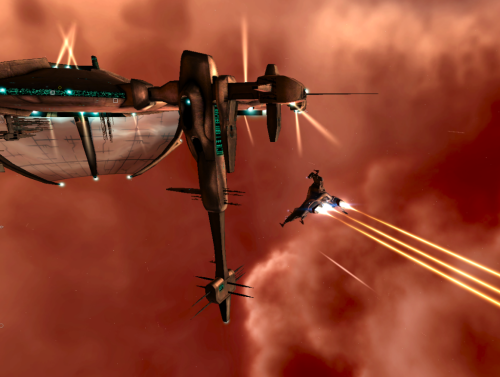 EVE as I found it

And I have been there for some of the big events in EVE Online, things that ended up generating headlines in the mainstream press, things like the first Burn Jita, or the battles at 6VDT-H and B-R5RB.

But even after all of that, even after more than seven years playing the game, I still feel like a bit of the outsider, like the a new player who still has so much to learn.

That is in part because of the depth and complexity of the game.  While I have mucked around in many aspects of the game, there are many more that I haven’t immersed myself in.  And even things I have tried and left behind become mysterious as the game changes and evolves so that my knowledge falls out of date.

But it is also in part because EVE is such a player driven game.  Much of the lore around the game involves conflicts between player organizations and in-game personalities.  You cannot go back and run an old raid or go through a low level quest line to come up to speed on this either.  Nor can you ignore it completely and be part of aspects of the game such as null sec, as past actions influence and inform what is going on today.

So I am not sure that I have bothered to note an EVE Online anniversary until last year because I still feel like the new guy.  And last year CCP made a big deal about the anniversary, having hit the decade mark, which in turn got both a post and a video out of me as I was there for the celebrations in Amarr.

This year is the eleventh anniversary, and aside from the potential for Spinal Tap references, the occasion is being marked in a more subdued way.  CCP has an anniversary dev post up and players are being given a few special drones along with some community activities to allow all players to collect a few more. (The max total will be 11.)

I am never quite sure how I feel about such items.  These might be the biggest, baddest drones ever to hit the game, but the game is driven by destruction so using them means most likely losing them. (How many drones have I lost over the years to smart bombs, fleet warps, and my own ships exploding?  Many, many.)  Which means I will probably tuck them away in some safe, high sec station as a keep sake… or a potential long term investment… and go on using normal drones.

Anyway, I think it says something about a game… or maybe just about me… that after more than seven years of playing that I still feel like a noob with so much to learn.

I am not sure that would be any different had I been there for day one.

5 thoughts on “On Being There – EVE Online Goes to Eleven”